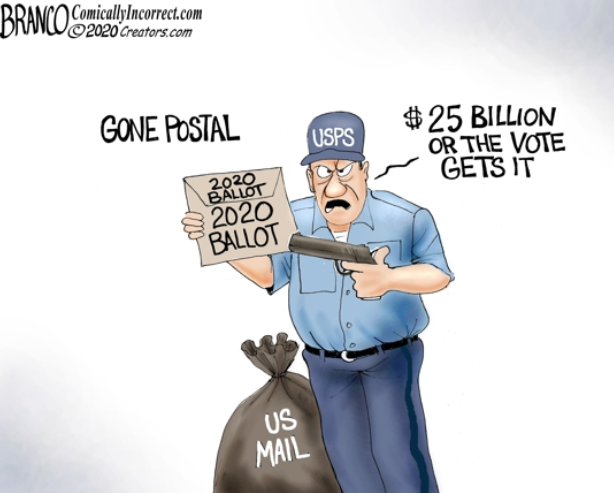 Nancy Pelosi called all 435 members of the House back to Washington last month to give one of the most inefficient agencies in government another 25 billion dollars. I’m talking about the U.S. Post Office. And the additional $25 billion she wants for the USPS is on top of the $10 billion they have sitting in the bank.

Her reason for the urgency? Princess Nancy claims Donald Trump is trying to restrict voting rights because he opposes requiring all people to vote by mail.

Let’s make very sure we understand; Pelosi has spent millions of our tax dollars to bring back 435 members in the middle of another undeserved vacation to give the post office money they don’t need, but she refuses to vote on extending unemployment benefits to American citizens who really need it to feed their families and pay their rent.

Meanwhile Pelosi is content eating her $12.00 a pint chocolate ice cream while American families wonder where their next meal will come from.

Pelosi could not care less! If you doubted the existence of deadly swamp creatures, you no longer have an excuse. Pelosi is the perfect snapshot of the swamp creatures we need to drive out of Washington DC.

Here is what Nancy advocates. Each state sends a ballot to every registered voter in the state, whether they’re dead or alive, or still live at that address or have moved. She also supports allowing campaign workers, union members, or anyone else who cares to do so; to go door to door to collect those ballots – even to help voters fill out their ballots.

Then local election officials are required to receive those ballots, and count them, without any consideration of whether they’re fraudulent, legal or legitimate.

But what’s to stop people from scooping up 50 ballots at an apartment building before they’re voted. And what if that effort is multiplied by 50 or 100 or 1000.

That not only could happen, it has happened. In New Jersey, in Texas, in New York, in Illinois, in California, and who knows where else?

And as dangerous as ballot fraud can be, simple inefficiency can also undermine election credibility. We still didn’t know who won the election in a Brooklyn legislative seat 6 weeks after the election. In fact, tens of thousands of ballots arrived to New York election officials after the date of election date. Election officials disqualified the ballots because they didn’t arrive when the law required. A judge overturned that decision and ruled those illegal ballots must be counted.

Nancy, however, blames Trump. She’s trying to set up an election in which no one is sure who has won. If Biden wins, she believes Trump will contest the election results in court. If Trump wins, Nancy’s plan is more dangerous. She’ll unleash her goons in ANTIFA and Black Lives Matter to hit the streets and riot (or, in her words, “peacefully protest.”) More people will die, more businesses be burnt down, more innocents will be assaulted, more cities will be ruined, and Nancy and her leftist friends will blame Trump. “It’s Trump’s fault for hobbling the Post Office. How dare he steal the election from good ole Joe?” Of course, she’ll sit safely in her San Francisco mansion sucking down her outrageously priced ice cream.

If people can safely riot (sorry, I mean protest), if they can safely loot, if they can safely beat the hell out of their fellow Americans, and avoid contracting the Chinese virus; why can’t they go to the polls, follow the proven safety measures, and cast their ballot in person?

And, if they’re afraid to visit the polls in person, they can always request an absentee ballot. We don’t need the state sending out millions of ballots to unvetted addresses through a post office that simply can’t handle that kind of load.

If that happens, expect Trump to win huge on election day, and the results to change over subsequent days and weeks as election officials “find” tens of thousands of uncounted ballots. You can also expect judges to decide which ballots get counted and which do not.

It all shows again how much Princess Nancy hates Donald Trump and will do anything and everything to get him out of office; even fix an election.

Everyone should google the Democrat manifesto to see why Nancy wants Trump out. They want power. Their agenda is designed to assure that once they get it, they keep it. Not just Nancy and Joe either, but all of Obama’s swamp creatures plus the new socialists like AOC and Elizabeth Warren.

First, is the total pandering to minorities. Nothing new here, they make promises every election cycle and never deliver. Second, is the drop-your-pants surrender to the unions. No school choice because the Marxist leadership of teacher unions want control over what kids learn. Next is that no government projects ( and there is about 7 trillion dollars worth) can hire non-union workers. They also want to bust all the ‘Right to Work’ states, force you to join a union, then feed your union dues to their political campaigns so they can keep passing very unfair laws.

How about free healthcare for illegals? 22 million illegals put on a fast track to citizenship; no background checks, no criminal records check, no health check, nothing except here are all the benefits you now get as an American citizen.

These are all dreams of Pelosi, AOC, Bernie and the far left who desire to see the demise of capitalism, freedom and the American constitution.

Nothing else they’ve tried so far has delivered them victory. Not Russian collusion, not Mueller, not impeachment, not Trump tax returns, not anything. After all the maliciousness of Democrats against Trump, Americans will see this latest as the least greatest.

By starting the process now, Pelosi and Democrats are setting up a phony post office slander as groundwork for a voter fraud scheme that may do what all their other nefarious shenanigans have not, remove Trump.

Greenfield: The Oppressive Liberation of the Left