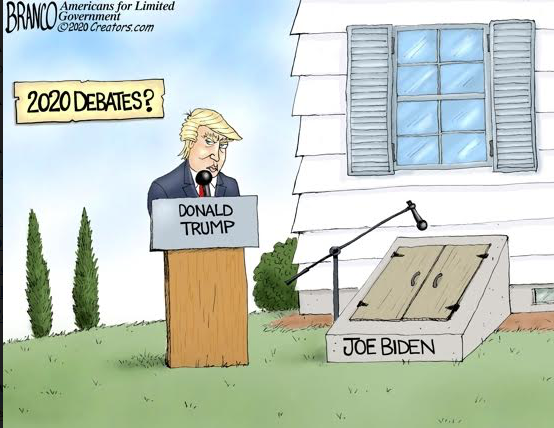 Joe Biden gave the press a rare glimpse of himself recently when he emerged from the basement to tell us how he is going to work very hard to unite the American people. Oh, if it were only true it would be a wonderful and patriotic idea. But what Joe really did was just further the great divide he and Obama started 12 years ago.

For starters, every time reporters get an audience with Biden, it’s obvious they’ve been fed softball questions before hand and that Biden has been thoroughly rehearsed to deliver the most condescending answers possible. Even first year journalism students could have come up with more relevant questions about his plans for America.

If Joe really wanted to begin mending this country, he’d have to start with being honest. For starters, he could tell Americans that Nancy Pelosi’s violation of Covid lockdown rules to get her hair done was not a set up. He could have admitted that too many politicians, including Pelosi, ignore the rules they insist the rest of us must live with. He could have admitted that those political elites who think they’re better than the rest of us aren’t.

That announcement would have scored big points with those Americans who elected Donald Trump exactly because we’re sick of hypocritical elites who impose one set of rules on us, but live by no particular rules for themselves.

Given his long history in Washington DC, It’s not likely we’ll hear that kind of truth from Joe Biden though, or any other kind for that matter.

Take the very agile flip flopping Biden has done in the last couple of weeks on fracking – agile at least for the oldest politician who’s ever run for president, and especially agile for someone who’s showing serious signs of dementia. All that agility did, however, was leave the energy world – and probably himself – confused about where he really stands.

At the CNN debate in July, Biden said, “We would make sure it’s eliminated,” when asked if he supported “fossil fuels, including coal and fracking.” Later, his campaign “clarified” his statement and claimed he was only suggesting he’d end subsidies for the fossile fuel industry.

But in a debate in March, Biden said he agreed with Bernie Sanders that we should stop fracking “as soon as we possibly can.” Biden said, “No more – no new fracking.” Later, the campaign again “clarified” Biden’s statement saying, he was only referring to new drilling for oil and gas on federal lands.

And yet, his own Green New Deal targets for zero emissions absolutely requires an end of fossil fuels before 2035 including ending fracking.

Joe’s waffling on energy is another disturbing sign that he doesn’t know what he thinks and needs someone else to tell him. Joe, “come on man,” just tell us where you really stand on fracking? Not, I was against it before I was for it. Be honest and tell us the truth that you really don’t like fracking, but may allow it on private lands only even though that will kill hundreds of thousands of jobs and make America dependent again on foreign sources of energy.

Don’t hold you’re breath while waiting for some real clarify from Joe. Remember, his saying he supported the Hyde Amendment one day, then literally the next day reversing himself? The Hyde Amendment prohibits taxpayer funding be used for abortion. It’s an important way we respect the views of those people who believe abortion is the murder of a child. Biden once respect the right of taxpayers to hold such views. Apparently no more.

Joe’s waffling also make it hard to tell if he realizes the importance of the position he’s running for. It’s especially hard to know when he does nothing but bad-mouth Donald Trump despite the fact that he and Obama didn’t come close to matching Trump’s 3 and a half year record of accomplishment during their 8 years as president and vice president.

Since the media won’t ask Joe any real questions, let me.

Joe, why haven’t you criticized Speaker Pelosi for her elitist attitude about the virus rules? Even you must be smart enough to know she wasn’t set up.

And, finally, Joe, if you really want to encourage unity, why are you spreading the lies by anonymous sources who claim Donald Trump said terrible things about our fallen vets that he did not say – and that even Trump enemies like John Bolton who was present at the time, admits he did not say?

This is so typical of your dirty tricks campaigning. “Come on man,” tell the truth. Apologize to the President and the American people for lying about a man who rebuilt our military after you and Obama decimated it; who has given our military 3 pay raises; and who reformed and repaired a corrupt and incompetent Veterans Administration you and Obama allowed to fester.

We won’t hold our breath while we wait. You can’t handle the truth because you know as well as we do the truth won’t get you the votes you need to win.