President Trump announced an historic agreement between Israel and the UAE last month.

No sooner was the news released than Biden announced he deserved the credit. But let’s first get the facts clear. The Obama Administration, for eight years, snubbed Israel in the UN, cut support and even disinvited Israel’s Prime Minister from visiting the US. Obama and Biden hated Israel. They much preferred allowing Iran to capture a bunch of American sailors and embarrass the US Navy. They also shipped Iran 180 billion in cash. Everything Obama and Biden did was anti-Israel and worked to undermine the chance for mideast peace.

To suggest Biden is in any way pro-Israel is like saying he opposes abortion and supports gun rights. In other words, the idea Biden deserves credit for the UAE – Israel accord is insane.

The U.S. Post Office, a government enterprise, has been losing billions of dollars each year for decades. Oversight for postal operations is the responsibility of Congress – Nancy Pelosi and her Democrat colleagues. No real surprise the post office is in shambles.

Now, all of a sudden, Nancy and her Democratic buddies want to give the post office billions of dollars in hopes it will be better able to correctly process the hundreds of millions of ballots that Nancy, Joe and Kamala demand for their universal vote-by-mail plan. Everyone knows it can’t work – especially those who work at the post office. They’ve repeatedly warned that vote-by-mail deadlines imposed by state authorities are completely incompatible with postal capabilities. In some cases, states allow voters to request a ballot 5 days before the election, but don’t count ballots received after the election. The post office says it needs at least 10 days to assure ballots are delivered before the election, 5 days is laughable.

Even more to the point, no government agency can be expected to retool itself to more than quadruple it’s capacity in less than a month – no matter how many billions Congress throws at it. We know too much of how government agencies work.

Hell, the government can’t decide anything in a month, much less implement fixes in a government agency that has been broken for years. Those billions would be far better spent finding an alternative to the post office; one that saves money and serves people.

To believe otherwise is as insane as to believe Biden supports Israel.

In cities all over the country Black Lives Matter are telling white home owners their homes don’t actually below to them. Rather homeowners should turn the keys over to BLM members protesting on the front lawn. They further demand that all the whites in the neighborhood pack up and move out.

Their rationale seems to be that blacks used to dominate the neighborhood, but were driven out by people who bought their homes and upgraded the area. So, to take this to its logical conclusion, when middle class people buy in run down and blighted areas of a city, then invest their savings to upgrade those homes and improve the community; they should just step aside and give their new homes to any black person who demands it. Got it! Also, insane.

In Wilson, North Carolina, a man who happened to be black shot and killed a 5 year old boy who happened to be white. The boy was riding his bike in his own yard. The insanity is that no one seems to be paying attention. Not the media, not the anti-gun crowd, not the high-profile race-justice warriors like Al Sharpton, not the liberal governor of NC, and certainly not BLM. The murder doesn’t fit their narrative of institutional systemic racism so the the life of a 5 year old child doesn’t warrant their outrage, or even much attention. Insanity. 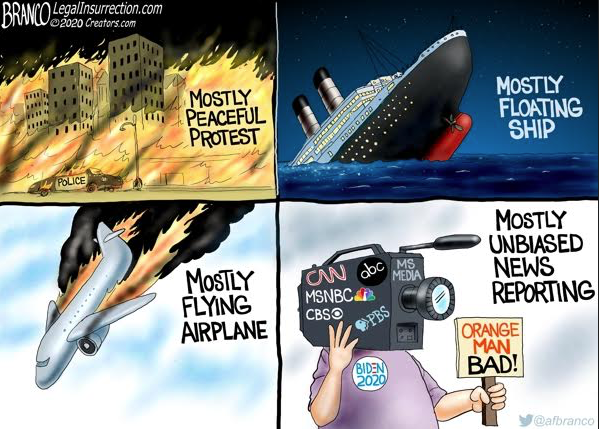 George Floyd got three televised funeral services, all televised because he was killed by a white cop. At no time during his many funeral services did anyone ever mention George Floyd’s past criminal acts. His death, nevertheless, has been decried from one end of the country to the other, as it should have been. By President Trump, by countless law enforcement officers, and by tens of thousands of protesters. But why is his life worth more outrage, protest, and grief than the life of a little 5 year old boy? The silence, and hypocrisy, are insane.

Joe Biden and Kamala Harris are all in favor of both confiscating guns and defunding police either of which by itself would make our lives far less safe. Doing both is akin to declaring it’s open season on law abiding citizens.

They’re doing the same with schools. They want to ban cops from school property (thank you teacher unions.) They want bail reform so if you get arrested, you get out with little more than having your picture taken. What these two brain surgeons don’t realize, or don’t care about, is that those hurt most by the crime, killings and gang activity these policies unleash will be inner city residents. I can think of no better word to describe police defunding than insanity.

Speaking of union insanity and Democrat education policies (one in the same,) Biden and Harris also oppose school choice which provides the chance kids will get a far superior education, more discipline, and greater hope for a better future – especially in inner cities where schools are failing. Why? Greed and politics. Teacher unions don’t want charter schools, private schools, or parochial schools because they tend to be non-union. That means teacher unions can’t demand teachers pay dues and teach the kind of Marxist nonsense they force union controlled schools teach. What’s more, no dues means no huge contributions from unions to Democrats – currently in the millions of dollars. That so many teachers are now avowed socialists and Marxists, and that politicians are letting this happen makes me question their sanity.

Should they win, though, the ultimate insanity will be the election of Biden and Harris. Americans will pay higher taxes – not just the rich either, but all Americans. We’ll get trillions more in debt as they launch their Green New Deal – a $7 trillion plan that will destroy our economy, make us dependent on foreign energy producers, and result in blackouts and far higher costs. Families won’t get school choice, law abiding citizens will lose their guns, our military will be trashed, China will be empowered, police budgets will be slashed and funds “redirected” to things like midnight basketball, borders will be opened, illegals will get free health care and free college, and of course we’ll all be able to welcome back the return of the government corruption we experienced under Obama-Biden.

It’s insane. But it’s not impossible. Democrat insanity is alive and well. And it seems to be contagious.