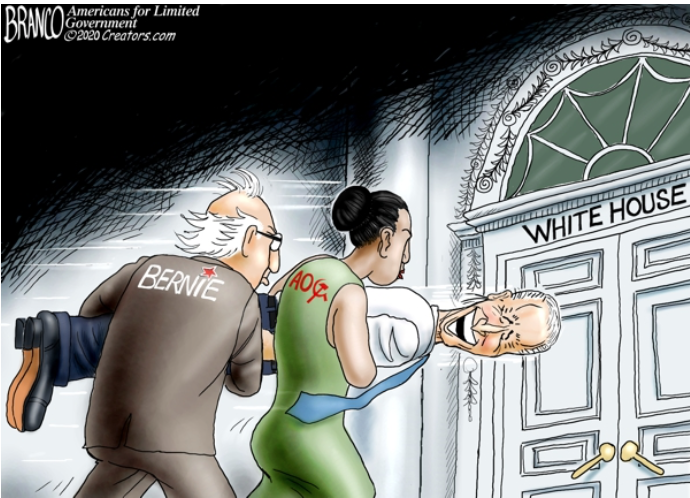 2020 represents Joe Biden’s forth time running for president. Everyone knows this is his last chance.

Joe’s previous three runs give the word disaster a bad name. In 1984, Biden tied for last place earning one delegate. In 1988, Biden doubled his delegate count, he received 2 votes. In 2008, Biden came in 7th out of 9 candidates in New Hampshire before dropping out.

Other than his utter lack of accomplishment, leadership, or creativity; two things account for Biden’s disastrous performance.  Lies and plagiarism. Joe lied, then lied some more, and then got caught. Then Biden used other people’s speeches and claimed them as his own.

Joe’s 2020 campaign is proof that the more things change, the more they stay the same.

Joe is pretending to be the law and order candidate even though he’s said hardly a word in 4 months about the violence, looting, riots, killing, and destruction happening in our cities.

Heaven forbid he utter the words ANTIFA or BLACK LIVES MATTER, and call them out as the organizations who have corrupted peaceful protests into full blown riots complete with looting, burning, and murder.

In fact, murder and mayhem aren’t the only things Joe is silent about. His handlers have pretty much kept him safe, locked in the basement since Super Tuesday. Now, suddenly, Joe’s handler’s see the polls moving in the wrong direction and have let him emerge from the basement, complete with teleprompter and flag bunting.

Only one condition: No questions please – at least none that haven’t been scripted, sanitized, and pre-approved.

Joe and his team are now insisting fact-checkers be present at all the debates to keep Trump honest. Joe should start with his own speeches which are filled with lies, half-truths, rumors, and, famously, huge flip-flops.

In Pittsburg the other day, Biden insisted, “I am not banning fracking.” Really? The Green New Deal that Joe, Bernie and AOC have signed on to OPPOSES FRACKING. Kamala Harris is violently opposed to fracking EVERYWHERE, and every time. Most important, in July of this year, Joe answered a question about fracking on CNN saying, “We would make sure it’s eliminated.”

What Joe said in Pittsburg is worse than his usual flip flop; it’s a straight-up liethat could hurt the lives and livelihoods of hundreds of thousands of families and millions of people. But Joe doesn’t care about those folks, he cares only about winning the election, so he’ll say whatever he has to hoodwink them out of their votes. Then, if they lose their jobs after he wins the election, and reverses position, well, that’s the brakes. Winning is all that matters, why else would he run for the job four times?

Joe should be especially ashamed for his false accusation that Donald Trump would change Social Security for seniors. It’s not just a dirty trick. It’s a lie intended to instill fear among a group of Americans who are especially vulnerable.

It’s not a new lie though. For decades Democrat candidates have made exactly the same false attack against their Republican opponents. Obama did it first against McCain, and then against Romney. Gore did it against Bush, so did John Kerry. Clinton did it, Jimmy Carter did it, even Hubert Humphrey did it.

So it’s not surprising Joe would do it. Except that Donald Trump from day one has resisted even the mention of touching social security. He’s made it clear he’ll oppose all reform of the system no matter which party brings it.

Crazily enough, Joe is now trying to blame Donald Trump for the riots and looting. He apparently hasn’t been paying attention. All the violence is happening in cities run by Democrats. Trump has repeatedly offered to provide federal law enforcement officers to supplement local police. And repeatedly, Democrat Governors, Mayors, and local officials have refused almost every offer made by Trump.

Instead of accepting Trump’s offer of help, they’ve moved to defund or re-direct money for law enforcement. Local Democrat district attorneys have refused to prosecute rioters, looters, and thugs. In fact, Democrats have sent a clear message to those who would burn down our cities and assault our people: the coast is clear, feel free to rampage all you want. There will be no repercussions.

Just look at what Joe said about the thugs who harassed those who attended the last night of the Republican Convention. Joe said NOTHING. No condemnation at all.

Joe says he wants to unite this country, reach across the aisle to solve problems. Obama said the same thing, then spent 8 years villainizing Republicans at every opportunity. Joe, likewise, has not taken one action or said one word that would actually bring people together.

Nancy Pelosi recently said Trump and his supporters are “Enemies of the State.” Joe said nothing. Maxine Waters called for Democrats to get in the face of Trump supporters and harass them at every opportunity. Joe, are you there? Black Lives Matter says they’ll burn down the cities until their demands are met. From Joe, only crickets.

Recently, BLM and ANTIFA activists have taken to forcing people in outdoor restaurants to raise their hand in a Marxist clenched fist. Those who refuse are shouted down and harassed. Hello Joe, anything?

Even the President of The United States of America cares enough about the rights of American citizens to condemn the violence happening in Democratic run cities, and offers repeatedly to help. Joe, on the other hand, won’t stand up against injustice because he’s scared to death he might say something that causes his left-wing base to desert him. Instead of trying to do anything to unite the country, Joe sits in the basement sucking his thumb.

It’s one thing, Joe, to let your handlers, and the leftist leaders of your party, walk all over you while you’re a candidate. But as the leader of the free world, that kind of weakness will cost America the world’s respect and might well cost freedom loving people in America, and other countries, their lives.

The Politics of Blame: Two Americas