The end of what law enforcement had called the most imminent Islamic terrorist plot since September 11 came when Gregory Vernon Patterson left his cell phone behind at a gas station.

Patterson and his roommate, Levar Haley Washington, had joined Jamiyyat Ul-Islam Is-Saheeh, a prison Islamic terror group, and had been conducting a robbery spree to finance terror plots against the LAX airport, the National Guard, and local synagogues during the High Holy days.

The shotgun robberies by the organization, whose name meant the Association of True Islam, were going well. The gang of criminal Jihadis had pulled off eleven gas station robberies in LA and Orange County to raise funds for their terror spree until Patterson dropped his phone during a robbery at a gas station in Torrance. The phone led authorities to the South Central apartment being used by Patterson and Washington where they found Bin Laden posters and a target list.

The target list included LAX which was convenient because Patterson already worked there.

Washington and Patterson were busted while trying to rob another gas station in Fullerton.

Patterson told cops that robbing gas stations was “part of a jihad against the U.S., particularly against American oil companies who are stealing from our countries” and that he wanted to die for Allah. The gas station robberies had been meant to raise money to buy weapons and to provide training to Patterson, who had no criminal record, in how to be a terrorist. 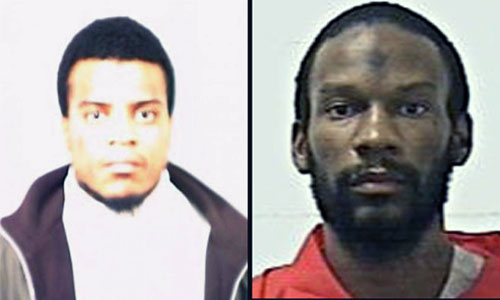 Patterson and Hammad Riaz Samana, a Pakistani, had all attended the Jamaat-E-Masijudal mosque where Washington had recruited the black convert and the Pakistani Muslim. The two terrorists swore allegiance to Washington and the shotgun robberies of gas stations began.

Washington, a former Crip, had done time in Folsom State Prison where he found a copy of the Koran, began calling himself Abdur Rahman, and was recruited by a terror mastermind.

There were two unique things about the 2005 terror plot. As Daniel Pipes pointed out at the time, it was the first “large-scale” terror plot organized by Americans, not Muslim immigrants.

But it was also the first Islamic terror plot in America that was organized from prison.

Kevin Lamarr James, a Crips gang member, had been sent away for a decade for a robbery in 1996. A member of the Nation of Islam, James made the same journey as Malcolm X and many other black Muslims, away from the racist black nationalist UFO cult, and to mainstream Islam.

On one hand, he had gotten a tattoo of Allah and on the other, the star and crescent of Islam.

The charismaic James created Jamiyyat Ul-Islam Is-Saheeh or JIS to spread true Islam, recruit prisoners, and set off a wave of Islamic terrorist atrocities against American targets in California.

Members were told to swear an oath of secrecy, to wage war on infidels, especially Jews. In prison, they practiced Arabic, studied Islamic theology, and trained in martial arts. Out of prison, they were told to blend into society and build the Caliphate in America through Jihad.

By the time the robberies began, a Jihadist group had been secretly operating in Folsom Prison for nearly a decade, and was about to make the leap to carrying out attacks on the outside.

One of their target dates for a terror attack was the fourth anniversary of September 11.

“This incident is the first in a series of incidents to come in a plight to defend and propagate traditional Islam in its purity,” James, who had changed his name to Ahmed Binyamin Alasiri, allegedly declared in a press release for the attacks.

“We are not extremists, radicals, or terrorists. We are only servants of Allah.”

But James hadn’t picked the best servants for his deity. When Patterson left behind his phone, the authorities followed the trail right back to Folsom Prison and JIS’ mastermind.

The four-man cell was charged with levying war against the United States.

But James was the one with the brains. While Washington, his patsy, was slapped with a twenty-two year prison sentence, his ‘Sheikh’ who had built an entire terror group in prison, denied everything and then claimed that he suffered from a really bad childhood.

“Your honor, I’m thoroughly embarrassed and appalled by my actions. I don’t even recognize who I was three years ago. Never before in my life before meeting these people, did I believe in violence or targeting innocent civilians,” the terror sheikh gushed.

Judge Cormac Carney, who would later illegally declare the death penalty to be unconstitutional, called James’ missive “the most powerful letter I’ve ever received.”

The naive judge was also impressed by all of James’ prison college classes and his evolution and repentance, and described him as a victim from a disadvantaged background.

In the portion of James’ letter that Judge Carney read out loud in court, the terror mastermind vowed that, “My country need never fear from me again.”

James, now living in Orange County and officially being called Ahmed Binyamin Alasiri, had been selling nearly pure methamphetamine for thousands of dollars.

And all of this was going on while James was on supervised release.

The FBI had called the terror plot by Jamiyyat Ul-Islam Is-Saheeh, “probably the one that operationally was closest to actually occurring”.

“Americans watched so-called ‘home grown’ terrorists unleash multiple bombings in the city of London. Some in this country may have mistakenly believed that it could not happen here. Today we have chilling evidence that it is possible,” Attorney General Alberto Gonzalez said.

The terror plot had been aimed at military targets, as well as a number of Los Angeles congregations, including, allegedly, the ultra-progressive B’nai David-Judea, which would have been struck by armed gunmen pushing their way inside and opening fire on Yom Kippur.

The heavy security presence at Los Angeles synagogues, which includes heavily armed guards and bulletproof vests, is part of the legacy that James and his True Islam terror group left there.

James had built up a terrorist operation in prison backed by manifestos and operational documents making him the closest counterpart to the Blind Sheikh. Instead he was given a lighter sentence because the same charismatic gang member turned preacher, who had convinced hardened criminals from rival gangs to believe in him, had turned a judge.

Selling meth may have been the alleged hobby of a newly freed criminal, or something more. Traffic in certain drugs, including methamphetamines, has been used by Islamic terrorist groups to finance their operations. It’s unknown whether this is the case here, but the FBI, after Obama, is less likely to be looking for it or to even know what to be on the lookout for.

When Jamiyyat Ul-Islam Is-Saheeh fell afoul of the FBI in 2005, law enforcement was acquainted with the methodology, infrastructure and strategies of Islamic terrorists. During the Obama administration, a cultural revolution was waged against counterterrorism from the inside.

If James is up to anything these days, the FBI is unprepared and unready to find out.

Fifteen years later, the terror plot, once a major event, has been largely forgotten. And the same is true of most Islamic terrorist attacks except for September 11. As the country enters another September and begins a countdown to 9/11, everything afterward is being forgotten.

During the Black Lives Matter riots, a white Muslim illegal alien stabbed a New York cop, grabbed his gun, and opened fire on other officers while shouting, “Allahu Akbar”. Despite wounding three cops and claiming, “my religion made me do it,” there’s been little coverage.

In the midst of a pandemic and nationwide race riots, we should not forget that there is more than one threat vector. Islamic terrorists don’t go away just because no one is paying attention. And the same prison system that helped produce the wave of BLM violence has also incubated Islamic prison terror cells like the one that plotted to kill Americans on another September 11.

The Nation of Islam has been a feeder for both Islamic terrorism and Black Lives Matter violence. All three are deeply violent, bigoted, and possessed of a feverish hatred of America.