“To doubt them is dangerous of that I’ll agree,
everyone sees them, so how come not me?”
Doggerel by unknown author in 1950’s. 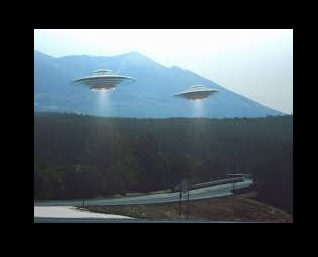 Some folks have speculated that 2020 has been so crazy that we should not be surprised if we next will be visited by aliens from outer space. As the saying goes, you should be careful what you wish for.

It was in the late forties that I can recall hearing about Unidentified Flying Objects (UFOs) and they became the stuff of TV dramas and films. As a science fiction reader I was very familiar with stories about aliens and space ships and this seemed pretty exciting to me.

I remember especially earlier films like The Thing From Another World, The Day The Earth Stood Still, War of the Worlds and there seemed to be a good vs. evil thing in each. Either other world aliens wanted to rule us or they wanted to help us. Themes that continue through science fiction films today. News stories about UFOs being spotted had all of us watching the skies as we were warned in the films.

Of course stories of alien visitations go back well before the past century. Such stories were in the mythologies of many cultures with the most interesting being the Mayan. Many of the Mayans believed they originally were beings from outer space thousands of years ago. In a museum in Belize with Mayan artifacts there is a sketch of what could pass today for space vehicle with rockets blazing. Over fifty years ago Erich Von Doniken’s detailed book  Chariots of The Gods was a best seller. In it he traced the possible evidence of alien visitation in all parts of the world. Though criticized by many experts Von Doniken’s fame allowed him to write thirty sequels.

The most famous in this nation is the reputed crash of an alien space ship in Nevada in a heavily classified area now known as Area 51. Every now and then there is big news in regard to people trying to break into the area because of a story that the government is hiding the bodies of aliens. In recent years there have been what sounds like credible sightings by the air force and Tucker Carlson on Fox News seems to be a major believer that we need to know if we are having alien visitations.

This comes down to a major question for Christians. Life on other worlds would appear to be something not supported in the Bible and some Christians feel that it is anti their faith to believe so. After all, Earth is God’s only created planet. Right? This opens us up for a good debate.

In Job 1:6 we are told that the sons of God gather together and some scholars take it to mean there were other Adams on other worlds. Of course the Bible deals chiefly with our world alone and the salvation of mankind. This does not limit God one way or the other and it is likely a mute question. There are many Christians who believe that there is life on other worlds and at the very least we know there are angels.

One of the greatest theologians of the last century, C. S. Lewis, used his musings about life elsewhere for a brilliant trilogy that some might class as science fiction. His Out Of The Silent Planet, Perelandra and That Hideous Strength are a series that heavily deal with good and evil and salvation. The first two center on Mars and Venus and the third on the evil that men can do with science.

A new book now on the market makes a definitive study of the UFO phenomena from a Christian perspective, Alien Encounters by Chuck Mizzzler and Mark Eastman. The authors present a thorough study of reports over the years and evidence that likely has been covered up by different governments. The big question is whether these sighings are angelic or demonic, not whether they exist or not.

The Bible does elude to other beings as for example in Genesis the Nephilim and the statement that there were “giants” on the Earth. Was Goliath, who David challenged and defeated, an alien of sorts?  In Revelation John refers to creatures that definitely are not humanoid. When it comes to angels we are often influenced by the artist depictions from the Middle Ages and Renaissance. We tend to think of all angels having wings while in the Old Testament there are stories that depict some angels as being very humanoid in looks. Dr. Billy Graham wrote often about the appearance of angels and revealed that the word ‘angel’ was Greek for Messenger.

In Hebrews 13:2 we are advised, “Don’t forget to show hospitality to strangers, for some who have done this have entertained angels without realizing it!”  The question might be asked why would flying saucers be needed by angels? As Captain Kirk observed in the film Star Trek V The New Frontier, “What does God need with a Starship?”

This may or may not make a case that UFOs are demonic. If there are other civilizations out there in a Heaven consisting of countless galaxies with planets, then it is likely that we are the only fallen planet. Could UFOs be piloted by God’s created beings just observing us, especially at this time. If we are at the end times, then there may be benevolent beings acting for God to oversee whether we are going to seek salvation or let ourselves be damned.

This is speculation of course, however 2020 has been a year like none other in modern recorded history. We have a Pandemic that has put many of us in lockdown and has closed many businesses and lost jobs, plus we have radical anarchists burning our cities and defying law and order. It has been a year of record breaking floods, fires and other disasters. Above all it is a year of decision.

The Democratic Party would seem aligned with demonic forces.  There is support in that party for the death of the unborn and even those freshly born. Abortion. Clearly a violation of what is in the Bible. There is support for transgenderism, and other life styles also contrary to the Bible. The Bible also calls for the enforcement of just laws. The Bible does not advocate murder, arson and vandalism. These are things the leaders of the Democratic Party, not the moderate ones who feel their party of old no longer exists, seem to accept as the new normal. Some Democrat leaders even promote anti Biblical beliefs.

Standing against this is the Republican Party and the great majority of Christians in our nation. Sadly many Christians do not vote, an estimated forty million in the last presidential and congressional elections stayed home. This calls to mind the famous quotation by Edmund Burke  “The only thing necessary for the triumph of evil is for good men to do nothing.”
If we are being observed by aliens are they God related or Demons? We talk about elections in nations being interfered with by other nations. While we are speculating here, could elections be interfered with by demonic forces? If so, this clearly is the start of the end times and we all need to be aware and active. Especially if we are Christians.
Share
Facebook Twitter Pinterest Reddit Share via Email Print

City on the Edge of Forever: Star Trek's Time Paradox