A hardcover copy of “In Defense of Looting” will run you 21 bucks at Amazon and 28 bucks at Barnes and Noble. That’s just how capitalism works for the distribution and sales of a product from one of the biggest publishing companies in the world that’s part of the Lagardère empire.

Why is the largest publishing company in France pushing what Publishers Weekly called, “a provocative, Marxist-informed defense of looting” to Americans? Because it makes money.

Learn why private property is just a social construct for only 21 bucks.

“In Defense of Looting” quickly ended up a major topic of conversation on social media.

And that means Arnaud Lagardère, the head of the French empire that swallowed Little, Brown and Company, adds to his $220 million net worth and keeps the model he married, half his age, in the style she expects at his country estate. So what if a whole bunch of small businesses, many owned by immigrants and black people, get trashed and put out of business. 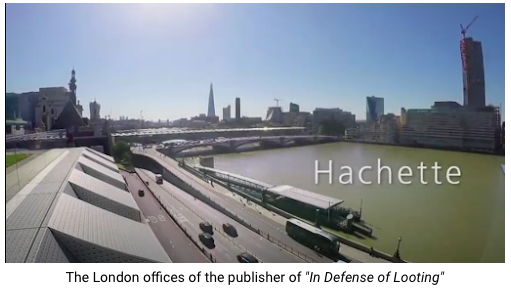 “In Defense of Looting” was published by Bold Type Books, a Lagardère subsidiary imprint in partnership with what used to be Nation Books. The Nation, a hard lefty magazine, is partly owned by Katrina vanden Heuvel, the daughter of an MCA heiress who was worth over $38 million when she jumped out of her apartment window.

Two years later he was being profiled in the New York Times attending an Upper East Side party. Such are the hobbies of the worthless dilettante brats of the New Left.

The son of a professor and a producer from a wealthy suburb of Boston, Willie, his original name joined the Park Slope Food Coop, and scribbled terrible movie reviews, “capitalism is built on the bones of the witch, her magic the first threat against capitalist rationalization”, followed by equally terrible leftist screeds for The Paris Review, Jacobin and The Nation. In 2011, he was in Barcelona, taking part in protests there as training for his work on Occupy Wall Street.

Fast forward to the present, Willie had married Sophie Lewis, a British lesbian feminist who has two degrees from Oxford, had translated “Communism for Kids”, and had her own book “Full Surrogacy Now: Feminism Against Family”, which attacked the existence of the family. Willie, her new “wusband”, now appeared to be Vicky Osterweil.

The happy young white couple both had major books with radical Marxist premises.

Sophia was calling for the elimination of the family and Vicky was defending looting. And the upscale couple was doing it in the name of destroying capitalism.

“Want to Dismantle Capitalism? Abolish the Family,” The Nation headlined a review of her book.

All of this made marriage a little awkward, but there was nothing that couldn’t be overcome.

A splashy Vice profile mentions that at their wedding, instead of vows, the happy couple gave speeches disavowing the institution of marriage and the biological family.

And then they headed to Boston where Willie’s mother wanted a more traditional wedding.

You can disavow the institution of marriage, but you’re still going to get married. And you can write a book attacking the existence of the biological family, but when your ‘wusband’s mommy wants a traditional wedding she can invite her friends to, you drop the nonsense and go.

It’s unknown what Sophia’s parents, journalists who had given birth to her in Vienna and raised her in Switzerland and France, places that speak to her oppressed background, thought.

Sophia might be gay and Vicky might be transgender but they were a conventional enough couple living the hipster dream in a gentrified area of West Philly, and touting a gift certificate to an antique shop that they had received as a wedding present. The sort of thing you do when you’re trying to smash capitalism, and abolish the family along with private property.

Right after you get married and pick up something nice at the antique shop.

The Black Lives Matter riots and the looting trashed parts of West Philly, but it doesn’t seem to have done much to disturb their idyllic world of community gardens, social justice yoga studios and punk hair salons. And even if it did, unlike their proprietors, Vicky and Sophia can move on.

The ugly truth about Marxist capitalism-smashing hipsters is that they are the least exposed to the consequences of their theories. When a third of Philly pharmacies were robbed in a coordinated campaign by gangs coming in from outside the city, it had a major impact on black senior citizens getting their prescriptions, but not on an upscale white hipster power couple.

Spending your twenties and thirties deconstructing everything is the luxury of the upper class. It’s the hobby of people who don’t really have jobs or a family depending on them for support. That’s why the deconstruction is fundamentally unserious. After writing a book calling for the abolition of the family, Vicky and Sophia got married. Vicky’s living in West Philly where the riots and the looting are going on, shopping for antiques, and writing a book in defense of looting.

As F. Scott Fitzgerald wrote in The Great Gatsby, “They were careless people, Tom and Daisy—they smashed up things and creatures and then retreated back into their money or their vast carelessness.”

A generation of upscale leftists is smashing up everything while knowing that they can retreat to the pricey suburbs that spawned them, to their country estates and condos, while the chaos and destruction happen to someone else. Tom might be calling himself Thomasina and Daisy might be calling herself a lesbian, but they’re still playing games and amusing themselves at other people’s expense in the vast carelessness of theoretical reasons for destroying it all.

Willie/Vicky originally wrote an article titled “In Defense of Looting” in 2014 during the Ferguson riots filled with 1619 Project style nonsense like “American police forces evolved out of fugitive slave patrols”, while insisting that, “the idea of private property is just that: an idea.”

Of course every idea is an idea. Including the sacrosanct nature of human life and liberty.

Dismissing fundamental concepts on which your existence depends as mere ideas is a privilege. Violence, disorder, and chaos can take away that privilege and show their value.

Leftists deconstruct everything until they realize how badly they need those ideas. But it takes far longer for them to be affected by the destruction than the poorer and more vulnerable people whose lives have been turned upside down for a sensational new talking point at one of Katrina vanden Heuvel’s fashionable parties.

While countless small businesses have been destroyed, Amazon’s business model is booming.

The massive corporation, where many lefties will be shopping for copies of “In Defense of Looting” doubled its quarterly profits. Amazon controls 38% of the e-commerce market and when Black Lives Matter looters burn their way through neighborhoods, more retail moves away and goes online. Small business owners decide that it’s better to be a third party seller for a massive corporation than to try and keep going during the lockdowns and race riots.

Amazon can make money from “In Defense of Looting” and from the actual looting.

The small businesses that Vicky Osterweil ridicules provide their owners with some measure of independence. The looters turn them into subjects of the same sort of massive corporate monopoly that Osterweil claims to hate, yet ultimately champions and makes his money from.

Osterweil preaches in defense of looting in the name of the black community. But the death of small businesses hits black communities hardest. Shopping online is a lot easier if you have a credit card or a checking account. Portions of the black community have neither. Wiping out street retail in urban areas not only guts neighborhoods, it turns retail into wealth privilege.

Upscale areas will still have street level retail once the Black Lives Matter riots die down. But the poorer black areas hardest hit by them won’t. The white leftists promoting looting will still have their quaint cafes, punk hair salons and social justice yoga studios that Vicky and Sophie rave about, they’ll also have local supermarkets like Whole Foods, owned by Amazon, groceries, restaurants, boutiques, coffee shops, and the rest of the hipster detritus of gentrification.

That’s because they have the money and spend the money to make street retail profitable.

When the rioting is done, there will be burned out neighborhoods ripe for real estate speculators to move in, renovate, and peddle to the wealthy white hipsters who want to live there.

Promote enough looting and you too can cash in when the market is right.

There is more than one kind of looting. There are the organized gangs smashing up Philly pharmacies and heading away in vans and trucks. There’s the Soros DA who lets crime happen. And there are the professional white activists who keep shouting Black Lives Matter while promoting the destruction of black neighborhoods to sell their books on Amazon.

The street looting is paralleled by an even more massive looting at the top with hipster Marxist deconstructionists as ideological foot soldiers in the trashing of America. Some of the biggest social justice corporations in the country are funding the attacks on capitalism and the country.

Meanwhile in August, Soros Fund Management raised its stake in Amazon by 102%.