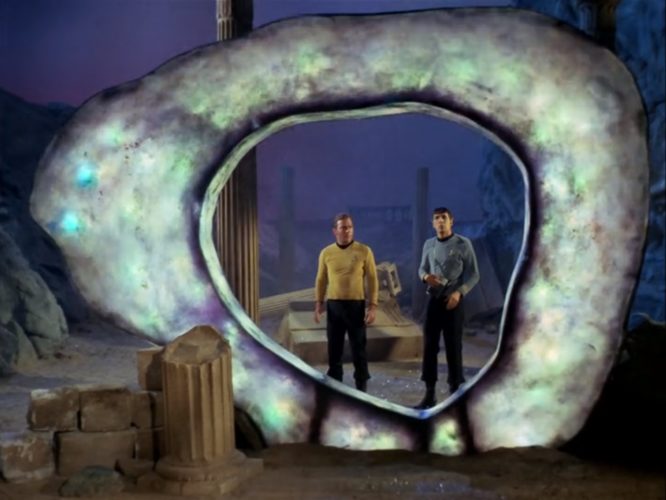 In all the different forms Star Trek has taken over the decades, the one episode that ranks near the top of the list is “City on the Edge of Forever”.

However, in recently watching the episode for what has to be the thousandth time, I let my mind wander to the storyline in general and have several things to discuss regarding the logic of several points in the story (especially the “time” question). Remember, this is all in fun so I hope Trekkers won’t haul me off to the brig at phaser point.

There are a couple issues before we even get to the time element:

Basically, security on the U.S.S. Enterprise sucks. Anytime someone wants to take over the ship they are pretty much able to do so – Khan, Nomad, Lieutenant Riley. It really doesn’t matter who. In this episode, McCoy is able to do the reverse: escape the ship by fleeing the bridge and then karate chopping poor Lieutenant Kyle and transporting himself down to the planet. Since the route from the bridge to the transporter is no doubt known to security, how did McCoy go unnoticed? I think a man yelling “KILLERS…ASSASSINS…MURDERERS” would attract attention! It gets even worse. When Kirk and the landing party beam down to search for him, McCoy hides behind a small rock and then a very small wall while everyone passes by looking the OTHER WAY. You would think someone would have looked in the opposite direction. Spock finally gets the neck pinch on “Bones” but then everyone is looking at the Guardian when McCoy wakes up and runs through the portal. Again, very shoddy security.

And what about the Guardian of Forever? He/It doesn’t do too well with the “guard” part. He just lets McCoy go on through without asking for any ID whatsoever! You would think that with the potential to alter history, the Guardian would at least have some type of force field. To be fair though, Mr. Guardian may have been surprised by the arrival of the landing party and the questions they asked. No doubt that’s why he said “Since before your sun burned hot in space, and before your race was born, I have awaited a question”. I believe I would have asked the GOF where Dr. McCoy was hiding. Just a suggestion that could have saved a lot of time (pun intended).

First, Kirk asks Spock if they could somehow take McCoy back a day in time (using the Guardian) in order to avoid the hydro accident that drove McCoy crazy. OK. How exactly is that to be done? If they go back a day, then there would be 2 versions of Kirk, Spock and McCoy on the Enterprise. As Spock might say, that would be “fascinating”. I can just see the future McCoy telling his past self not to be putting away the hypo while they are coming up on a ripple of time that will cause him to pump himself full of cordrazine. I imagine the “past” McCoy to say something like “I’m a doctor not a time traveler”.

Second, when McCoy goes back in time and changes history, the Enterprise disappears.

Guardian: “Your vessel, your beginning, all that you knew is gone”.

Boy that Guardian is such a ray of sunshine.

Kirk: “McCoy has somehow changed history. Earth’s not there. At least not the earth we know. We’re totally alone”.

So why is the landing party still there? Shouldn’t they be somewheres else in this alternate reality that McCoy has created? It boggles the mind. Perhaps the Guardian shielded them from the effects. After all, if they’re gone then the Guardian may be waiting ANOTHER million years before getting a question. Even a machine/being can get lonely you know.

And while we’re talking about the Guardian, just how did he have details of earth’s history to display and why does it look like scenes from Paramount movies? It’s just lucky Kirk didn’t talk it into mechanical suicide like he did with the M5, Nomad and Landrau.

Then there’s a major flaw in the logic of the storyline as it relates to social worker Edith Keeler and the timeline of the 1930’s. After getting the tri-corder working using early 20th century technology (happens everyday!), Spock discovers that McCoy saves her from dying in a car accident as she was meant to in 1930. Six years later she has become very important and meets with FDR. She has such a great influence on him that the United States delays it’s entry into WW2 which allows Germany to develop the A-Bomb first and win the war. Does anyone see any thing wrong with this? What tiny little piece is missing? If you said “Pearl Harbor” you’d be correct. There are only 2 possibilities here: Either Pearl Harbor still happens and we STILL don’t get into the war, or somehow in this alternate reality the attack by Japan never happens. I think both unlikely. Actually there may be a third option. Perhaps the U.S.S. Nimitz out-ran the time portal in “The Final Countdown” and really did intercept the Japanese Fleet on the way to Pearl!

Spock also makes the comment that Edith Keller’s pacifism was noble and correct: “She was right – peace was the way. But at the wrong time”. Well, gee Mr. Spock, how are we supposed to know when peace is right and when it is wrong? Wouldn’t HISTORY tell us that? That was a totally illogical statement by the Vulcan.

Having said all of the above, I still consider this the best episode of the original series. This was one of William Shatner’s finest career performances. Kirk and Spock are completely out of their “comfort zone” in the past so it allows the actors to expand the characters. There are several humorous moments between the two (Kirk saying to Spock “Sometimes I expect too much of you” is great as well as explaining Spock’s ears as an accident with a mechanical rice picker). Kirk’s veneer is stripped away by Edith Keeler. He is vulnerable, torn between what he knows he must do to restore the timeline yet emotionally and romantically attached to the person who must perish to accomplish this. I think we can all relate to what a struggle that would be. Shatner plays it perfectly.

Kirk: “Spock, I believe I’m in love with Edith Keeler”. 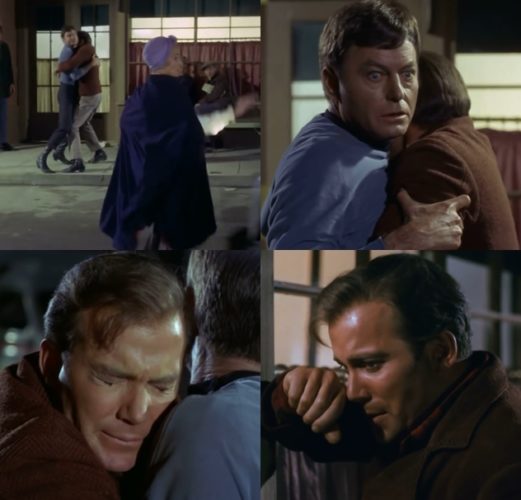 The look on Kirk’s face and the dialog as he stops McCoy from saving her is heart-wrenching.

“McCoy: “You deliberately stopped me Jim. I could have saved her! Do you know what you just did?”

Spock: “He knows Doctor. He knows”.

And after they are successful and return to the planet, Kirk simply says “Let’s get the hell out of here”. Probably the most dramatic 2 minutes in Star Trek history.

Lastly, when you write a time travel episode, you have to take liberties since no human has actually traveled through time. At least not that we know of. Although I guess if someone HAD changed the timeline in the past we probably wouldn’t know it since we don’t have the Guardian hanging around to shield us.

And by the way, to clean up the whole timeline thing, I think it’s logical to assume that Kirk, Spock and McCoy were ALWAYS supposed to be at that moment in time to play out the scenario that poor Edith Keeler must sacrifice her life to maintain the timeline. Now THAT is a mind blower. Oops, FASCINATING.