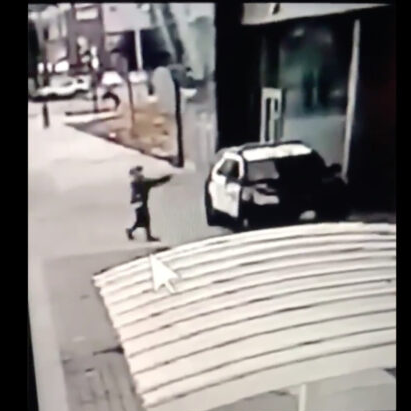 Over the weekend, a couple of police officers in Compton, CA were ambushed as they sat in their car. A shooter walked up to the window and fired a large number of shots striking both officers repeatedly in the head. One was a 31 year old woman with a 6 year old son. The other officer was a 24 year old man. They’d been Sheriff’s deputies for less than year and a half.

BLM activists blocked emergency entrances to the hospital where the stricken officers were taken and chanted, “We Hope They Die.” It was obscene. And it paints a striking picture of how sick our society has become – and I’m not talking about Covid 19, I’m talking about the despicable, far-left, state of our institutions: especially our education system, our media, our judiciary, and our politics.

I imagine this crap will continue through the end of the year. I will also tell you that whoever is president needs to put an end to the lawlessness sweeping our cities.

We can thank BLACK LIVES MATTER and ANTIFA for the majority of the destruction, the killings, and the looting. They’re the combatants, but they’re not alone. The real problem are those politicians who encourage the destruction by mouthing cowardly platitudes about violence while doing nothing to stop it. They’ve told law enforcement they can’t arrest, prosecute, and incarcerate. Even worse, many have gone after law abiding citizens who were trying to protect themselves, or the police who are trying to enforce the law.

BLM, after all, is the same organization now celebrating the murderous ambush of 2 Los Angeles deputies who’s sole crime was doing their jobs.

So to the NFL, NBA, MLB, and all those big corporations who are bending over backwards to buy into the moronic ideas and corrosive hatred of the far left Black Lives Matter so they can signal their politically correct virtue, I say, “well done.” By doing so, you have alienated millions of Americans who know ALL LIVES MATTER. You have contributed to a culture in which innocent police doing nothing more than protecting and serving can be gunned down. And you have thrown your lot in with an organization that is expressly and brazenly Marxist and anti-American.

If you doubt that, consider that Patrisse Cullors, the co-founder of BLM, proudly claimed of herself and the other founders of BLM, “We are trained Marxists. We are super-versed on, sort of, ideological theories.”

Cullors went on to say that her “first political home,” was the “Community Strategy Center,” which describes it’s mission as focusing “on Black and Latino communities with deep historical ties to the long history of anti-colonial, anti-imperialist, pro-communist resistance to the US empire.”

Need more? Here are excerpts from the BLM web site.

There is “rampant and deliberate violence inflicted on us by the state”. In other words, they believe that our government is out to get black people. They totally ignore the $1 trillion plus that has been spent mostly in minority communities to alleviate poverty; they ignore the phony promises made by Democrats; they disregard all of the dumb laws passed by Democrats that hurt job creation in poor neighborhoods. Most important, they keep supporting Democrats despite all that; and despite the fact Republicans are working to improve schools and give families school choice, provide greater incentives for businesses to bring their jobs to inner cities, and support fairer, firmer, and better criminal justice.

Their web site goes on to say: “We work vigorously for freedom and justice for Black people and, by extension, all people.”

It’s a lie. If they really cared about freedom and justice for black Americans they would work to stop union control of our education system and side with Republicans to support school choice for families trapped in failing school districts. They’d understand the unholy alliance between teacher unions and the Democratic Party, and insist it end. But they don’t because they don’t really care about raising blacks up as much as pulling the rest of society down.

Their web site goes on, “We embody and practice justice, liberation, and peace in our engagements with one another.” Another blatant lie! If Black Lives Matter really cared about justice, liberation and peace for all blacks; they would care equally about the 7,000 blacks killed last year by mostly other blacks. Instead, they make clear they care only about blacks killed by white cops.

The BLM web site also says, “We know that police don’t keep us safe — and as long as we continue to pump money into our corrupt criminal justice system at the expense of housing, health, and education investments — we will never be truly safe.” BLM makes clear they want fewer or no police, no courts, no prisons, and no punishment. What they want is more tax dollars for themselves and their pet projects.

The site continues, “Black Lives Matter’s mission is to draw attention to the over-policing that occurs in our communities and the consequences Black people face when we take a stance against the system.”

But every poll out there shows that blacks forced into inner city neighborhoods overwhelmingly prefer more police, and more aggressive policing. Most people want to walk their streets safely.

It’s ironic to me that major league sports, corporate America, and elected Democrats spend so much time and money pandering to an organization that literally wants to destroy them.

They’ve bought into the lie that if they pay off these radicals, they’ll eventually “come around” and leave them alone. That’s what Joe Biden seems to suggest when he says, if you just vote for him, all the rioting, looting, and destruction will stop.

But that’s the definition of terrorism – people and groups who use terror to achieve political goals.

What Biden and the corporations haven’t learned is that when you negotiate with terrorists, they always come back for more. The terror only stops till they run out of the last pay-off you made. Then they come back.  And they never stop. They always want more.

Joe Biden is using the looting and rioting as the reason to elect him. BLM is using it as a means to defeat Trump. If you don’t want the terrorists to win, that leaves only one option. Vote to re-elect President Trump.