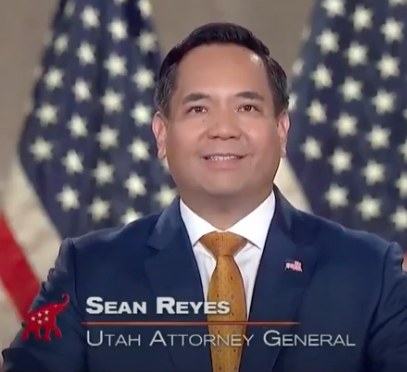 With less than 48 hours’ notice, Utah Attorney General Sean Reyes was asked to deliver a speech of a lifetime at the 2020 Republican National Convention, and on the last night too. With that daunting charge, Reyes chose to pay homage to his recently deceased father who escaped the Marcos regime to start a new life and raise a family in America while reminding Americans that the American Dream is very much still alive.

In his speech, Reyes examined Trump administration policy decisions over the past four years and shined a light on the facts (not misinformation as many media supporting Biden/Harris would lead you to believe), which clearly demonstrate a White House that has been a source for good, law and order (i.e., safety and security), and posterity for all Americans, despite the recent pandemic setback.

With little time to prep or sleep, Reyes traveled to Washington D.C. to prerecord his speech that not only provided insight about his personal relationship with his father, but eloquently communicated his passion for supporting what is morally and ethically right regardless of today’s left-wing haters. In less than 48 hours, he had a speech that our team poured over to ensure each word was authentic, factual, and inspirational. Given the overwhelming feedback from family, friends, and supporters from all over the country (and world) over the past few weeks, I would say Reyes hit a homerun.

Always a class act, humble and passionate about solving today’s critical challenges, Reyes cut to the chase during his remarks and called out mainstream media, lawless liberals, ever-pious RINO Never Trumpers, and Democrat elected officials who have been mismanaging too many of our great cities like Portland, Chicago, Seattle and Minneapolis-St. Paul for decades. Ironically and insidiously, Nancy Pelosi’s House still refuses to find a compromise and pass legislation to help millions of Americans financially recover from the pandemic, yet have no problem earmarking massive dollars for cities that have run their governments into the ground.

If more Americans took an honest and hard look at the facts and actions of the current administration, and educated themselves on what has actually been achieved over the last four years despite constant unsubstantiated berating by the Democrats, the presidential this November would be self-evident: Trump/Pence. We can only hope and pray that a majority of the 148 million who tuned into the RNC 2020 last month watched Reyes’ speech and experienced a major reality check.

A colleague of Reyes, Florida AG Ashley Moody, in frustration with Democrat attorneys general recently stated in The Federalist, “Elected leaders and officials and citizens should be outraged and appalled by the lack of leadership in some of these cities [being burned at the hands of anarchist rioters] across our nation where we are seeing destruction … Without mayors and other executive leaders and prosecutors willing to do their job and enforce our laws, along with police, the system will break down.”

In support of rule of law and against #LawlessLiberals rioting to “Defund the Police” supported by Team Biden/Harris, Reyes reminded those who tuned into the RNC the “America First” policy and actions of hope and prosperity already achieved under the Trump administration.

With more health and economic recovery still to achieve, keeping Trump Victory surrogates and public servants like Utah Attorney General Sean Reyes in office, who still believes in America as the shining light on the hill, has never been more critically important.

So come November 3, as you consider your vote up and down ticket, harken back to RNC 2020 that showcased real American stories, a pro-America Trump team lineup, and the real accomplishments achieved on behalf of allAmericans over the past four years.

Dr. Fred Eichelman: Southern Stereotypes of the Past and Present