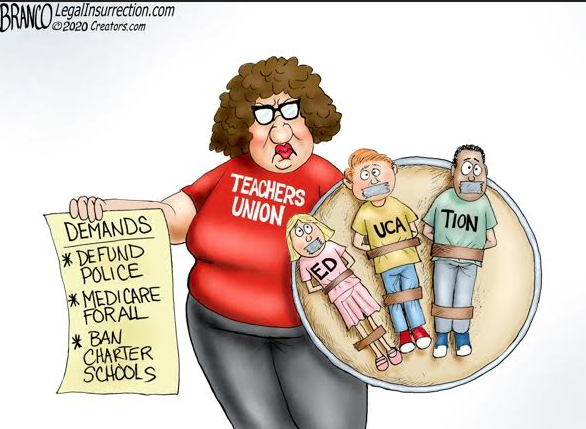 Liberals love to say they’re all about the kids. Based on the results of public schools in America, it’s a safe bet they don’t mean it’s about building a generation of productive Americans ready to carry the torch for freedom and individual rights. Instead, it means brain washing kids to believe America is evil and government planning in every area of life is the solution.

The National Education Association says it’s all about the kids, it’ a lie. For both the NEA and the AFT, “for the kids” really means more union dues and more power for the union. It means more money to pour into Democratic campaigns of of those who could not care less about kids, but care a great deal about re-election.

George Soros knows that in order to get something accomplished you need to start at the bottom. You need foot soldiers to do your dirty work. So he started with school board members; loyal Democrats more interested in launching political careers than creating education quality. He would raise a whole bunch of money for these new school board members, with the very clear understanding they were to vote the way instructed by teacher unions. Teacher unions say no charter schools, so their foot soldiers vote for no charter schools. Teacher unions say no teacher gets fired, so their loyalist school board members give permanent tenure. Got it?

So school district after school district, far left foot soldiers for George Soros and the teacher unions follow directions to the letter. The most loyal, and most talented at campaigning, became state representatives or state senators where they continued the process of catering to teacher unions. Eventually, the really gifted became members of Congress and made damn sure teacher unions were rewarded for helping them get there. In exchange, teacher unions funneled millions of dollars to these politicians, making sure they always prioritized the wishes of teacher union; students – and their parents – be damned.

At this point everyone should be asking, “Why?”

Great question. Have you witnessed the chaos in our streets over the past couple of months?   Destruction,violence, even murder. But beyond that is the utter disfigurement of our history. Protesters tear down statues allegedly belonging to slave owners and slave traders. You know statues of people like George Washington, Abe Lincoln, Christopher Columbus and yes, even Jesus Christ. And why would this happen? Clearly these are not the statues of slave owners or traders. George Washington was our first president, Lincoln freed the slaves, Christopher Columbus was long dead before Europeans came to North America, and Jesus? Could be His message of peace, redemption, and just behavior?

You see the Democrats desperately want to change our history (among other things) to fit their narrative. So through 12-plus years of indoctrination, kids have no knowledge of who did what to whom and when. They have a total misconception of all the goodness that has come from the USA to the rest of the world.

They have no idea of the greatness of America; the sacrifices Americans have made in treasure and blood to save the rest of the world from true evil. They have no idea of the exceptionalism it required to grow from a handful of colonists, in less than two hundred years, to emerge as the greatest nation in history; using our resources, ingenuity, talent and skills to share that wealth with the rest of the world.

Kids are taught that America was founded in slavery; that our institutions and our culture is riddled with enduring racism, that all white people should pay. They learn that police are the force keeping this racist system going. They learn we should all be equal, that being rich is a crime against society. They’re told that what’s mine should be your’s – also known as socialism. They’ve been brainwashed to believe business is bad, capitalism is evil, and it’s heart — Wall Street — is corrupt.

They’re taught to stand up to “the man,” and rebel against authority. That opportunity doesn’t matter, justice can only be achieved when we are all equal in outcome … when there is no mine or your’s and it all becomes our’s. Also known as Marxism.

Teachers and professors preach a kind of heaven on earth attainable only when everyone submits to socialist doctrine as implemented by a huge government bureaucracy.

Bernie Sanders preaches that everything should be available at no cost (except of course, to the unfortunates who create those things.) Schools and colleges reinforce the insanity.  What these numbskull educators never seem to reveal is that socialism has never worked anywhere in the world ever. It can’t. It’s contrary to reason and nature. In the real world, you always eventually run out of other people’s money; or you drive inflation so high money is worthless and people give up trying.

If teacher unions really wanted to help kids, and not just push a progressive, left-wing agenda, they would support charter schools, private schools, and home schooling. They would encourage competition in the education market place so families could choose what’s best for their children. Teacher unions would insist kids who can’t speak English be required to learn before taking valuable teaching time away from American kids. But they don’t do any of those things. A monopoly is what they want because it’s what will produce the most power and money.

If the unions were truly concerned with what’s best for the kids they’d support firing bad teachers. They wouldn’t rewrite history. They’d teach honest economics and civics: two necessities for an educated electorate in a capitalist democracy.

Sadly, that’s not likely to happen. The people who teach our kids aren’t the friends of freedom, capitalism, truth, or democracy. They’re committed socialists and Marxists for whom freedom is the enemy.

They’re not about the kids at all. They’re about gaining money and influence to push their leftist agenda. We see the results of their success most graphically in the destruction, violence, and blood promoted in our colleges and poured out on our streets.

Biden and Kamala: "When Alliances Are Formed in Moral Sewers..."