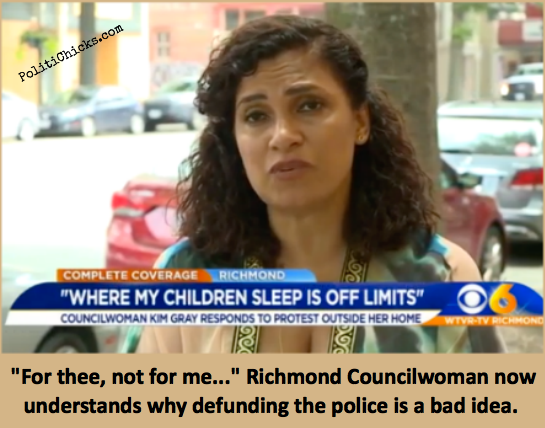 In Richmond, Virginia the city council is debating defunding the police, but apparently not quickly enough.

The peaceful thugs from Black Lives Matter and ANTIFA descended on the home of city council member, Kim Gray.

She’s not okay with protesters attacking her home, violating her privacy, and terrifying her children. Unfortunately, progressives like Ms. Gray don’t necessarily feel the same way about your home, privacy, or children.

Given her progressive ways, it probably is a little surprising the third thing Kim Gray did was criticize the police for not showing up fast enough.

Not that we haven’t warned every moron in the country, this is exactly what you can expect when you batter police for doing their jobs.

Progressive Democrats, who have run our biggest cities for decades are increasingly cutting police budgets, then expressing shock when murders, assaults, rapes, and mayhem increase.

I expect we’ll now see Richmond’s council members hire private security for themselves as three members of the Minneapolis council recently did after the police budget there was defunded. They billed taxpayers for the costs.

Which begs the questions, why should members of the council receive protections the rest of us don’t get? Why should taxes pay for their security, when they’re cutting the amount spent on our security? Finally, isn’t the money taxpayers already pay for police better spent to protect all the community rather than just a few elite socialists on the city council?

The double standards and hypocrisies of progressive Democrats don’t just stop with protesters on their front lawns.

A city council woman in Darlington, South Carolina who regularly parked her SUV illegally in front of City Hall was finally given a ticket. When she saw the officer writing the ticket though, she rushed from the building to berate him for harassing black people.

Maybe you’ve heard of the race baiter head of the Chicago Teachers’ Union basically say Chicago is for blacks and browns, whites should just shut up and pay. She also opposes charter schools and giving parents of any color the right to choose where their children attend school. Her staff have basically said it’s the job of government to redistribute the wealth from those who have it to those who don’t.

I guess if I’m a parent in Chicago, I’d have a hard time believing my child might get a fair shake in the education system no matter what color I was. I don’t think most black parents want their children to hate white people. But that seems to be what the socialist leadership of the Chicago Teachers Union wants.

Progressives Democrats, and their many allies, are always calling whites, conservatives, and Republicans racists. Susan Rice, one of the women currently under consideration as Joe Biden’s VP, recently said most all of Trump’s supporters are white supremacists.  Ms. Rice is the Obama official who told America a few years ago that the attack against our Benghazi consulate that killed our U.S. Ambassador to Libya and several others was the result of an anti-Islamic video. She knew it was a lie when she said it, but she said it anyway to give cover to an inept and cowardly Obama Administration, and Secretary of State Hillary Clinton, who refused to protect American lives.

Lisa Herbold, a Seattle City council woman who is 100% in favor of defunding Seattle’s police department, suggests a way to make defunding more tolerable. Her plan: lay off all the white cops first regardless of experience, rank, skill, or talent. If you’re white, you’re out of here. Clear and simple racism.

Any wild guesses why all this is happening? To me, it seems clearly the result of progressive Democrats at the local and state level who are aiding and abetting the terror and destruction by referring to it all as “peaceful” protests. Or who think they can buy off the BLM and ANTIFA thugs by caving into their demands and expecting taxpayers to cave in order to obtain some kind of peace.

The progressives have sent the rioters a message that you can get what you want if you just keep burning down our homes, businesses, and cities. No surprise, when rioters think they can get away with murder (literally and figuratively,) they ramp up the violence, tear down statues, make crazy demands, target businesses for destruction, harass whites or others who don’t agree with them.

It’s time the progressive Democrats who run our cities and states wake up. Earn your pay check, keep your oath, and restore order. We shouldn’t have to wait till it’s your homes that are threatened as happened with Ms. Gray. You should do it because it’s what we elected you to do. Do your damned job, keep your people safe, protect our children.