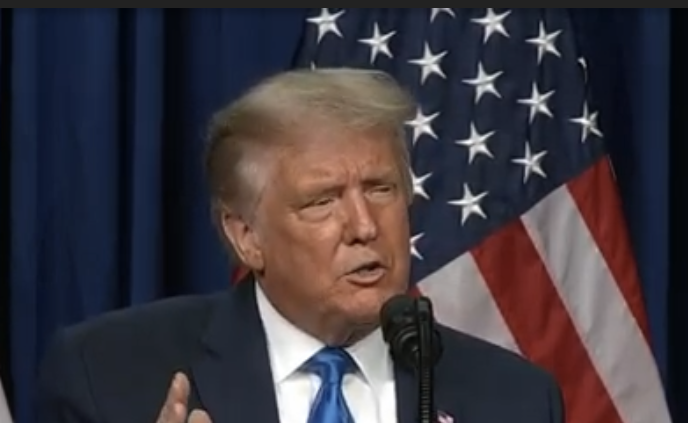 The GOP convention got a rousing start by an unscheduled appearance and speech by Donald Trump in Charlotte today. It was a great speech as well as an educational one. Trump was relaxed and in his element. He bantered with the crowd and injected humor into his remarks. Gee, I am confused. I thought Trump was overcome with fear that he was going to lose the election! That great intellectual Joey Scarborough predicted a few weeks ago that Trump may drop out by the end of the summer. HA!

One of my favorite moments of the speech came at the very beginning:

Trump: Now if you want to really drive them crazy, you say 12 more years.

Trump then issued a warning:

Trump focused on the mail in voting issue that Democrats are attempting to use to win this fall:

“Who’s mailing them? Mostly Democrat states and Democrat governors. Well, supposing they don’t mail them to Republican neighborhoods. That means they’re not going to get them. In the meantime, you might lose the election. This is the greatest scam in the history of politics, I think, and I’m talking about beyond our nation. And they act like they’re aggrieved. Like by saying this, we’re saying such a horrible thing. We’re not patriotic by saying this.

Most of the speech was Trump pointing to the accomplishments of his administration which have been MANY. Some I had even forgotten about (like defeating ISIS. When’s the last time terrorism even came up in the news?).

I love it when Trump throws the “magic wand” reference back at Obama.

“But think of your life just prior to the plague coming in. It was the best it’s ever been. Your state had the best numbers they’ve ever had, ever had, by far, and we had the best employment numbers also. We were up to 160 million jobs. We were never anywhere near that, and then we had to shut it down. We saved millions and millions of lives. We learned the enemy, we learned all about the invisible enemy, how it affects really people that are older, especially older people, the elderly, but older people with problems with heart and diabetes, with other problems, and we learned and most of the country is right now doing very, very well.”

Trump took credit for SAVING millions of lives with his actions against Covid. That will drive the left mad!

He’s talking about YOU, Andrew Cuomo.

“We’ve secured our borders. We’ve built our wall, which will be finished very shortly.”

This is another item that hasn’t been in the news much lately. But the wall IS being built. Someone please inform Ann Coulter.

“We brought back manufacturing jobs.”

This is one of the most important things Trump has done and it is critical that he be re-elected to do more on this. Once Trump is gone I don’t know what the future holds for this country but if there is a majority of constitutionalist judges in place, it buys us some time.

“We rebuilt our military. We wiped out ISIS. I mean, think of it. When I came, ISIS was all over Iraq. The Prime Minister of Iraq was in last week and he said, “I want to thank you for defeating ISIS.”

“We replaced the worst trade deal ever made, NAFTA, with a great USMCA deal, that’s going to keep our companies here and it’s going to be treating us very nicely. We fixed a lot of our broken and bad trade deals. We’re getting 40 billion now from Japan. We fixed a horrible deal that was made with South Korea. Remember, that was a Hillary Clinton special. She said, “This will produce 250,000 jobs.” And she was right. Except unfortunately, the jobs went to South Korea, not to us. And we stood up to China like nobody’s ever stood up. Between the tariffs and the trade deal, which now… Don’t forget, when I made that the ink wasn’t dry before the China virus poured into our country, right?”

Trump at his best using humor.

“We’ve got things that they said you couldn’t get done. We’re energy independence. And they said, “We want to ban fracking.” No fracking. How do you think they’ll do in Texas, Oklahoma, North Dakota? There’s no fracking. There’s basically… They want no fossil fuel whatsoever. Okay? No gas, no oil, no coal. No nothing. Okay.

So they don’t want anything. Now, they’re getting killed. Because a poll just came out in Texas. Texas wasn’t happy. They want no guns. They want no oil and gas. And they want no God. No God. It’s no religion, no guns, no oil and gas. I don’t think you’re going to do too good in Texas. George Washington could come back from the dead and he could choose as his VP candidate, the late great Abraham Lincoln. And you’re not going to win the state of Texas if you have no oil, no guns and no religion. I don’t think so.”

This next section is long but well worth reading as Trump explains how he brought down the price of drugs (something the Democrats always talk about but never actually do).

“We’ve cut drug prices, first time in 51 years, we got drug prices down. I did a favored nations clause. Meaning, we pay the same price as the lowest country that has the best deal. The companies are going crazy. Big pharma, they call it for a reason. There’s nobody that gives the politicians more money than big pharma. Nobody. Not even close.

And I instituted what’s called a favored nations clause. And it’s very simple. It’s whatever the lowest price in the world, we’re the biggest purchaser of prescription drugs by far in the world. So whatever the lowest price is that other countries pay. So if you have a country paying 25 cents for a pill and we’re paying $2.50 cents, and it’s not such an exaggeration, believe me, then we get it for 10. So what happens is that doesn’t work. So they’ll go up a little bit. We’ll come way, way down. So I said, “Favored nations. I want to pay what the lowest price is anywhere in the world. We’re the biggest purchaser, we want a favored nations. They had a heart attack. And then I signed it. They didn’t believe it. And now what they’re doing is they have ads, millions and millions of dollars worth of ads, that I’ve been horrible to the people because of drugs. And I believe in socialism. Socialism. You know why? Because some of the socialistic countries get the lowest price. So the only thing I have with socialism is I wanted to get their price. Okay. That’s the only thing. Other than that is our country will never be a socialist country.”

Trump then went after the left about the 2A and the riots. Expect to hear more about this during the convention:

“The other thing I’ve done aside from very strongly protecting your Second Amendment, which was not easy. That was not easy. And by the way, they will take your guns away as sure as you’re standing or sitting there. They will take your guns away, either that or obliterate the Second Amendment, the right to bear arms. You have the right to bear arms, especially when you look at a Portland and you see how weak those Democrats are. The governor, the mayor, how pathetic they let them riot every night. We’re saying, let us come in and solve your problem. We will solve it for you in one hour just like we did in Minneapolis, Minnesota, right? Five nights, six nights, they have to ask us in. Let us come in. We’ll solve your problem. We are going to fully fund law enforcement and hire more police.”

“We’re going to go with school choice and we’ve made a lot of progress on school choice for every student in America. We’re going to continue to expand opportunities zones. There has been nothing better. Don’t forget. It was us, us together that got criminal justice reform done. The greatest thing for the black community, African American community. They came and they said, “We can’t believe it. Obama didn’t even try.” And not only that, I got funded, the historically black colleges and universities. I got them funded. They weren’t funded. They were year to year. Nobody’s done more for the historically black colleges and universities than Donald Trump. Nobody. Nobody’s done more for the African American community. No president has done as much as anybody since, I mean, since, and I say it, since Abraham Lincoln. It’s true. It’s true. “

Lastly, I include this pledge from Trump, which will resonate with such a large majority of folks in this country:

“We will not be taking the word, God, out of The Pledge of Allegiance. Okay. Like they did a number of times at their caucuses, so they took the word God out. I heard it. I was listening and I said, “That’s strange.” It’s sort of weird. You’ve heard it all your life, right? Under God, under God. All of a sudden, those two words are missing. I said, “Oh, he must’ve made a mistake.” Maybe the teleprompter wasn’t working or his book wasn’t working that I have right here. Something wasn’t working. I must admit. But the problem was then the next day I heard it again. And I said, “That’s not a mistake.”

A great start to the 4 day GOP Convention!