Years ago, the leaders of our political parties would never have asked this question, they wouldn’t have to ask. Even if they disagreed on the specifics, they agreed the goal was to do what was in the best interests of people.

Not today; not even close. 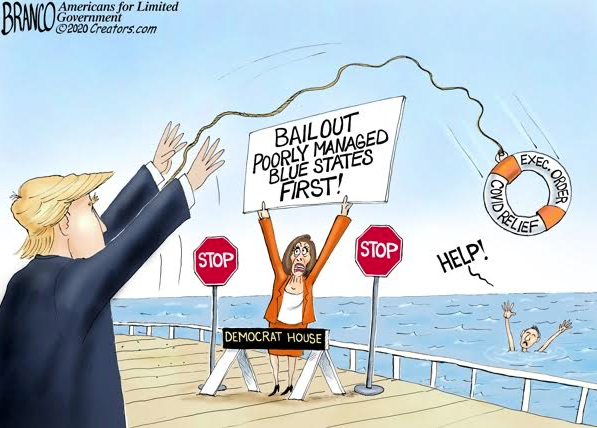 Nancy Pelosi, the Democrat Speaker of the House who chows down on $12.00 a pint ice cream while you’re wondering how to put dinner on the table during the Chinese virus, has single-handedly ended any discussion of helping people in the midst of this crisis. She rejected any chance for compromise even when the Trump Administration offered more than she was asking for. She doesn’t want a compromise. She wants people to suffer. It’s not in the best interests of the people, but she believes it’s in the best interest of beating Trump. It’s straight up politics over people.

The Trump Administration offered a trillion-dollar-plus plan to help the American people get through this next few months of the virus. It included:

These are all ideas very clearly intended to help people.

Democrats, on the other hand, walked away from the talks because Trump would not agree to:

Rather than hammer out a deal, Nancy Pelosi decided she and her band of anti-American progressives needed a vacation. I know we all feel for them: so over-worked!

So off Pelosi goes, along with her allies in Congress, to their second homes while the American people are left in limbo.

Meanwhile, taxpayers continue paying these people $175,000 a year plus perks, plus benefits, plus, plus, plus. It’s insulting that despite taking their paychecks, they decided to go on vacation while Americans suffer. Democrats should do their damn jobs.

That’s what Donald Trump is doing. President Trump is using executive action right up to the limit of his constitutional authority to get some relief to the American people. It’s not how he wanted to do it. And it won’t be all the help he wanted to provide. But this is the only option the histrionic Pelosi has left him.

What’s even more outrageous is that even now, Pelosi has instructed her lawyers to prepare a lawsuit against Donald Trump to stop him from helping the American people. It makes no sense if your goal is to help people. It makes a lot of sense if you only care about making sure Trump receives no credit for helping people.

So Pelosi and her gang want you and I to suffer rather than allow Donald Trump any glory.

It’s selfish, it’s partisan, and it’s un-American not to help people especially when it’s NOT your money, but it is your job.

For more than 3 years, Trump has been working non-stop for the American people. On the economy, he cut taxes for individuals and businesses, and eliminated expensive regulations that were crippling job creation. But the economy is only one way Trump has worked to help America’s families. He’s made vast improvements to our education system, he’s reformed criminal justice, he increased government efficiency, he’s rebuilt America’s national defenses, he’s made veteran’s health care functional again, he’s made vast strides in improving infrastructure, he’s set the terrorists – and the regimes that support them – back on their heals, and he’s started making strides to improve our dilapidated infrastructure.

Democrats, by contrast, have achieved almost nothing in the past 3 years. They had a flurry of mostly bad ideas and even worse actions just prior to the 2018 election, but since have been focused 100 percent on blocking Trump at every turn.

It would be one thing if any of their allegations against Trump were true; or even conceivable. They weren’t. It was all garbage. Russian collusion, Mueller, the FBI, quid pro quo, impeachment, blah, blah, and more blah. No proof. No evidence. No nothing. All just a pathetic attempt to poison Donald Trump’s chances for re-election.

For Democrats, the past 4 years have all been politics. It wasn’t the kind of politics that might result in any benefits for the American people either. NO. It was all Nixon-style dirty tricks intended to do exactly the opposite. The Democrats are driven by one idea: the more that Americans are made to suffer, the less likely it is Trump will be elected. It achieves nothing, wastes untold opportunities, and costs trillions in taxpayer money.

It is the exact opposite of what we pay members of Congress to do. It’s self-serving, and it’s corrupt. They’re cynical and craven liars intent on causing as much harm to Americans as they possibly can in the quest for political power.

They are proof the swamp is alive and well, and needs now, more than ever, to be drained, disinfected, and never again allowed to exist.

Cuomo Gaslight’s the DNC: “When we needed them [the Feds] they were there”

Greenfield: What Do Joe Biden and Kamala Harris Have in Common? Sexual Harassment