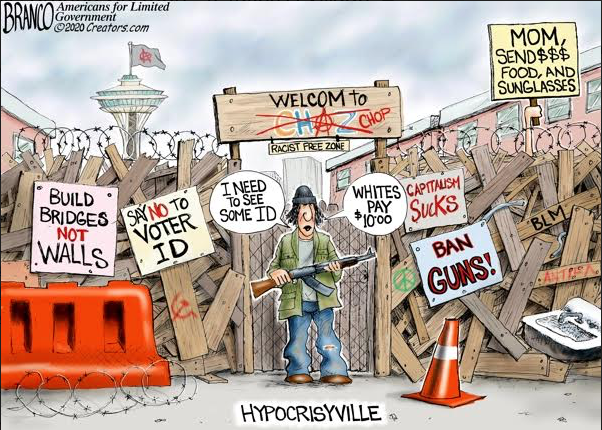 Black Lives Matter commonly chants, “What do we want? Dead cops. When do we want them? NOW!”  They’ve chanted it long before Mr. Floyd’s murder by a bad cop.

The chanters are talking about men and women who risk their lives to protect our’s, and BLM’s. Yet BLM wishes them dead. How very tolerant, how civil, how utterly disgusting.

On those occasions when I’ve been pulled over for a bad tail-light or whatever, my first reaction is not one of thanks to the police for a job well done. In fact, there may even be some unkind language that emerges. But no matter the ticket, or warning, I thank the officer for doing his job and keeping us all safe.

Not so the anarchists and radicals now tearing up America’s biggest cities. One senses though something even more malevolent than hatred for police – as bad as that is.

That suspicion is starting to become tangible. Nick Cannon, a popular YouTube host, rapper, and television star was recently let go by Viacom for engaging in hate speech against Jews. Cannon did indeed talk irrationally of anti-Semitic conspiracy theories. But what Viacom, and most of the press, have not discussed is Cannon’s calling white people “sub-human,”barbaric,” and the “true savages.”

Cannon’s comments seem to clear any moral barriers to not just killing police officers, but killing anyone who isn’t black as well.

Meanwhile, the media continues to mostly stand by silently as killings of blacks by other blacks rages through the city of Chicago. Last Monday alone, 22 people were shot including a 10 month old little girl. She was taken to the hospital where she is in critical condition.

And Chicago is not even the worst city in the country when it comes to the number of people murdered per 100,000. That honor belongs to St. Louis. Next, comes Baltimore, Detroit, and New Orleans. You have to get down to 12th on the list to find Chicago.

If you are inclined to think this is all good entertainment, just good sport and no big deal; then Joe Biden is for you. He offers no solutions other than disarm law abiding citizens, surrender to the mob, and “reallocate” funds from police departments to other community needs.

Joe Biden’s mentor in the Senate, Robert Byrd, was once the Exalted Cyclops of his KKK “Klavern,” the top job in his chapter of the klan.

Biden led the fight for legislation that jailed blacks for minor offenses. He’s a huge supporter of abortion which kills 300,000 black babies every year. And Joe’s caved into public teacher unions who want to close charter schools so families can decide for themselves.

In short, Joe couldn’t care less if you or your kids ever get a good job or get out of the neighborhood.

Joe, and his progressive Democrat friends, don’t care about our country, our history, or our laws. The only thing, and I mean the only thing, Joe cares about is becoming President of the United States of America. Sometimes it seems like he’d be ok if he only lasts a day as long as he gets the big parade and his name in the history books.

Joe has moved so far to the left that those in the middle need binoculars to spot him in the crowd of Bernie, AOC, Pelosi, Chucky, and the rest of the squad.

Once the left are done pulling Joe’s strings, the Biden-leftist mob will make sure America looks nothing like the America most of us know and love.

And it’s unlikely we’ll ever get the chance to change it back again. They’ll increase the number of judges on the Supreme Court which gives them a bunch of picks right off the bat. They’ll eliminate the Electoral College so future national elections will be determined by voters in California, New York, and Illinois. And they’ll move 22 million illegal immigrants onto the path to citizenship with all the voting power that entails. As they elect more corrupt governors and legislators in the states, they’ll redistrict Republican members of Congress right out of existence.

I don’t think they’ll wait long either if they win in November. They’ll be in a hurry to get it done before the 2022 elections.

That also means they’ll move quickly to disappear conservative talk radio, limit free speech to those who agree with them, and cancel those who don’t by limiting their chance to make a living.

Sure it’s all unconstitutional, but their propaganda arm, the National Education Association, hasn’t taught students the constitution for decades so it’s unlikely many people will notice.

And don’t think free speech is only what comes out of your mouth, the woke operatives among us have succeeded in getting Aunt Jemima and Uncle Ben to change their names, scolded Trader Joe’s into discontinuing their ethnic food products, and launched a boycott of Goya foods because the owner said something nice about the President.

Don’t expect it to stop there either. A 24 year old mother, gathered with friends on a lovely summer evening, happened to mention she believed, “all lives matter.” Apparently, hers didn’t.  A few hours later, she was gunned down in front of her fiance. So much for free speech.

You, and many others, may not love Donald Trump’s tweets; but when the media lies about nearly everything he does or says, his only hope is to go directly to the American people. The truth is that whether you like him or not, at this moment Donald Trump is the only thing that stands between us and a future America you and I wouldn’t recognize and don’t want to live in.

Want Real Change? Make Your Local Politicians Do Their Jobs!