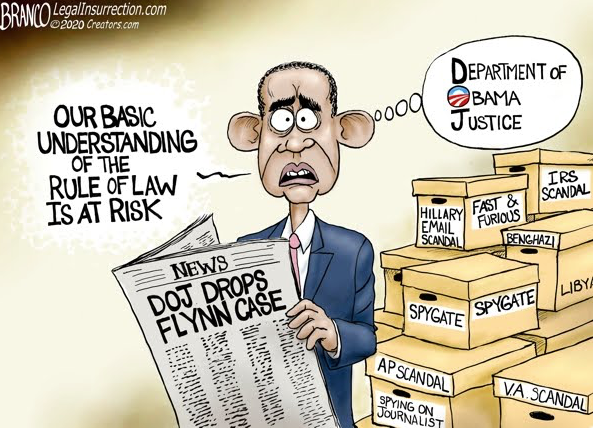 Have regular Americans become numb to the craven dishonor of leaders we once trusted and followed? In the press? In Congress? Even at the highest levels of American law enforcement?

General Flynn is probably the closest example of honor any of us could know. He’s an American hero who repeatedly put himself in harm’s way over a 33 year military career.

It’s important we revisit this event because it shows just how upside down the Obama-Biden Administration turned the concept of rule by law.

James Comey and a gang of thugs in the Obama Justice Department wanted to get Trump so they decided to set up his National Security Advisor on what is called a “perjury trap.”

The agents who were instructed to set the “perjury trap” said they couldn’t find any indication Flynn was lying. None. But Obama goons in the FBI and Justice Department didn’t care.

They were determined to set up General Flynn, embarrass Trump, and create the phony basis for a Russian collusion investigation. So they threatened General Flynn.

First they drove Flynn into bankruptcy and forced him to sell his home by dragging out the trial. Then they told the General that if he didn’t sign a plea bargain admitting he’d committed perjury they would arrest, prosecute, and jail his son!

So Flynn signed. This 33 year American hero went to prison because the FBI forced him to lie or see his son persecuted, bankrupted, and jailed.

Every American should be ashamed and outraged by the Obama Justice Department, and the FBI under Obama appointee James Comey.

All of those involved in this travesty; the Obama Administration, the media, the Democrat politicians who sought to score points over the destruction of General Flynn, should fall to their knees and beg forgiveness.

They should start by asking the forgiveness of the general himself. Then they should apologize to his family who suffered terribly while his savings were destroyed, his reputation ruined, and his career wrecked.

Then they should ask the forgiveness of their fellow Americans who they sought to rally against Donald Trump by persecuting and destroying his National Security Advisor and launching a phony investigation into Russian collusion.

And finally, they should seek the forgiveness of all those brave American men and women who serve our country in uniform. Their persecution of a man who had given so freely and so sacrificially for so long betrays an utter lack of regard for the work America’s military veterans and service-members have done and continue to do to keep them safe, happy, and enjoying the benefits of American society.

Everyone who participated in Flynn’s slander should be ashamed and held to account.

Fortunately, Attorney General William Barr is still digging. I pray he finds everyone involved in perpetrating this fraud and roots them out.

I also hope General Flynn sues the Department of Justice and the FBI for the illegal misconduct they committed. He deserves an honest day in court. And he deserves the return of his reputation, his savings, and his career.

I wish that was the only example of dishonor I could cite from Democrats in the last few years. Not even close.

You’ll remember Democrats called for an extensive FBI investigation into similar charges against Brett Kavanauagh. They insisted the woman must always be believed no matter how scant the evidence. And yet when Biden was accused by a former staffer with significantly more evidence than was brought against Kavanaugh, everything changed. When that happen, what we heard is the woman should be investigated.

Hillary and Pelosi were among those who endorsed Biden without mentioning the charges against him.  In fact, so was every Democrat woman in the U.S. Senate. They are happy to ignore the allegations, or worse, accuse the woman making them of not telling the truth.

And let’s not forget all the progressive politicians who accused anti-lockdown protesters of selfishness and greed, and suggested they would be arrested for violating social distancing orders; while those same politicians actually joined giant protests in the street a few weeks later to honor black lives matter. I’m not against protests when they’re non-violent, but I am appalled by the hypocrisy and double-standard of politicians who claim due to Covid concerns, protests for one cause are immoral, while for another Covid doesn’t matter.

Those same progressives now say schools should stay closed due to the virus, despite the science that says children are the least likely to suffer from the virus, but extremely likely to experience a much more harm to their health, their nutrition, and their safety from domestic abuse — especially children who are disadvantaged.

If you don’t believe honor has taken a nasty hit in recent times, it doesn’t get much more plain than this. The leftist politicians who run our cities and states – Seattle, Portland, Los Angeles, Chicago, Minneapolis, New York City, Atlanta, and so many more — have pretty much thrown their police under the bus. They’ve implied police are racist and irredemable. They’ve called for, and in many cases, defunded police – or in the words of Joe Biden “redirected” funds intended for policing and public safety.

It’s more than dishonorable; it’s crazy and it’s dangerous. At least partly as a result of this hare-brained attempt at virtue signaling, crime has exploded in cities run by Democrats — especially murders.

While you wouldn’t know it from the attitudes or actions of liberal politicians and media elites, honor isn’t actually dead in America.  It’s on full display at nearly every turn as  regular Americans serve and care for one another during all the crisies we face now — the pandemic, the economic meltdown, and the violence in the streets.

In fact, I’m hopeful the bass-ackwards repudiation of honor and decency almost daily by the left will so appall Americans that we finally see voters punish the craven disgrace of progressive Democrats.

If that happens, Trump will win, and he’ll win by a landslide.

Greenfield: Billions Are Being Spent on Teachers Who Won't Teach: Pres. Trump Can Change That