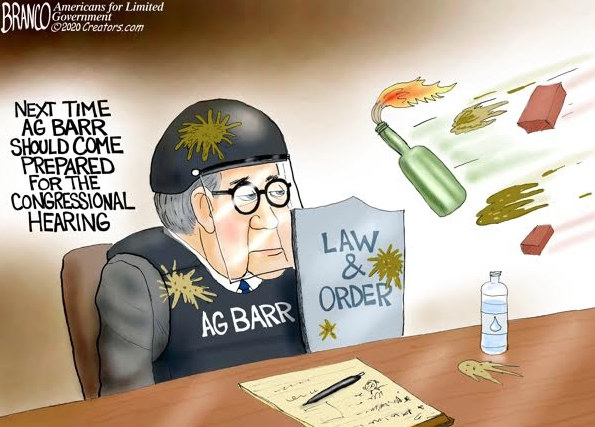 If you really strain your brain, maybe you can remember the last time you heard “please,” “thank you,” “you’re welcome.” Our parents called these words “magic.” You used to hear them all the time. Back then, society was a much kinder place.

Recently during a hearing by the House Intelligence (an oxymoron) Committee, Bill Barr was interrogated and berated. I’ve never been so embarrassed by my government or its representatives. Their rudeness was equalled only by that of the current BLM and ANTIFA radicals.

The people on the committee behaved as though they were gods. They’re not, each is only one of 435 members of Congress, equal to every other.

Still, they showed nothing but disrespect and contempt for the Attorney General of the United States, and a member of the president’s cabinet. While Barr was trying to answer a question, one Democrat erupted, “Don’t you dare interrupt me.”

One after another, as AG Barr tried to answer their accusations and defend himself and the president, the Democrats on the panel called out, “I reclaim my time, I reclaim my time.” It was the most popular refrain any of them uttered, and nearly all of them did so. It was very clear they were there only to rant and rave, and had not the least bit of interest in hearing a reasoned or truthful explanation or the President’s policies. They only wanted TV face time to attack the AG and the president. Every time they spoke, they did so with contempt for a man who would dare work with the person they hate more than any other, Donald Trump.

At one point, Attorney General Barr asked for a 5 minute break to use the men’s room. Certainly not an unreasonable request. Committee Chair Gerald Nadler declared “NO” in a most dictatorial manner. Several of the Republicans came to Barr’s defense, and the rude dictator eventually gave in. But not first without making it clear that forcing Barr to sit in his own urine would have pleased Chairman Nadler far more. His performance proved again he is little more than a short, rude and not very bright dictator.

In a Congress – and a society – where it’s acceptable for a first-year Democrat Congresswoman to announce her intentions regarding the president, “We’re going to impeach the mother-fxxxxer,” with no apologies, and no sanctions, is it any wonder these Democrats feel entitled to treat our Attorney General with such rudeness?

I like to think my father did a pretty good job teaching good manners. Hold the door for anyone behind, help those who need it to cross the street, offer my seat to a lady if seats are limited; and always, be grateful, say thank you and please. My dad taught me to never interrupt, respect my elders (at my age, not many of those anymore,) and respect the rights of others.

In watching the Democrats in the committee hearings, I couldn’t help but wonder what kind of manners these arrogant, rude and mostly ignorant people learned growing up. Their fathers clearly did not teach them well.

Or maybe it’s that they are simply so full of themselves, believe themselves so superior to the rest of us, because of their high political position. Do they believe their political office gives them the right to abuse whoever they choose? Certainly, they proved what low-lifes they are when they impeached a president for NOTHING. They found nothing, they proved nothing, and yet they, nonetheless, put the entire country through the brutal ordeal of impeachment for absolutely no reason other than that they were so full of hate and malevolence.

It seems to me everyone’s time would have been much better spent if Chairman Nadler (you know, the New York Congressman who claimed ANTIFA is only a myth) had put a giant photograph of the Attorney General in the witness chair and allowed all the Democrats to hurl abuse for two hours. It would have accomplished exactly the same thing: absolutely NOTHING!

Granted, the President occasionally goes off the ‘politeness wagon,’ in referring to his opponents with pet names; ‘Rocket Man’ comes to mind. It’s not all one sided, but the President does it almost always to defend himself against deceitful attacks by others. The 435 egomaniacs in Congress, on the other hand, aren’t defending themselves, they originate the attacks. They believe they are superior to the rest of us – and to the president. It’s disgusting and revolting.

And yet these very same people have the gaul to lecture and point fingers at our Attorney General and other members of the Administration.

Most members of Congress are very far from sainthood, and yet they look down on us with condescension and contempt. It’s beyond repulsive. How dare they?