What can you write on the sidewalk?

In Washington D.C., two activists with Students for Life were arrested for chalking, “Black Pre-Born Lives Matter” outside a Planned Parenthood abortion facility.

After months in which “Black Lives Matter” along with the names of assorted criminals has been ritually chalked, painted, and splattered on sidewalks and streets across America, the concept of vandalism had been rediscovered for conservatives who defend the black lives yet unborn. 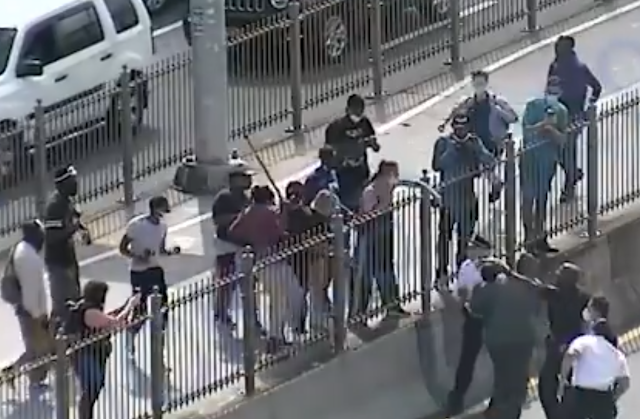 The activists were charged with defacing public or private property for using chalk, that is easily removable, in a city whose mayor had made a point of painting Black Lives Matter on the street leading to the White House in support of the attacks on the nation’s capital by BLM rioters.

And when BLM activists added “Defund the Police” to Bowser’s original racial supremacist slogan, they were not arrested and no law enforcement personnel dared to interfere.

The case of the arrested pro-life activists in Washington D.C. is not unique.

In New York City, Scott LoBaido, a local artist who had been painting American flag murals, decided to paint a thin blue linearound a police station in support of the NYPD. And the Department of Transportation ordered him to remove the thin strip of blue paint from the middle of a median because it violates the rules against the “defacement of any street by painting”.

According to LaBaido, no permit was ever granted for that.

When asked if Women for America First, a conservative group would be allowed to paint, “Engaging, Inspiring and Empowering Women to Make a Difference!” on the street, DeBlasio dismissed the idea that anyone, except Black Lives Matter, should have that privilege.

“Everything’s individual and specific,” the leftist pol insisted. That’s the opposite of equality before the law. A fundamental principle of both American jurisprudence and civil rights.

De Blasio claimed that America was racist and that Black Lives Matter “transcends any notion of politics.”

Not long ago, American transcended any notion of politics and racial supremacism was racist.

The insistence that the racial supremacist message of Black Lives Matter is above politics is clearly false. If it were above politics, there would be no debate or dissent on the subject.

And that’s exactly what the radical backers of the racist hate group are trying to accomplish.

Even as Black Lives Matter bigots have vandalized churches and synagogues with their hateful messages, torn down statues and defaced memorials while going unpunished, Democrat officials have helped them tear down monuments and paint their hateful messages while aggressively punishing those who chalk different messages or erase the BLM message.

Eight people have been arrested in New York for pouring paint on the hateful BLM mural.

That includes Bevelyn Beatty and Edmee Chavannes, two black women from At the Well Ministries who are opponents of BLM, and had previously protested abortion clinics.

“If someone tries to deface it, that’s an offense. They’ll be arrested, and we will repaint it again,” De Blasio warned.

But no charges were pressed against the BLM bigot who vandalized St. Patrick’s Cathedral.

In California, a couple who painted over a racist Black Lives Matter mural were charged with violations of civil rights, vandalism, possession of tools to commit vandalism, and a hate crime.

That’s the same state where statues of St. Junipero Serra, a Catholic saint, Francis Scott Key, the poet patriot who penned the “Star-Spangled Banner”, and Ulysses S. Grant, who defeated the South and ended slavery, were torn down without any condemnation by Democrat officials, with no interference by police, and without any actual arrests being made or charges brought.

Selective prosecution for the same offenses based on their political motives is the definition of civil rights violations. And BLM’s Democrat backers are violating civil rights on a massive scale.

If chalking on public sidewalks is illegal, it should be illegal for everyone.

If tearing down statues and defacing monuments is no longer a crime, then throwing paint on Black Lives Matter signs on the street should not lead to arrests, let alone prosecutions.

Democrat politicians have justified these illegal abuses of authority by insisting that the statues of everyone from explorers to founding fathers to saints are “divisive” and that the BLM messages are signs of “unity” while the attempts to erase them are “divisive”.

These are not legal standards. They’re the authoritarian slogans of a totalitarian regime.

When a government declares that the slogans and symbols it deems “divisive” can be destroyed at will, without penalty or prosecution, but that vandalizing its slogans is “divisive” and these divisive perpetrators will have every conceivable law in the book thrown at them, that’s tyranny.

Americans have been told by liberals for generations that there can’t be any law outlawing flag burning because, no matter how much the symbol is cherished, it’s protected speech.

And most Americans accepted the argument.

But now those same liberals loudly insist that their valued symbol supersedes speech. Its desecrators must be fired, prosecuted, and jailed even while murderers are being freed.

Ordinary Americans have been fired all over the country after they were filmed taking down hateful Black Lives Matter signs with the media running videos that helped identify them. Meanwhile the media has resisted turning over footage of BLM statue vandals.

While Black Lives Matter mobs in Portland burn stacks of bibles and flags, police officers are dispatched to protect yellow lines of paint on a Manhattan street.

This is not America. These are scenes out of some Communist dictatorship.

Equality doesn’t mean a diverse group of activists shouting the same slogans. Rather it means that everyone is treated equally under the law. That is manifestly no longer the case. Instead, leftists are allowed to vandalize private and public property, while conservatives are locked up.

Democrats and their leftist allies have inaugurated a new tyranny of ideas in which their symbols are protected as sacred while American symbols and monuments are torn down like garbage.

That is an insult to the First Amendment and to any notion of a free and equal society.

If the only thing anyone is allowed to chalk on a sidewalk is “Black Lives Matter”, then that hateful slogan represents the tyranny of ideas of a regime and its media propaganda corps.

Resisting that tyranny of ideas is the real civil rights movement. Painting “Black Lives Matter” on a street is an act of oppression. Throwing paint on it is an act of civil disobedience. And that will remain so while politicians treat BLM as the view of the state and repress its political opponents.

America has entered a political culture war in which athletes are forced to explain why they dared to stand for our country’s national anthem, and the statue destroyers demand the right to vandalize our sacred symbols and to prosecute Americans who paint over their racist slogan.

That is not civil rights. It’s the antithesis of it.

Like that Russian, Americans can write anything they want on the sidewalk, as long as it’s “Black Lives Matter.”