How much did it cost to buy Biden’s VP Spot? About $3.5 million.

That’s how much Senator Kamala Harris’ virtual fundraiser for Biden brought in back in June.

That not only beat Hillary’s total, but swamped every other Democrat fundraiser for Biden, except the Obama one, which brought in over $6 million for his old incontinent flunky, and Warren, who brought in more money in total, but had the misfortune of being a white woman.

The virtual fundraisers were the real beauty contest for the money hungry Bidens. And Kamala Harris won them in a swimsuit of money long before the official announcement was even made.

Susan Rice could hardly compete with a paltry $24,000 donation to Biden. 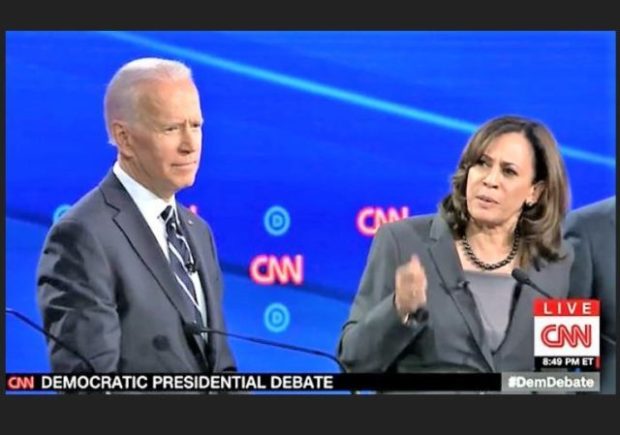 “She’s been a fighter and a principled leader and I know because I’ve seen her up close, and I’ve seen her in the trenches,” Biden gushed about the California politician.

The trenches that Biden had in mind weren’t in the fields of France, but at high-end fundraisers.

Another one of Kamala’s virtual fundraisers for Biden in July brought in another million.

It’s been estimated that Kamala raised a total of $5 million for Biden.

What was Kamala’s secret? She’s plugged into a network of wealthy donors who got her to the Senate. And then poured over $40 million into her failed presidential campaign.

The fundraisers showed Biden what Kamala could bring to the party. And it wasn’t just money.

It wasn’t just Willie Brown who got Kamala to the top. It was money.

Kamala had built her political career on tapping into big money in San Francisco and then statewide. She routinely outspent her opponents in her political campaigns. In 2016, she bought the Senate race by raising over $15 million and outspending her opponent almost 4 to 1.

More than half of her presidential campaign was funded by $23 million in large contributions.

That, and not small donors, is what Biden has been running on. After Kamala Harris dropped out, the Biden campaign “aggressively” pursued her donors. Now he doesn’t need to. After the DNC’s clown car primary with its obsession with small donors, the jackass party is jettisoning the pretense that it cares about anything other than big donors and their giant wads of cash.

As CNBC notes, “her addition to the ticket could help push the Biden campaign over the top in the cash race with Trump.”

Michael Kempner, a top Democrat donor and the head of one of the country’s biggest PR firms, gushed, “she has a strong and active fundraising organization. She will be an important and immediate addition to the Biden fundraising effort. She is a fundraising star.”

Did anyone seriously think that Biden would pick Stacey Abrams, Rep. Karen Bass, or Susan Rice, when he can marry Mrs. Moneybags for her money and the donors that come with it?

Once Team Biden decided that they had to have a black woman in the second spot, there was only one that came with sacks of money. And there was only one who could tap into the massive reserves of California cash that has been used to transform elections nationwide.

Wall Street executives are already cheering the pick. So is Hollywood.

And the black community got played.

But what else is new?

The Democrats picked the daughter of an Indian doctor who was raised in Montreal and claims that her favorite band is “Salt and Pepper” as the new big step forward for African-Americans. They disregarded the almost universal opposition to Kamala’s candidacy by the Congressional Black Caucus, and by virtually every black activist within their own party, because of the money.

The Biden campaign told black Democrats that Kamala’s money matters more than they do.

And black Democrats will be expected to back Kamala up as she spends the entire campaign accusing President Trump and Republicans of racism and sexism for opposing her. These accusations will ring hollow among black voters, just as they did when Kamala was lobbing them at Biden. They fell flat when Kamala tried to keep her campaign going by accusing the entire primary field and the Democrat electorate of racism and sexism for not picking her.

Biden supposedly picked Kamala to appeal to black voters, but he beat her among black voters.

Toward the end of her campaign, Kamala was only polling at 4% among black voters while 20% had an unfavorable view of her.

But the Biden-Harris campaign is ready to reboot the racism and sexism charge all over again as it deploys the liar who accused him of racism to falsely smear President Trump as a racist.

The question that President Trump ought to ask is was Kamala lying then or is she lying now?

Before the official announcement, the Biden campaign was already officially coordinating with the abortion groups, that have killed countless black babies, and Emily’s List, to smear Republicans and the Trump campaign as sexist and racist for criticising Kamala Harris.

Meanwhile, when Biden’s VP search committee asked her about accusing the man at the top of racism, she allegedly, “laughed and said, ‘that’s politics.’”

That’s the level of contempt that Senator Kamala Harris has for the serious charge of racism. All those stories about her plight in “segregated” Berkeley while growing up as the daughter of wealthy upper class parents were a cynical political joke. And black people didn’t buy into it.

The question is whether black voters will buy into it when they’re aimed at Republicans. And whether they’ll let themselves be used as fronts for more false exploitation of racism by Kamala

Joe Biden showed that he cares more about white donors than black voters. And that what he really cares about isn’t race, even as he’s trying to use Kamala’s assumed racial identity to play on white guilt and racial idealism, but money. That’s all the Biden family has ever cared about.

And if this is how Biden is treating the black community before the election when he actually needs their votes, imagine how he’ll treat them afterward when he doesn’t need them anymore.

Barry Shaw: A President Kamala Harris? Catholics Must Be Quaking in Fear

The Fight Of, And For, Our Lives