49 Chicago police officers were injured by rocks, pipes, and fireworks while trying to defend the statue of Christopher Columbus in Grant Park. Despite their valiant defense of the man who discovered America, Mayor Lori Lightfoot sided with the BLM mob and had the statue removed anyway.

3 law enforcement personnel with the Department of Homeland Security’s Federal Protective Service may face permanent eye injuries after having lasers shined in their eyes by Black Lives Matter rioters.

12 police officers were injured in Seattle by attackers throwing rocks, bottles, and fireworks 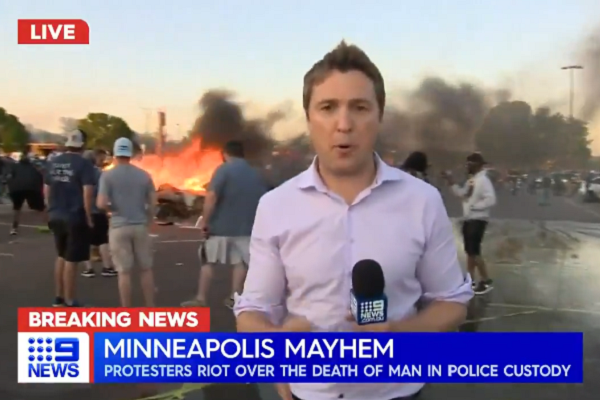 These are some of the injuries suffered by large forces in a matter of days. By early June, I had tracked the cases of over 400 injured law enforcement officers in under two weeks of BLM riots. A month later, there are too many cases and too little reporting to even begin assembling any kind of complete picture.

Law enforcement officers have come away from what the media continues to falsely describe as “mostly peaceful protests” with fractured skulls, eye and ear injuries, and broken bones. Officers have been hit with bricks, baseball bats, and broken bottles. They’ve been shot, stabbed, and run over by vehicles.

The full total is not in the hundreds: it’s in the thousands. That’s a war zone.

And that’s just the law enforcement officers. No count has been kept of the civilians assaulted by the rioters. No one has assembled a list of store owners beaten and robbed by Black Lives Matter rioters.

This is wildly inconsistent with the media’s repeated false claims that the Black Lives Matter riots have been “peaceful”, “mostly peaceful”, “largely peaceful” or any other weasel words and modifiers.

Protests that injure thousands of police officers and cause billions in damage are not mostly peaceful.

They are mostly violent.

Carnage on this scale is not an accident or the work of a handful of unrelated people, as the media continues to falsely insist. When riots wound thousands and cost billions, the violence is not the aberration, it defines what the protests are and what they are intended to accomplish.

“The violence and pain and hurt that’s experienced on a daily basis by black folks at the hands of a repressive system should also be visited upon, to a degree, to those who think that they can just retreat to white affluence,” is not what a peaceful Black Lives Matter protest organizer sounds like.

The calls for violence and the acts of violence that define Black Lives Matter are not peaceful.

If Black Lives Matter were a peaceful organization, it would not draw its inspiration from Assata Shakur, who is wanted for murder by the FBI, and was the first woman on the Most Wanted Terrorist List.

Nationwide riots by a group that draws its inspiration from a domestic terrorist are not peaceful.

The media has covered this up by making a mockery of cause and effect and offering ridiculous euphemisms for violence that explain how mostly peaceful protests have ravaged entire cities.

Are Black Lives Matter protests werewolves who turn violent when they see the full moon? Does the night have some magical power that turns formerly peaceful protests into violent assaults?

If a protest is inherently peaceful, aggressive law enforcement won’t change that. Reopen protests by conservatives faced aggressive enforcement without resulting in rioting and looting.

The violence of the riots correlates with the left-wing politics of the elected officials in charge.

Cities with the most left-of-center politicians are likely to experience the worst riots. It’s not aggressive law enforcement that causes violent riots, but the lack of decisive intervention against the rioters.

The media has tried to blame the police and the time of day for the riots, instead of the rioters.

A peaceful protest is not defined by the absence of violence, but by the presence of peaceful intent. The repeated false claims that the protests are peaceful completely distort the basic meaning of the word.

A Neo-Nazi rally doesn’t turn violent. A Communist march doesn’t turn violent. Black Lives Matter was founded by self-described Marxists. The movement is interlaced with ties to the Nation of Islam. The rhetoric of its marches is violent, punctuated with obscenities, false claims of genocide, and racist taunts aimed at white people. These are not the components of a peaceful, but of a violent racist movement.

Violent movements are not violent all the time. Not even the most violent fanatic is always violent.

Rioting, burning, looting and throwing explosives only at night or on the weekend is not peaceful.

Racial nationalist groups, whether it’s the KKK or BLM, have a First Amendment right to protest. They have a right to threaten violence in the abstract, to brandish weapons, and to otherwise engage in posturing. But once that posturing turns into real violence, they don’t deserve the benefit of the doubt.

And they certainly don’t deserve the benefit of the doubt when their hate rallies repeatedly degenerate into violence in cities across the country leading to thousands of injuries and billions of dollars in losses.

The only people who think otherwise are their political allies among Democrats and the media.

Their mostly peaceful protests have devastated cities and they mostly won’t stop lying about them.

Are Leftists Creating A Country Not Worth Saving?