“We don’t need somebody who’s a sworn officer and a gun in order to be able to accomplish what the community needs done,” Mayor Steve Adler falsely claimed.

Austin’s proposed budget targeted millions in cuts. These included 100 vacant police positions, delaying the next cadet class, delaying the replacement of duty weapons, and there were proposals by some Democrats council members to shut down the police academy, cut the bomb squad budget, and even demolish the city’s downtown police headquarters. 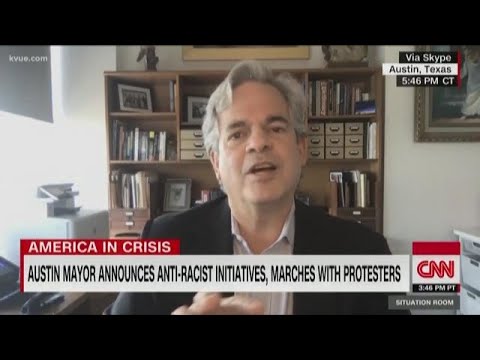 Politicians limited the ability of police officers to use force against criminals and barred them from using pepper spray and tear gas against the violent mobs of Black Lives Matter rioters.

Now Austin is number one with a bullet after its homicide rate increase passed every major city.

Overtaking more violent cities like Chicago, left behind at number two, Philly at number six, and New York at number eight, Austin had the highest percentage homicide rate increase. Like the ‘Miracle on Ice’ in the 1980 Winter Olympics, Austin is the underdog that came from behind to blow everyone away with its ability to rack up bodies even faster than vegan soy hot dogs.

Austin’s percentage rate increased 64% over the year and 67% in June.

It just goes to show that even an underperforming bunch of criminals can really accomplish great things when the politicians get behind them and get the cops off their backs. If you don’t believe that defunding the police works, just stop by an Austin morgue.

Adelaido Bernabe Urias, a 68-year-old Mexican immigrant, was pushing his ice cream cart past a housing project when Marquis Davis, Jermaine Jones, and Devlon Wardy, allegedly pretended they wanted to buy ice cream from him, demanded money, and then shot the elderly man.

When some Karen called the police, the dying Mexican ice cream vendor told officers that he had been shot by three black men becoming an accomplice to the system of racist policing.

The perps were caught after the Austin Greater Crime Commission and the Austin Police Association, who had spoken out against police defunding, put up the reward money.

The Austin Justice Coalition, advocates for police defunding, didn’t bother contributing their funds to catching Urias’ murderers. His life was not the kind of life that ‘matters’ to them.

Jermaine Jones had posted a photo with a gun on his Facebook page before the murder.

The police had busted Marquis Davis a few days before the murder for aggravated assault with a deadly weapon, but fortunately they let him go because the enlightened progressives of Austin understand that bail is racist and criminals must be freed from prison so they don’t get sick.

Davis didn’t catch the Wuhan Virus in prison. Instead he may have killed someone’s grandpa.

The thug was freed with an ankle monitor. Pro-crime progressives insist that an ankle monitor is just as good as locking up a criminal behind bars. Urias could not be reached for comment.

The Mexican immigrant started selling ice cream after being laid off during the pandemic. Now the ice cream man is gone. And that’s the price we pay for a society that is kinder to criminals and crueler to their victims. We can have ice cream men or criminals on the loose, but not both.

There is lots of good news from Austin.

Not only were murders up 67% in June, but justifiable homicides had gone up 200%. When you defund the police, some people won’t lie down and die for the thugs.

Over the year so far, extortion is up 113%, stolen property is up 71%, prostitution is up 138%, and bribery is up 100%. How these may be interrelated is left as an exercise for the reader.

Between the incest and the extortion, the robberies and the bribery, the stolen property and prostitution, things are great. And that’s before defunding the police has even really kicked in.

Austin progressives have finally made sure that the police won’t be shooting anyone.

Like Maurice Pierce, who was shot and killed at a traffic spot ten years ago after he grabbed a knife from a police officer’s belt and cut him. Pierce had been one of the suspects in Austin’s infamous yogurt shop murders, in which the charred naked bodies of four teenage girls were found in a burned shop. After the latest police reform measures, Pierce would still be alive.

None of this has caused advocates of defunding the police to rethink their position.

“The City has started down the path toward ending this injustice but we have further to go and we must stay the course to redefine public safety in Austin,” City Manager Spencer Cronk had boasted.

It’s safe to say that public safety in Austin has been redefined. And staying the course will really redefine it. Defunding the police has helped put Austin alongside Chicago on the growth list of homicides. And while Austin is still lagging its older more murderous brother by a lot, violence is a growth industry and the hipster hellhole is showing real promise.

Austin’s Democrat leaders have claimed that they are just giving the “community” what it wants. But most Austin residents areopposed to defunding the police and getting rid of cops.

A poll by the Greater Austin Crime Commission found that 53% of city residents don’t want a reduction in the number of cops. Nearly half of city residents think that Austin is on the wrong track and only a third think it’s going the right way. The right way being straight to hell.

But as long as they keep voting for radicals, nothing will change. Except for the worse.

Before this year, playing a word association game with Austin would have produced answers like, “annoying hipsters”, “vegan bakeries”, and “obscure indie bands.”

Now that word association game has another answer: murder.

Defund the police and the death rate will follow.