In 1932, the Folger Shakespeare Library was dedicated on Shakespeare’s birthday with President Herbert Hoover and Robert Frost in attendance. The Library would house the world’s largest collection of Shakespeare First Folios, and and hundreds of thousands of volumes gathered across the centuries.

“In almost unbelievable fullness and richness, we assembled books, pamphlets, documents, manuscripts, relics, curios,” James Quincy Adams Jr, its first director, wrote. “The library is thus more than a mere library; it is also a museum of the Golden Age of Elizabeth, and a memorial to the influence that Shakespeare has exerted upon the world’s culture.”

These days, the Folger Shakespeare Library has a new mission. And it isn’t Shakespeare. 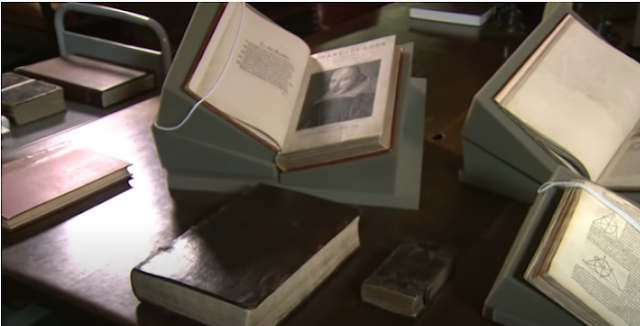 After George Floyd died during a confrontation with police, the director of the Folger Shakespeare Library declared that, “the fight against racial injustice is essential to what we do as an institution.”

In the Soviet Union or Mao’s China, every subject, no matter how abstruse, had to be studied through the lens of Marxism-Leninism or Maoism. Shakespearean characters, according to the Communists, were revolutionary figures, and were trying to solve the “central problems” of a “bourgeois society.”

But what the Communists did to Shakespeare was nothing compared to the Folger Library.

The Critical Race Conversations are the outcome of a formerly respected institution declaring that diversity is “central” to its mission with a focus on race, sexual orientation, and gender identity.

Its current fellows include the likes of Wan-Chuan Kao, who claims to be a “queer medievalist of color” and applies Robin DiAngelo’s racist White Fragility tract to characters in Chaucer turning pale.

The Critical Race Conversations are built around Critical Race Theory, a Marxist idea taking root in an institution founded by a Standard Oil executive, which reduces all human society to racial tribalism.

Much like Soviet analyses of Shakespeare, the current crop have nothing to say about the Bard, and, like their Communist counterparts, they don’t especially care about the Bard. Communist academics was roughly divided between censored scholars who knew that the only way they could discuss their favorite subject was by cloaking it in Communist jargon, and hacks who knew that they could get through any topic by reciting clichés about class, bourgeois society, and the inevitable triumph of Communism.

There’s still enough academic freedom that the racialist hacks inevitably fall into the latter category. They don’t know anything about the subjects they’re stomping over and they don’t remotely care. And anyone objecting to the jackboots on the folio will be accused of white privilege, fragility, and racism.

And so, the Folger Shakespeare Library, or its name, currently being used by institution with all the intellectual credibility of a Communist academic explaining that Hamlet was an indictment of capitalism, presented, “The Sound of Whiteness, or Teaching Shakespeare’s ‘Other ‘Race Plays’ in Five Acts.”

One of the two participants in this farce, Jennifer Lynn Stoever is a white woman who writes about hip-hop, and the other, David Sterling Brown, is a Shakespeare critical race studies scholar, who apparently insists that Cleopatra is black and accuses Antony of racism. If you know anything about Greek and Roman history, you officially know more than Dr. David Sterling Brown.

A summary of Brown’s lecture includes nonsense like, “Caesar taking advantage of Cleopatra’s black body for profit” and Cleopatra committing suicide to reject “the white supremacy of Caesar”.

Brown also denounces the bigotry of Shakespeare critics who failed to hear the “canonization of sexual violence against black men” in the Merchant of Venice. That one might have made even Shakespeare scratch his head since Brown is referring to the Prince of Morocco, the ruler of an Arab country who is described as “tawny”, and whose sexual violence consists of being rejected by Portia. Like all her suitors.

But in Soviet Shakespeare studies, you didn’t need to know anything except that Communism was good and America was evil, in its modern academic counterpart all you have to know is that whiteness is evil and blackness is good, and everything and anything consists of the former oppressing the latter.

Critical race studies in Shakespeare just consists of inventing black characters and their oppression. Paint over Arab and Greek characters as black and the rest of the sophomoric dualism all but writes itself.

Emily Folger, a Shakespeare scholar in her own right, and the wife of the Folger Library’s founder, who helped subsidize the building, described the Bard as “one of the wells from which we Americans draw our national thought, our faith and our hope.”

But the Folger Library now aims to teach Americans despair.

The Folger Library’s Shakespeare Quarterly, once a good source for scholarly material, is now filled with identity politics detritus like “Aaron, Othello, and Renaissance Refashionings of Race”, and “Beauty and the Beast of Whiteness: Teaching Race and Gender”.

The latter includes a sentence that insists, “we must help initiate discussions of race and whiteness, especially in Renaissance classrooms, where students may least expect it.”

The dawn of the computer age gave us the term GIGO or Garbage In, Garbage Out. The premise of GIGO was that the process was good, but the material was flawed. Social justice academia reverses the equation. The material may be good as gold, but it always comes out as garbage on the other end because the process is fundamentally bad and all it does is turn everything into bad copies of itself.

Academia has become a system for feeding anything from the body of human knowledge into an idiot fax machine that turns it into racial dualism. The process isn’t analytical, it is, ironically, colonialism.

Take one of America’s national intellectual treasures and the greatest playwright in history, and then colonize them by replacing the richness of their scholarship and ideas with the same generic cant as every other academic field, and what you have is the intellectual equivalent of McDonalds.

Critical race studies has nothing to say about anything outside itself. Its meta-analysis is really an echo chamber and the only thing its lens sees is its own reflection in the mirror. Academics turn to it, not because it might reveal new unexpected insights, but because they know exactly what they’ll get.

A critical race reading of Shakespeare isn’t daring and shocking, as its perpetrators like to pretend, it’s another tedious outpost of the franchise that has gobbled up academia, politics, and the entire culture. Once you know it’s there, it has nothing new to say. It isn’t breaking new ground, but dressing up old pieties in ruffs and hose, or spacesuits, togas, and any other costume that covers its nakedness.

Once upon a time, class readings were provocative and shocking. And then they became as exciting as a Soviet machine shop. What had once been a revolutionary idea had become a set of ossified clichés coming down the assembly line of a totalitarian system justifying its abuses with revolutionary slogans.

The Soviet elite turned to racial critiques to invigorate their political messages. Our own leftist elites likewise turn to racial radicalism every time they sense that their propaganda is growing stale.

They dress up the same old clichés in a racial message in the hope that it will buy them another year.

The Folgers had no children. They collected everything of Shakespeare that they could with the vision of building the Shakespeare Library. And, even out of the ashes of the Depression, it rose. And now, fell.

The Folger Shakespeare Library no longer has anything to say about Shakespeare, but many of the same things to say about race and leftist politics. It offers the same clichés that countless institutions in its vicinity and around the country have on tap at every level making it hopelessly redundant.

An institution about the world’s greatest playwright has a reason to exist, but yet another social justice outpost with Shakespeare’s name on it, a dead white man who must be denounced as a racist, doesn’t. The Folger Shakespeare Library’s lighted fools strut and fret, telling their ideological idiocy, full of sound and fury, but signifying nothing except the destruction of everything that their radical politics touch.

The End of Honor and Justice? Unless...

John Waters: "The Lockdown Through Mass Hypnosis and Entrancement"