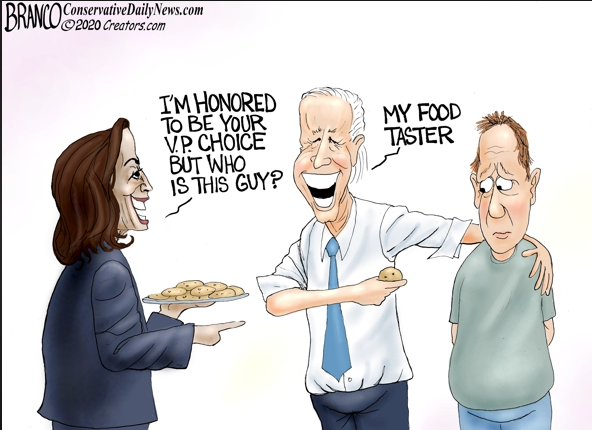 If there’s one thing we’ve learned from the Democrat Convention, and one thing may be stretching it, Blacks had better buckle up for a rough 4 years if Biden and Harris are elected.

I can say that because not one word has been mentioned about the riots, looting, and destruction taking place in cities across America. That destruction is hurting communities of color most. But these two far left progressives have zero interest in helping the minority community especially the black community.

If you doubt that statement, look not only what they haven’t said at the convention, but what they’ve done over the years.

They both support Black Lives Matter; the group, not the sentiment. The only black lives BLM cares about are the very few who are killed by white police officers. What they really care about is getting more power and money.

For example, a BLM leader claimed the recent looting and destruction in Chicago was actually REPARATIONS! So the group Biden and Harris support justify stealing and looting as reparation payments. Wonder whose keeping track to make sure each gets their fair share.

Both Biden and Harris have endorsed the idea of “redirecting” money away from police and spending it instead on social needs. Radicals and leftists think that’s great, but it will only create a South Chicago in every city and town in America that goes along. Just look at the rise in shootings and homicides each week in places like New York, LA, and Minneapolis where police budgets have been cut.

Black Lives Matter also want to do away with the police, but not because they care about black lives. Fewer police – or better yet, none – means more opportunities to sew chaos, more chances to loot and steal, and, most important, the opportunity to achieve their ultimate goal — Marxist government.

Joe Biden’s best buddy in the Senate was a leader of the KKK. Biden even spoke at his funeral. You just don’t do that if you really care about black people.

Joe Biden was against school bussing because he didn’t want his kids going to the “jungle” for school. If that isn’t racist, I have no idea what is.

Kamala Harris as Attorney General of California put away 1500 minorities for minor drug offenses even while cackling on a radio show about how she’d smoked marijuana. She hid records that proved the innocence of a black man on death row. He was executed before she “found” the records.

Biden and Harris are both for loosening border controls, decriminalizing illegal immigration, and giving more benefits like free health care to illegal immigrants. They’d allow in far more immigrants who would undercut the cost of hiring Americans for entry level jobs. Think teen unemployment is bad in the black community now? It’s going to get a whole lot worse. And those who do have jobs can expect to see their wages go down. Biden and Harris don’t care.

Both Biden and Harris oppose fracking. They’d curtail it or ban it all together and cost America our energy independence and American families millions of jobs. It would also mean far higher prices at the pump and on our utility bills – costs that hurt most those just getting started on the economic ladder.

Biden has even hinted that AOC, author of the Green New Deal Senator Harris co-sponsored, could play an important energy role in his administration. Yikes!

When it comes to education, both claim they care about the kids. It’s a lie. Their careers show they are firmly entrenched in the back pockets of teacher unions who fund their campaigns in exchange for their opposition to charter schools. If they actually cared about kids, they’d give families the chance to choose which school their children attend. Instead, they want to trap students in failing schools because they want all teachers to be union teachers and all schools to be union run.

Biden and Harris want to raise taxes by 4 trillion dollars. They say the 4 trillion dollars will be taken mostly from businesses. But guess what? When you over tax job creators, they create fewer jobs. That, of course, will hurt every American – especially, again, blacks, Hispanics, and women.

To put their tax increase in perspective, a trillion dollars would pay 16 million people $60,000 each per year with billions left over. A $4 trillion tax increase could pay more than 66 million families $60,000 per year. Then again, the other 75 million taxpayers would get stuck with the tab. But that’s not even what they’re doing. Instead, they want to take 4 trillion out of our economy and spend it on idiotic leftist programs that will kill tens of millions of jobs.

Joe Biden has been in Washington DC for almost 50 years as a US Senator and a Vice President. I defy you to name one thing he’s actually accomplished for black people. He and Obama spent 8 years mis-managing our economy, destroying our military, throwing billions away on foolish projects, ruining relationships with our allies, and kissing the rear ends of our enemies – including $150 billion to Iran, the world’s number one funder of Islamic terrorism.

So, in sum, the radical policies of Biden-Harris will make black neighborhoods less safe; kill black jobs; take away school choice for black families; increase racial conflict; and reduce the chance blacks will see higher incomes, can afford to start their own businesses, or will be able to buy their own homes.

Biden infamously told blacks that if they can’t tell the difference between him and Trump, then they’re not black. It seems to me the difference is pretty clear.

Greenfield: You Can Write Anything on the Street, as Long as it's 'Black Lives Matter'