Looking at the mindless support we are seeing for candidates supporting Socialist Marxist ideas you have to wonder what kind of education they had. I have to admit I was fortunate having gone years ago to a conservative college and having an advisor whose specialty was Europe Since 1900 and Russian History. However, sometimes personal experiences, even mild ones, can have an even greater impact.

Back in the seventies I served on a state board that required I go to our Virginia capital Richmond one a month. I stayed in the John Marshall Hotel, no longer in existence today, which was considered outstanding as a number of internationals stayed there. One week I had the fortune of being there when the hotel was filled with the Russian Olympics Track Team.

I have always been an avid autograph collector and one of my best friends at the high school where I taught was the track coach. I thought it would be a treat to get an autograph or two for him. My target was a young lady being interviewed by a Richmond newspaper reporter. I sat near them as did a heavy set man in a black overcoat waiting for the interview to end. The interview itself was interesting as the female athlete, who spoke very good English, would sometimes answer something and the man in in the dark coat would cough and she would change the subject. 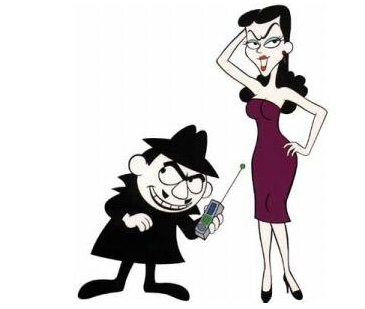 When the interview was over I went to the lady and asked for an autograph. She looked at me and then glanced at the man. He stepped between us and spoke with an accent I had to keep from smiling at because he did an excellent “Boris” accent. I recalled that from the Rocky and Bullwinkle cartoon my kids enjoyed. It was all I could do to keep from asking where Natasha was.

“What is this autograph thing?” he asked. I explained carefully not wanting him to think I was trying to get his apparent charge to sign something she should not. He grunted and then said, “Wait here, I will be right back.” He then went to another man in a dark coat and they talked for a bit. That was when I noticed that among the team members in the lobby there were several fellow like this, all in dark suits and coats. He came back to me and asked “Do you have identification?” When I reached for my billfold, which in those days I kept inside my jacket when traveling, he reached ahead of me and pulled it out. I showed him my drivers license and credit card. He nodded and then went back to the fellow he had consulted with.

The next surprise was when both of them came back and the second man, tall and thin, spoke in perfect English. “Are you German?” I assured him, “No, 100% American. The name is from a German great grandfather who came from Prussia.” He nodded and then said “If you will excuse, I would like to have your drivers license so I can call our embassy in Washington for approval.”

Good grief, I had never seen such paranoia in my life and it was making me paranoid. “Forget the request please, I have to get home shortly and will just keep my identification.” With a nod I took off. All the way driving home across the state I kept wondering about any black limos on the road that looked like they were in back of me.

The idea of Soviet Union having watchdogs over any of their citizens in another nation was I learned an attribute of a socialist society. A second occurrence a few years later convinced my family and I of that.

It was in the eighties and my family and I were in New Orleans for a conference over Thanksgiving. We had a lovely Hyatt Hotel room over looking the docks and Thanksgiving morning had a treat. At the docks a Russian freighter, Odessa, had docked to unload. It was an interesting sight and we were excited to see groups of sailors going ashore. Unusual groups.

As incredible as this may sound, for every three or four seamen there was a man in a dark coat acting like a chaperone. In the city, sight seeing, we would spot groups like this for the next two days and our kids wanted to talk to them, or at least have me do so. Kind of a ‘welcome to America’ thing.

We met one such group outside of a Marshalls Department store and I tried to initiate a conversation. The seamen smiled and said nothing letting the civilian suited member of their group be the spokesman, He did not smile and with his hand motioned for his charges to step away from us.

“What do you want with us? We have shipping business here and are taking a break. We do not talk to strangers, especially in a decadent land.” That is clearly what he said and we backed away from him without a word. The seamen behind his back shrugged, almost apologetically. Later we learned from the hotel management that officials from the Odessa had advised hotels in the area that that asylum could not be offered any crewman. I rather doubted that thinking hotel employees would adhere to that.

Now what do these two little scraps of memory have to do with what we are seeing now in the Democratic Party? For all the reading and studying as a student and as a teacher that I had done, nothing illustrated more to me what living under Marxism must be like.
We have a Democrat Party that has done more than just go left. It supports policies that would destroy our nation and turn us into a worst nightmare than fiction writers like George Orwell or Aldous Huxley wrote about years ago. What may have been considered science fiction today is slowly becoming societal fact. During the Muslim and LBTQ portion of the Democrat National Convention, when the pledge to the flag was given the phrase “under God” was removed. While I do mot think Americans who consider themselves Democrats are Godless, certainly the abortion supporting, gun removal, tax raising leaders of the party are a far cry from what out nation stands for. I for one know how I must vote in November as I don’t want a future Boris and Natasha watching my every move.
Share
Facebook Twitter Pinterest Reddit Share via Email Print

Dem Congresswoman Calls For More Civil Unrest: America, We Have A Problem.

Emery McClendon: The Bright Side of the Republican National Convention