Nearly every #BlackLivesMatter “BLM” protest that emerged in the wake of George Floyd’s death had a common demand to “defund” the police and today months later these anarchists are rioting and destroying America city by city. As easy as it may sound when reduced to slogans and words, this action, if allowed to materialize, would have consequences that spell nothing short of the collapse of society for the entire nation, one community at a 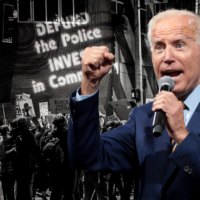 time. The most zealotic of these demands even call for the dissolution of the entire police force.

Public discontent is rising and while their attention turns, politics and politicians are moving on pushing a narrative and using public resources to change the social framework and police reform efforts weaken. As an industry, law enforcement is supposed to prevent and address abuses of power with transparency and integrity. Law enforcement knowledge and experience is just not enough in today’s capitalist society as a revolution is being waged by those in power willing to promote and change the social order with the new culture of marxism.

The entire American policing needs transformation, not just individual local city and state, if implemented and carried out in the right way, benefits each one of us – ‘right way’ being the key term here in a new shift in a culture war similar to the “silent majority” that helped President Trump to win the White House.  However, anarchists and politicians have hijacked the movement and not in a good way. When encountered with problematic bad behavior you don’t discard it all together when there is the hope of a change; when there is hope that a few reforms can go a long way in preventing further damages from taking shape. It’d be erroneous if, despite a less painful alternative, we decide to go the hard way and drag ourselves into a deep abyss of anarchy. This is why police reforms, and not dissolution, is important. In advocating for a complete scale-down in terms of funding, the discourse is being taken away from the original point of concern. Let us not overlook the good in policing. Moving beyond the larger appeal that calls for ‘defunding’ the force may hold what we need to address the real elephant in this room.

If the funds are cut down from the police force, it would be no surprise if the personnel and equipment are retained, and the community programs turn dormant. The cadet programs or ‘Explorer’ which seeks to enable collaboration between the youth and the police for facilitating community service would suffer from a reduced influx of funds. These programs which aim at elevating the standards of living, extending support to the youth, contributing to personal development, will be most affected. They are crucial to constructive interactions between the force and the community. If anything, a defunding also means a larger bridge between the state and its people.

The service offered by the police is much needed to check on violence and crimes in our neighborhoods, and our communities– it is needed to secure the nation’s integrity. You simply cannot dismiss the necessity of policing. For those aiming to destabilize the nation and drive it down the road of anarchy and chaos, streets without a force to protect may be the ideal world or their ‘utopia’. The BLM activists, claiming to be Marxists by all right, are feeding further into the aesthetic rhetoric that an unpoliced world promises. The new age of protests, rooted in anti-establishment sentiments propagated by shrewd politics, walks on the faint line that lies in proximity to the propagandization of our youth. We need to pay close attention to the agenda that underlies the clamoring for a structural breakdown of the entire system.

What needs to be done? Anything but defunding serves the purpose of bettering the system of policing for good. One can perhaps devise a well-suited method of hiring. An increase in pay will also attract the deserving candidates into the service. Police academies can be transformed into well-rounded centers for development #defendpolice. These are feasible solutions.

Giving in to the narratives popularized by extreme left-leaning entities in favor of a total metamorphosis of the American system of law and order is pretty much like amputating the limb that could have been treated with an antiseptic instead. Things will undoubtedly have to change, but a fanatic turn to this transition cannot be justified or legitimized at any cost.

Bevelyn Beatty: "Reconciliation Was Served on the Cross"