Joe Biden was in a no-win position when it came to picking a running-mate. He was in big trouble no matter who he selected. He put himself in a box months ago saying his running mate would be a woman. Then, way before George Floyd’s killing and the rise of Back Lives Matter, Biden was pretty much locked into choosing a VP candidate of color.  After 4 years of almost constant allegations that Trump was a racist, they had little choice.

The qualifications we never heard Biden talk about were ability, talent, accomplishment, or temperament.

Susan Rice is a bonafide liar. She went on three Sunday morning talk shows in 2012 at the request of Clinton, Biden and Obama and 100% lied to the American people about why Islamic radicals killed 4 Americans in Libya, including the U.S. Ambassador.

But while Susan Rice’s well-known deceit would have damaged Biden’s candidacy, it does nothing to reduce his obvious affection for her. Should Biden win, there’s little question she’ll end up his Secretary of State or in another cabinet level position as he works to put the Obama band back together again.

Congresswoman Karen Bass of California was also talked about until it was revealed she hauled a truck load of baggage. Revelations of her fan-girl statements about Fidel Castro and other Marxists could have been tough to explain to Democrat moderates – to the extent any are left.

Next on the list was the Dictator-in-Chief of Michigan who showed her stripes during the Chinese virus when she shut down gun stores, banned gardening, and imposed mandatory lockdowns that forbid Michiganders of traveling on the weekend. That didn’t stop her own family from vacationing at their summer home. For Governor Whitmer, “rules are for the little people.” Says much about Biden that it wasn’t her hypocrisy, but her ethnicity, that doomed Whitmer’s chances.

The mayor of Atlanta, Keisha Bottoms, also made the list for a while, until revelations of her connections to the former mayor of Atlanta, under possible investigation for taking millions in bribes, might cast a pall on her potential candidacy. One positive note for Mayor Bottoms was that she stopped the riots in her city pretty quickly after a young 8 year old was killed by “protesters.” Again, it says a lot about Biden that what was good for Atlanta’s people, was considered poor form by Biden who decided her commitment to order might turn off the base.

Then there was Liz Warren. She was discarded for three reasons: she’d appropriated a native American heritage that wasn’t her’s; she is a vocal advocate of a near-Marxist brand of the People’s Republic of America, and she is white. 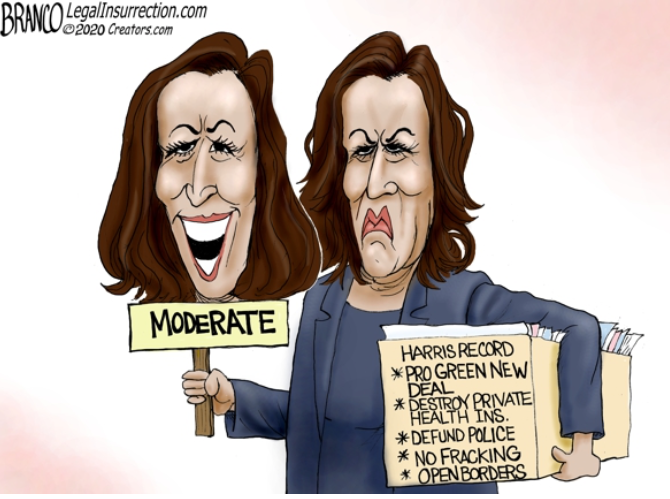 That left Kamala Harris as the least objectionable option. The Biden team are hoping their progressive base dosen’t notice that Harris’ family never actually suffered from American slavery. Harris’ mother comes from India, her father from Jamaica. More important to the Biden team, Harris pretty much lacks any closely held principles that might inhibit her from saying whatever she’s told to say to win.

In retrospect, the choice of Kamala Harris was probably inevitable and obvious despite the fact she’s rated the most liberal progressive in the U.S. Senate – even left of Bernie Sanders.

First, she opposes spending on our national security. She wants to take money from defense, from border enforcement, and from law enforcement. Like Joe, she wants to “redirect” that money to more entitlement programs. And, like Joe, Harris doesn’t see China, Russia, or Iran as particularly bad actors who would love nothing more than to destroy the U.S.A. Apparently, being soft in the face of such threats is OK with Biden and Harris.

Second, both Harris and Biden, want to eliminate fossil fuel as our energy source. In fact, Biden has released an AOC inspired version of the Green New Deal that will decimate America’s energy independence. Biden’s plan calls for trillions in new spending to make all new, and many existing, buildings, busses, and cars emission free.

Next, both Biden and Harris have endorsed gun confiscation programs. Harris has said she supports forced gun buy-back programs. That’s right, she intends to use police with guns to force you to give up your gun. Biden announced he’ll appoint Beto O’Rourke as gun czar. O’Rourk didn’t even bother with the buy-back part of gun confiscation. He announced we should just take people’s guns … again, at gun point.

Apparently, they are perfectly happy using guns to get what they want and aren’t actually against guns, but they are against their political opponents owning them.

Fourth, they both want to loosen immigration restrictions and decriminalize illegal border crossings. They want to defund the border wall President Trump is building. And they want to open immigration to millions more Muslims. You can see how well Ilhan Omar has assimilated – she openly advocates replacing free markets with socialist control. Biden and Harris have even supported the idea that public schools should teach the fundamentals of Islam. No Christianity, just Islam.

But just as worrisome is their utter hypocrisy. Harris was about as rude as a human can be to another when Judge Kavanaugh appeared before her committee during confirmation hearings. Harris refused to believe anything he said. Back then, she said the woman must always be believed. She said a woman’s accusations against Brett Kavanaugh were reason enough to disqualify him from serving. But she doesn’t hold Biden to the same standard. In fact, during the primaries she said she believed the woman. Now, she’s perfectly happy to partner with him on the Democrat ticket. It’s hypocrisy and it’s repulsive.

Expect Harris to be Joe’s pit bull during the campaign, no offense meant to pit bulls. I’m guessing as well we’ll see much more of Harris than we do of Joe.  They’ll do anything to prevent Biden’s word salads on the air. In fact, it’s been months since Biden has answered questions in anything resembling an actual press conference.

But make no mistake, Harris is a far left radical. As mentioned, she rated even further left than Bernie in the Senate. Harris stands solidly against what most Americans believe and want. Hopefully, the Biden-Harris campaign will come out of the basement long enough for America to see the truth before election day.

Greenfield: What Do Joe Biden and Kamala Harris Have in Common? Sexual Harassment