I think President Trump and the GOP made a pretty good case during last week’s RNC that this election is about our safety. It is about order versus anarchy. Do we want to live in a country that not only promotes and encourages terrorism but also legalizes it?

Eliminates the mandatory minimum term of confinement for an assault and battery committed against a judge; magistrate; law-enforcement officer; correctional officer; person directly involved in the care, treatment, or supervision of inmates; firefighter; or volunteer firefighter or any emergency medical services personnel and provides that such crime can no longer be committed as a simple assault and must result in a bodily injury.

Currently, if one is found guilty of assaulting a law enforcement official in Virginia it is a Class 6 Felony (the least serious felony in Virginia) and it carries a mandatory minimum 6-month jail sentence and a maximum 5-year jail prison sentence. You can also be fined up to $2,500.

That sounds quite reasonable to me. Do we really want people attacking police officers? Even if the officer is in the wrong, there is such thing as due process in this country. Even if a police officer catches you doing 120 MPH in a 35 MPH zone, you have the right to contest the charges and demand a trial. Certainly, if the issue is a little less clear (getting a speeding ticket for going 60 MPH in a 55 MPH zone) you have a good chance of prevailing at trial. 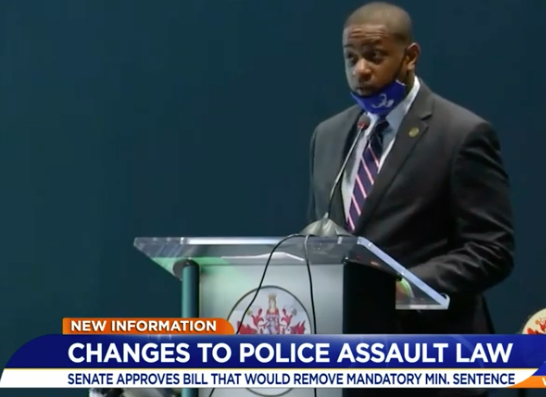 The absolute last thing we need in this country are laws that make the assault of a police officer a misdemeanor offense provided that said official is not hurt. What are they thinking in Virginia? Have they lost all common sense?

Imagine the following situation: You are speeding and suddenly you hear a siren and see flashing lights behind you. Feeling that you are being singled out for speeding when everyone else is getting away with it, you naturally feel angry. So, as the officer approaches the car, you decide instead of letting them write the ticket, you are going shove them in front of everyone to demonstrate your anger and disrespect. In these insane times, you will probably have people passing by who honk their horns in support of such behavior. Nevertheless, after the shove, the officer writes the speeding ticket and now adds assaulting a police officer to the charges.

By all rights you should be doing at the very least, 6 months of jailtime, but now it’s only a misdemeanor. No big deal. Its ok to let out your aggression on law enforcement…as long as you don’t hurt them too bad. What even qualifies as bodily injury in Virginia? If you shove the officer down and they have scrapes and bruises, is that ok or do you have to actually break one of their limbs (or worse) for it to be a felony? Is it ok to punch an officer provided that you can’t punch very hard? Technically speaking, if an officer is wearing a bullet proof vest that stops a bullet, are you only charged with a misdemeanor if the officer isn’t seriously hurt? What if the officer is facing half a dozen people? Are all of them entitled to a free shove or punch under Virginia law?

I’m not a lawyer. I don’t know all the nuances of the law. I’m looking at this new bill strictly from the standpoint of a lay person. If, as a law-abiding citizen, I’m pondering such ridiculous scenarios, then certainly people who are inclined to break the law will consider them as well.

Law enforcement officials aren’t wimps, so a shove is highly unlikely to result in bodily injury. So, guess what? In Virginia, the legislature is saying you can shove, push, or commit any variety of aggressive acts towards police and as long as they aren’t hurt, its treated as a misdemeanor. You are no worse than someone who got caught for jaywalking.

Both Houses of Virginia’s legislature are controlled by radical Democrats. This abomination of a law passed in Virginia’s Senate by a vote of 21-15 with 4 abstentions. All those who voted in favor of the Bill were Democrats and all those who voted against it were Republicans. Next the Bill will go to the House of Delegates which is comprised of 55 Democrats and 45 Republicans. Barring an Act of God, the final bill will then go to Democrat Governor Ralph Northam who will undoubtedly sign it into law.

I’m sure Virginia won’t be the only legislature enacting such laws. The Democrats are declaring open season on the police and are doing everything in their power to break down the rule of law in this country. Joe Biden is right there leading the charge. If he is elected, we will see chaos in this country that hasn’t been seen since the Reconstruction era in the South after the Civil War. God-fearing citizens in this country, both black and white, will be living in constant terror, knowing that the peace and security of their cities and neighborhoods depends on a police officer not shooting a person of color (justified or otherwise). The peace is that fragile. The absolute last thing anyone should be encouraging is aggression towards the police. Those who proudly wear the uniform are not people with a death wish. Like all human beings they are born with self-preservation instincts.

The mainstream media has accused President Trump of fear mongering…as though he were warning us of some imaginary danger that doesn’t clearly exist. However, anyone with a brain can see that our nation is in grave peril. The Civil Rights marches of the 1960’s had a purpose and they were led by a responsible leader in Martin Luther King, Jr. Black Lives Matter has no purpose other than anarchy. It isn’t about racial equality, its about finding an excuse to create destruction, because the leftists of this country would rather see our great Nation burned to the ground than to see Donald Trump succeed as President.

Why? Seeing Donald Trump succeed means they are losing control. Its bigger than Donald Trump the person. Its about what Donald Trump represents. Trump represents the voices of Americans who are tired of seeing this Country trashed by Democratic policies. They are tired of the establishment elite calling all the shots. An entire mainstream media mechanism and a billion dollars was put into the 2016 Clinton campaign and they got beat by a man who spoke to the people…a man who reminded us what makes America great…a man who made us feel patriotic once again.

The 2020 elections aren’t about the candidates, its about who gets to control this country. Trump put the power back into the hands of the people. God help us all if the people don’t vote to keep him in the White House another 4 years.

It is Time to March For Faith

The Future Is Looking Bright for The GOP