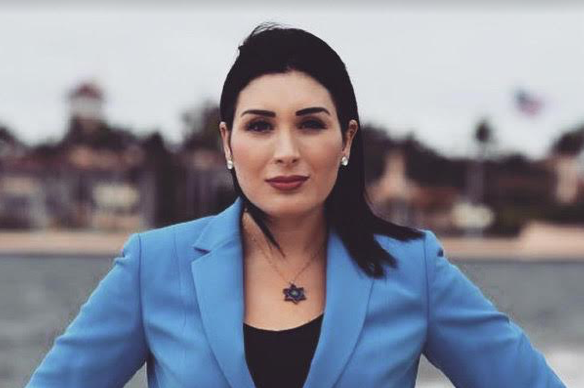 A Jewish warrior is looming large in President Trump’s home district in Florida.

Laura Loomer came striding into the political arena because she is concerned at the American drift to a place she rebels against. She decided to take a stand. In fact, she has taken several stands as an angry individual who has attracted media attention.

Loomer was angry at the staged assassination of President Trump in a Central Park leftist adaption of Shakespeare’s Julius Caesar in which the Roman emperor was replaced by a lifelike Donald Trump. The bloody mock assassination of Trump on stage incensed Laura Loomer.

American presidential assassinations are nothing new and Loomer considered this public presentation an incitement, giving license to murder Trump, so she protested the event by leaping onto the stage and interrupting the production to much media acclaim.

Like too many conservative voices, Loomer has been banned from social media including Twitter, Facebook and Instagram for pointing out Ilhan Omar’s anti-Israel and anti-Semitic slanders which Loomer rightly claims emanate from Omar’s personal background as an Islamist. I have written extensively about this in the past. Facts are on Loomer’s side, despite the ban.

Loomer is “the most banned woman in the world,” having been banned on every social media site for exposing gross examples of anti-Semitism.

Not being a supine quitter, in 2018, after being banned from Twitter, Loomer highlighted the Big Tech’s abuse of conservative opinions by chaining herself to the door of a local Twitter’s New York headquarters to protest her ban, claiming it was not hate speech.

It was the assault on conservative voices and the blocking of free speech that triggered Loomer to enter politics.

Laura Loomer has launched a bid for Congress as a Republican candidate in Florida’s 21st Congressional District of Palm Beach County where President Trump and the First Lady, Melania Trump, live.

Some try to paint Laura Loomer as a racist, but she celebrated the launch of her political campaign at a local Boca Raton diner owned by a Muslim woman who immigrated from Pakistan.

The owner, Naheed Khan, told the UK’s Daily Mail that she is a practicing Muslim and was at first concerned about why Laura Loomer had done some of the things that had made headlines, so she and her pediatrician daughter invited Loomer for a chat where no questions were off limit.

Laura and Naheed share a couple of things in common. “We’re both fighters,” Loomer told the Daily Mail. And they both agree that people who immigrate into America need to assimilate and embrace American values. This, after all, has been the hallmark behind America’s successful history of immigration.

Laura Loomer is a highly charged, energetic individual with strong convictions. When she sees an injustice she acts on it, instinctively.

As with the Shakespeare incident, she felt that the cultural theft of a character to forge a false and biased allegory for political purposes was sufficient for her to perform her own drama to show the audience and a wider public the ultimate danger of the fake misrepresentation of the President leading to a conclusion that murder is the ultimate outcome to save Rome.

We see the current violence on American streets, the anarchy and the destruction, as a real life enactment of what had been presented on a Central Park stage. Laura Loomer is a rarity, a woman who is prepared to act and speak out against the anarchy by calling it for what it is.

It left her little option, as an American woman and a Jew who cares, but to take to the political stage.

This is a risky thing to do as America lurches to the intolerant left and counter voices are silenced, even physically attacked.

But Laura Loomer is a fighter. If you didn’t know her you’d think she was an Israeli. She has the spunk of an Israeli taking on forces larger and stronger than herself. And Israel is an issue she feels strongly about, not only because she is Jewish but because she sees the injustices being perpetrated against Israel by prominent members of the Democratic Party, and she is prepared to go to war against them both in public and in Congress.

27-year-old, Laura Loomer, plans to unseat the four-term Democrat incumbent, Lois Frankel, in Florida’s 21st District in order to become the youngest Representative ever elected to the United States Congress.

The Democrat Party has been trending downward in its position on Israel as radical new anti-Israel members replace Democrat elders and Israel fades as flavor of the year in that party. Elliot Engel was the latest Jewish Establishment figure to fall to the new breed of radical Democrat lawmakers. Democrat veterans are loath to be seen publicly supporting Israel. They think it would come at a political or career cost. That’s how far left the party has drifted. That is why Lois Frankel, Loomer’s opponent, who also happens to be Jewish, did not come to Israel for the historic opening of the US Embassy in Jerusalem.

Loomer, on the other hand, did travel to Israel for the opening of the embassy.

Despite Florida’s 21st District being strongly Democrat, there is an unsettling political wind blowing from the far left across America, bringing with it a destructive storm that should worry middle class and wealthy voters, particularly Jewish voters, who are the core of the 21st District constituents.

Frankel voted with the majority against BDS attempts to boycott Israel, but sixteen of her party’s members actively promoted this anti-Israel legislation which is bound to rapidly reappear should the Democrats take power. It won’t be the Frankel’s that will dictate policy. It will be the Omars and the Tlaibs in control. Win or lose, it is certain that the number of Democrat radicals will multiply as an inevitable outcome of the 2020 elections.

This is certain based on the British experience in the Labour Party, where Palestinian flags waved at their Annual Conferences, where the issue of Palestine worked its way into the top five policies of a Labour Party drenched in the stench of anti-Semitism rising in its ranks.

Fortunately, in Britain, traditional Labour voters, many who had been in the party for 40 and 50 years, could not take the Corbyn-led party any longer. They walked away before the all-important Brexit election of 2019, which caused the Labour Party a timely defeat.

As early as 2017, this writer anticipated that we would see the emergence and spread of this Socialist anti-Semitic poison metastasize in the American Democrat Party, and it will fester and grow if left unchecked and unchallenged. This has happened far more rapidly than I predicted.

With the radical shift in the ideology of the Democrat Party, politicians like Frankel are becoming increasingly tepid in their approach to Israel, and all too silent in criticism of the anti-Jewish rhetoric within her party. Laura Loomer will be far more affirmative.

Despite being a political newcomer and outside candidate, Loomer has attracted influential groups such as JEXIT and United West to her cause.

She has also raised more campaign donations than all her rivals combined, including Frankel. Since launching her bid for Congress one year ago, Laura |Loomer has raised over one million dollars.

Should she win her primary on August 18, she will be a formidable rival for Frankel. Loomer will have the wind at her back with an increasing number of traditional Democrat voters feeling as if their party has left them. She will almost certainly have the personal backing of the President and his family as Trump’s Florida resort home, Mar-a-Largo, is located in Loomer’s district. She will also attract the support of Ron De Santas, perhaps the most popular state governor in America.

Israel will be watching Loomer’s battle with interest. We need more affirmative pro-Israel representatives in Congress as Israel and America face many challenges after the 2020 elections, because a Biden presidency is not to be trusted.

Laura Loomer is certainly a young politician who will shake things up in Congress for the voters of Palm Beach County.

Barry Shaw is the International Diplomacy Director at the Israel Institute for Strategic Studies. He is an author, writer and speaker on Israel and global strategic issues.

Greenfield: Billions Are Being Spent on Teachers Who Won't Teach: Pres. Trump Can Change That