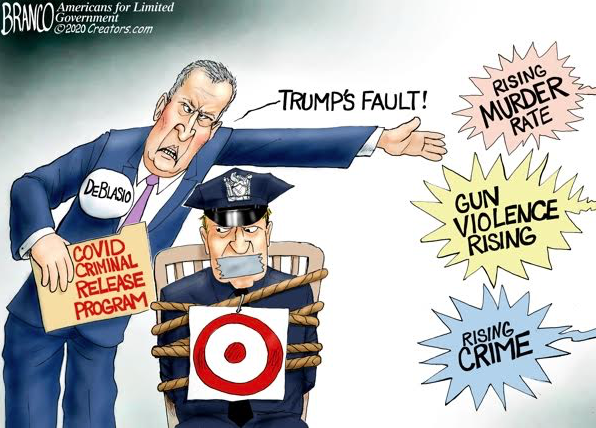 The media never misses a chance to report injustice when it involves a white cop and a black victim. They’re loath, however, to touch the story if it’s a black assailant and white victim.

The thug who shoved a 92 year old woman into a fire hydrant in New York City a while back got almost no coverage. He was black. He had been arrested more than 100 times. But Mayor de Blasio thinks requiring the criminals to pay bail falls too heavily on minorities so he and his council have done away with it. Since he hasn’t spoken of the incident, de Blasio probably doesn’t think his new bail rule falls too heavily on 92 year old women shoved into fire hydrants. Or any of the other increasing number of victims as crime in NYC skyrockets.

Corporate America is now bending the knee to Black Lives Matter, the group and not just the exclamation. Does any rational American believe black lives don’t matter? But the leaders of the organization want to use the idea to hide their real goals. They are Marxists. Ironically, they want the companies trying to buy them off extinguished.

The companies only want to buy inoculation from BLM’s allegations of racism. It won’t work. BLM’s leaders will take their money and still advocate for their elimination. That’s how Marxism works. It’s fundamental to the philosophy.

The networks have cancelled two reality shows about police. Why? Well, the current cultural gate keepers have demanded it because the shows depict cops serving and protecting people. The shows graphically illustrate the fact that 99% of cops are good and responsible. We can’t have that right now. It’s inconsistent with the narrative that all cops are evil and racist.

Pepsi Cola, which owns the iconic Aunt Jemima brand, have agreed to ditch the brand and change the name. Why? Well, Black Lives Matter demands it. No matter that hundreds of millions of Americans – black and white – grew up with the syrup and pancake mix. No longer will parents use the Aunt Jemima syrup bottle on the breakfast table as a teachable opportunity about a period of American history.

BLM disdains America’s history. A clear understanding of our history would argue against their goal to destroy America’s cultural and economic traditions and promote a socialist system.

Don’t believe the narrative that BLM, and their allies, ANTIFA, want to do away with statues and memorials because they honor racists. That’s not it. Yes, some of the confederate memorials now under attack were erected to honor those who fought against the union, and for slavery in the south. So what? That war is part of our history, an ugly and difficult part to be sure, but a critically important chapter of America’s history we should learn from.

That though doesn’t explain why they want to destroy memorials to Lincoln, Grant, Jefferson, and Washington. Those men didn’t fight against America, they created it. And they didn’t fight against equal rights or the dignity of every life; they celebrated those ideas. That they didn’t achieve the goal doesn’t negate the fact they were the first in history to form a nation that aimed at them.

It’s more than a bad idea to deny our history, good or bad. Removing every confederate name removes a chance for future generations to know their heritage, what the Democrat controlled KKK meant to previous generations, or how a brave, tall, and not very good looking Republican named Lincoln gave his life to end slavery in this country. The country that denies it’s history, consigns itself to a future of ignorance and mean stupidity.

The radicals offer plenty of examples of such ignorance. Have you seen the videos of BLM and ANTIFA blocking roads to stop people from reaching their destinations? When the drivers nudge forward, the rioters are enraged someone would disobey them. It’s the definition of tyranny. Then the thugs attack the drivers, smashing windows trying to haul out the individuals so they can beat the hell out of them.

In one instance, the driver had a gun and used it in self defense against an protester who approached his vehicle pointing a rifle at him. The driver shot the armed rioter, and now the driver is under investigation. In another instance, a driver shot a rioter who was trying to break through his window to get to him. The rioter, once shot, laid in the street demanding those around him get the license number as though he was the one who’d been wronged. PLEASE!

It is always easy to see tyranny in others. It’s harder to stand against it. But the United States has consistently done so. We fought two world wars. We stood against Nazis in Germany, Communists in Russia, and Maoists in China. We’ve fought countless battles in dozens of far away places, from Vietnam to Afghanistan.

What’s nearly impossible to do is to see the tyranny in your own society, or group, or committee. ANTIFA and BLM can’t see it. The folks at CHOP couldn’t see it. And the rioters in Portland can’t see it. Hell, the mayor of Portland can’t see it. Most countries certainly don’t see it. In America, we’ve not just seen our own tyranny and injustice, we’ve fought over and over to correct those things. And we’ve made tremendous progress.

Now BLM, ANTIFA, and all the other left wing radicals in America want to do away with the police, the rule of law, the “system.” They’re demanding nothing short of free reign to promote injustice and inequality. But deadly chaos has never produced a better society.

All violence has ever done is produce societies that weren’t worth saving. Make no mistake, a clear reading of history assures that’s exactly where we’re headed if this insanity isn’t stopped soon.