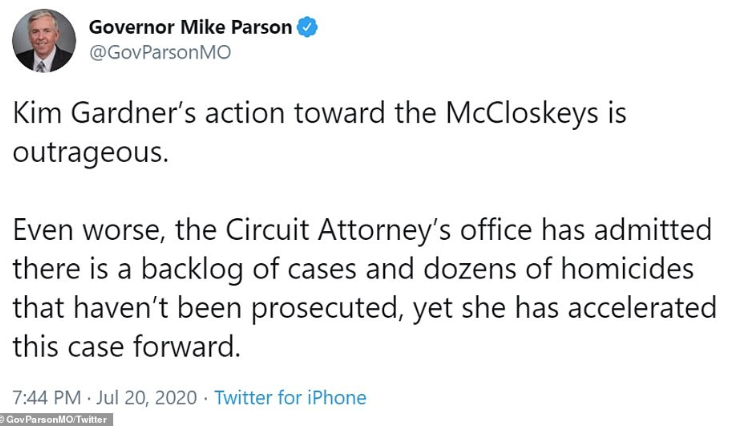 It’s time to cling to your own guns ever tighter because on Monday, July 20, 2020, the left finally came for legal gun owner’s guns.

In St. Louis, Circuit Attorney Kim Gardner has filed charges against Mark and Patricia McCloskey, the couple who were made famous when they were filmed outside of their homes holding their legal firearms in response to a mob of people who stormed onto their private street. The couple was charged with the unlawful use of a weapon which, is a class E felony that carries with it the possibility of four years in prison and a $10,000 fine. Every single legal gun owner who believes in the right to protect yourself and your family from marauding mobs who storm onto your street needs to pay attention. If this wrongful prosecution succeeds, your guns are next.

For the benefit of those who may not know the whole story, the McCloskey’s live in a gated community on a street that leads to the mayor of St. Louis’s residence. A mob of protestors broke down a gate that was locked and accessed the private street. Mr. McCloskey’s story contends that they felt in harms way, were threatened, and ultimately had their firearms brandished at the protestors in order to deter violence and keep themselves safe. Protestor’s caught this event on tape and as such, the attention seems to have activated a left-wing prosecutor in St. Louis.

In Missouri, the legal principle of the “castle doctrine” is quite clear: When someone intrudes on your property, you as a resident are able to use force against the intruders, with no duty on your behalf to retreat or stand down. While case law would not fully protect a resident who used deadly force in a case where deadly force was not required, that narrow situation does not apply to the McCloskey case because they did not use any force aside from brandishing their legally owned and possessed firearms as a deterrent.

While it is clear the McCloskey’s did not utilize their weapons, as they very well may have if they felt truly at harm, they are still being charged with an E felony for simply brandishing their weapons to deter violence from people who just broke onto they street.

Prosecutor Gardner seems to believe that this action was meant to quench the right of the people to “peacefully protest,” a statement that is so completely silly one cannot understand how an attorney can make such a statement.

Clearly, peaceful protest, particularly in public spaces is protected speech. When a protest turns violent, it leaves first amendment protected speech zone and now becomes something quite different. In the present case, the “protestors” started out with violence by breaking down the locked gate to the private street that the McCloskey’s home sits on. Said criminal activity, trespass, certainly would not cause for the “protests” to be labeled peaceful and furthermore, a person brandishing a gun on their own property in response the trespass is lawful, particularly where the most aggressive “force” utilized was brandishing the weapon(s) as was the case here.

Many on the left would like to paint the McCloskeys’, two personal injury lawyers by trade, as wild gun owners bent on quenching speech. That characterization could not be further from the truth and is another example of the left being bent on character assassination in order to win a debate around guns. These people had their private street broken into and were legally protecting their property from trespassers.

There is little chance that the Circuit Attorney Gardner will take this case to trial. She seems to be another wildly activist left-wing prosecutor trying her hardest to make a name for herself around a controversial issue, here legal gun owners protecting their property. One may argue correctly that if she does continue on this path, she should be prepared for charges of prosecutorial misconduct and potential further legal action. While one would hope she decides that this case is in fact not the one to make her name on, it does not seem likely it will be dropped any time soon.

The moral of the story kids is that you, yes you, as a legal gun owner protecting your own property from a mob are not safe from the long arm of the law. The left is bent on taking your guns away from you anytime and in any way so, beware, your guns could be next.

Bryson Gray: Why I Left the Left