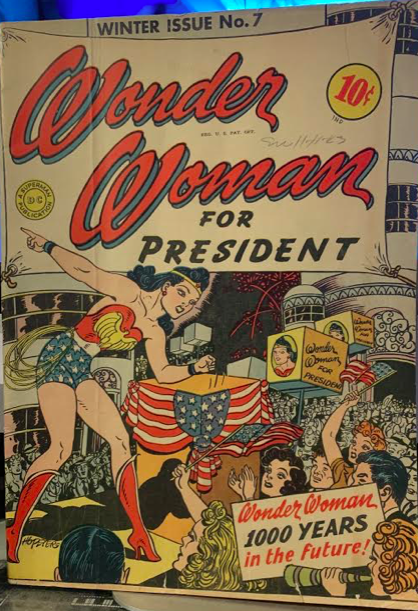 I had not given much thought to the comic book heroine Wonder Woman for some time though I had been a fan of the TV series that starred Lynda Carter and enjoyed the excellent portrayal by Gal Gadot in three films. What called her to mind was the discovery of an old comic book I had Wonder Woman No. 7 dated back to 1942. In mint condition Carolyn had purchased it for me at a comic book show for $25. in 1976. I was shocked to find just today value wise it is at last $5,000. We older folks can all think back to the comics that we had as kids that were thrown out that combined would now be worth millions. Remembering that I had to reflect on how Wonder Woman came about and what others have tried to do with that image.

Wonder Woman was created for DC Comics by William Moulton Marston, an American psychologist who wrote under the pen name Charles Moulton. A brilliant scientist, he and his wife Elizabeth invented an early prototype of the lie detector. An artist and writer he and his wife were aware of the great popularity of DC Comic stars Superman and Batman. Both Dr. Marston and his wife felt there was a need for a female super heroine who could be the model for young girls. That alone was not enough. Wonder Woman was created at a time of World War Two upheaval and Marston was Jewish. He was well aware of how the Nazis hated and wanted to kill all Jews. The original Wonder Woman was not a giant female Super Woman, In appearance she was an average height Jewish girl. What was most intimidating for Nazis who followed even our comic books was to have this Jewish girl take down and defeat the best they could throw against her.

What was also significant about Wonder Woman that despite winning the right to vote earlier in the twentieth century there was a glass ceiling for most women that remained until World War Two which saw a number of women taking roles left empty by men called to service. We think of images of Rosie the Riveter, a young woman flexing her muscles. Truly a Wonder Woman image.

For most young women there were only three major fields available which were being a nurse, a secretary or a teacher. Our colleges, especially for women kept that tradition into the fifties as my wife Carolyn found in an all girls college she went to, now a coed University. There was emphasis on being a lady and each student had a handbook with the following requirements.

Times have changed in many ways for women and there have been changes to the Wonder Woman image. For a while there were feminists, with the agreement of DC Comics, in the seventies who tried to make Wonder Woman the symbol of female supremacy not just equal to men. This did not quite jive in media interpretations. In the 1970s Wonder Woman starring Lynda Carter was very popular and in many ways harkened back to the days of the original comic book fighting Nazis and all. 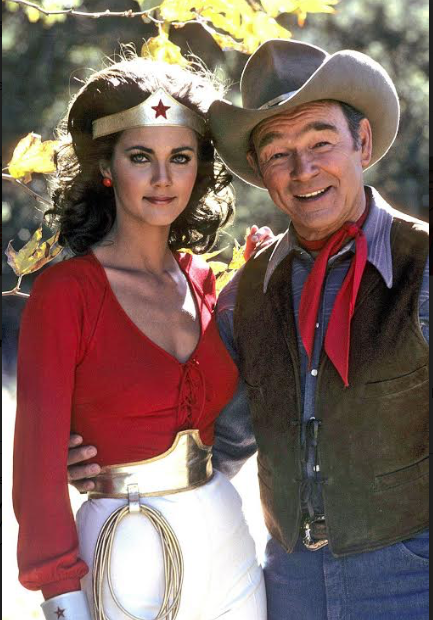 At the time of the show I sponsored our high school newspaper and I was able to secure an interview with Lynda that was piped over the intercom to the class. Students on the school paper staff asked direct questions and she was very direct in her answers. She admitted the show had messages and told us, “The success of Star Trek has been our guide. We want to speak directly to the needs of the day and our democracy is most important.” We found she was a strong Christian who got in trouble at times for circulating Bible tracts. And she was a Republican. Very sensitive to others in one episode, “The Bushwhackers,” Roy Rogers was the guest star. Knowing his values she willingly exchanged her glitzy patriotic outfit for a more Western style which cowboy legend Roy would appreciate.

The most recent Wonder Woman in film, Gal Gadot, was an even bigger letdown to leftists. A former veteran in the Israeli army she refused to get an abortion during the filming of the Wonder Woman film. She was pregnant during major action scenes and explained that for her abortion was a sin against God.

This does not mean that wonder women are limited to TV and film heroines as we are recognizing today that there are many women of all ages who have taken their place in life and who represent the finest as Christians and as Americans, This is, in my opinion one of the most important things being done by PolitiChicks and other groups on social media. Despite the false news media we are hearing about amazing conservative Republican women who are running for office this Fall. This could be, as Sean Hannity likes to remind us, the most important election coming up in history. The Democrat Party has become a Socialist Party and it will take top campaigning by top candidates to save our nation. We have among those candidates many amazing Wonder Women and they need and deserve our support.

An Unresolved Stalemate: Time to Ruminate