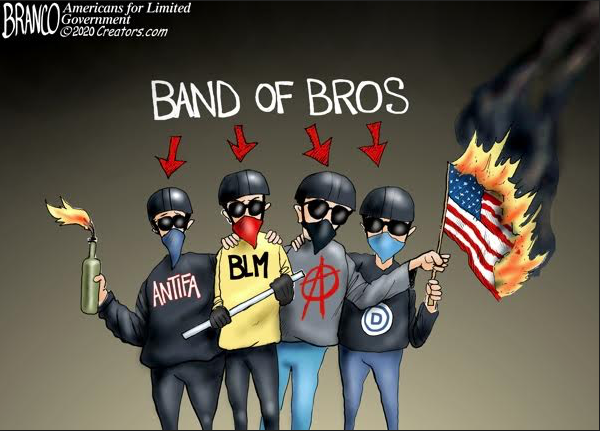 Granted, Maxine Waters is crazy and always has been. But it’s reached a new level as she pulls her SUV to the side of the road when she sees a black guy getting a ticket so she can berate and threaten a white police officer. The guy getting the ticket told her everything was fine and she ought to move her car as it was blocking traffic. What right does this racist Congresswoman Waters have to interfere with a cop just doing his job?

A middle aged husband and wife saw a crowd of protesters breaking down their gate and invading their private neighborhood. The ‘peaceful’ protestors threatened to burn down the couple’s home, and kill their dog. The husband and wife went inside, grabbed two guns, and told the mob to leave. The couple did what the police should have done, but were told by local officials not to do – protect and serve. The District Attorney, a leftist activist, has confiscated the couple’s guns and pressed charges against them. Fortunately, both Missouri’s Governor and Attorney General have weighed in against the local prosecutor on the side of the law-abiding couple. But, why in the world was that necessary? Since when do we prosecute and persecute those defending themselves from the threatening mob, and give the mob a free pass?

Videos are all over the news showing a black man reach over a fence with a cane and attack a white cop in New York. The thug was caught, but before he’d spent 5 hours in jail, he was released on Mayor de Blasio’s moronic “no bail” rule. New York was one of the first to adopt the no-bail idea, but other cities run by progressive Democrats are following suit. I’m taking bets as to whether this guy shows up for his trial. This crime was premeditated assault on a police officer and now the guy is walking around free to do it again. Someone, please tell me the logic in that.

Nancy Pelosi said recently, Donald Trump will be out of the White House one way or another. If the media were the least bit honest – as they once upon a time arguably were – someone would have asked what she meant by that. But the media lets the far left get away with saying and doing whatever they want, while every word spoken by the right is angrily examined and intentionally misconstrued.

Where is the balance, where is the fairness, where the hell did America go?

Twenty years ago, 9 Islamic terrorists stole large American passenger jets and ran them into buildings in New York and Washington DC. They killed nearly 3,000 people. If you watched the news from the Middle East back then, you’ll remember seeing people there cheering and burning American flags. Less than two decades later we have allowed well over 40,000 Muslims into our country, and made them citizens with full benefits and rights. One of those whose family came has been elected to Congress – Ilhan Omar (D-MN.)  Rashaida Tlaib (D-MI) is another Muslim member of Congress. She was born in the U.S., but her parents were Palestinian immigrants. It’s shocking, given the fact America rescued them and their families from lives marked by misery and privation, but still these two detest America, the freedom they gained by being here, and the very way of life that made their success possible. They spend every day in Congress working to take our freedom and tread on our traditions.

Chicago has several major claims to fame. They have the strongest gun control laws of just about any city in the U.S. They also have one of the most liberal – and incompetent – mayors.  The other big thing we know about Chicago is that, to the general public, no other city is more dangerous or more violent. There have been more than 12,500 homicides, assaults, and accidental shootings there since 2014 – more than the entire state of California with millions more people. As in most major cities, most of those killed are black. Most of those doing the killing are also black. Donald Trump has repeatedly offered any and every assistance Mayor Lightfoot would accept to end the shootings and killings. From the FBI to the National Guard. Mayor Lightfoot has consistently refused. Last weekend, another 55 Chicagoans were shot down, 17 died.

Where the hell did America go.

Voters in these big cities have let down the rest of the country. They’ve elected far left politicians who sound great on the campaign trail, but are disastrous in government. They are crooks and liars. They have zero management skill. Their only hope of reelection is to build corrupt machines that force large voting blocks to become beholden to them.

They clearly do not care for the people of their cities. If they did, they would not stand by, or worse, aid and abet, the rioters in their cities by allowing billions in damage, demand police departments be defunded, or allow “peaceful” protesters to take over large swaths of the city because they feel entitled to deprive others of their homes, jobs, businesses, or property.

In saner times, when America was still America, depriving others of their rights or property would have been the very definition of criminal.

Where in the hell did America go? To the bullies like BLM and ANTIFA who’s public school educations never taught them how precious America was; or the progressive weenies like Mayors de Blasio and Lightfoot who never cared, or thought holding onto their own power was more important than protecting our freedom.

Let’s take America back. Biden says, “BUILD BACK BETTER.” What he actually means is build government bigger and back people into a place where their freedom no longer exists. We had better build back what we once had, what our founders envisioned for America, and not what Joe, Bernie, AOC, Nancy, and all the other progressives want.

Building back won’t be easy, but we must do the hard work, because the liberal politicians and leftist radicals won’t stop till they get most of your money, and all of your freedom.

Greenfield: Foreign Companies are Interfering in the 2020 Presidential Election