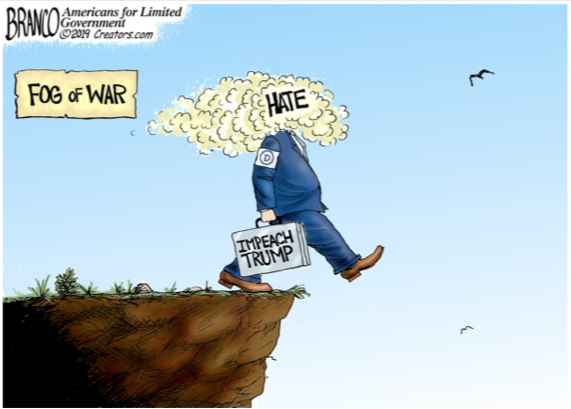 What in the world could possibly go wrong with letting convicted felons out of prison at the same time you’re defunding police departments?

It is inconceivable to me that any politician, except one from China or Russia, would think America should pursue this insanity.

The left reasons that if criminals stay locked up, they might catch the Chinese virus. Apparently, the masks they insist we wear don’t work on felons or in jails? Joe Biden seems to think releasing criminals is a fine idea. He wants criminals protected from the virus even if it makes the rest of us less safe.

As usual, the United Teachers of Los Angeles (UTLA) have nothing but kids’ best interests when it comes to restarting school this fall. They’ve demanded as a condition for opening schools the all charter schools eliminated, police departments defunded, government-run healthcare implemented, and a statewide wealth tax made law.

The UTLA also insists that before they’ll open, California must provide financial support for undocumented students and families, the federal government must bailout their pension system, and additional bail outs must come forthwith to local and state governments because the hundreds of billions already provided in previous Covid relief measures wasn’t enough. They cite as evidence the National Education Association, the largest labor union and special interest group in the U.S.

You may be forgiven for wondering what in the world any of their demands have to do with helping kids get a quality education, or be ready for college, or be prepared to meet the real world.

Imagine being a parent in Los Angeles and seeing your children deprived of an education until the state initiates a series of socialist policies you know will destroy the economy, kill jobs, and lead to a massive flood of illegal immigrants.

Then, add the fact, that even after all that, you know your children are getting a sub-standard education in a school system designed more for the employees than for the students.

It’s no surprise that teachers unions will give Democrat candidates nearly 100 million dollars this election cycle. That, and the demands by the UTLA, are just  further proof that the Democratic Party is controlled by socialists,

Why have we allowed the Democrats to hand over so much power to the teacher’s unions? They are notoriously leftist, relentless in their demands, mainly interested in amassing their own political power, and nearly worthless in teaching our children.

LA insanity doesn’t stop at the county line either.

Further north, the City of Berkley has decided that civilians will now be in charge of traffic stops. Don’t want to be delayed by pesky stop signs or tedious red lights? Ignore them. I wonder how long it will take before one of these civilian traffic controllers — or a driver — is badly hurt or killed.

When you listen to Joe Biden talk about all the jobs he is going to create, it’s ALWAYS ‘Union jobs’; it’s never just good paying American jobs. So far, it looks like unions have given the Biden campaign around 40 million dollars. The inevitable pay-off is that, if Biden wins, he’ll guarantee any project that receives federal funds will employ union members and ONLY union members. You can be sure, 97% of the political funds they give out will go to Democrats no matter what the individual members of the union may prefer.

Democrats won’t even acknowledge Trump’s successes in the first 3 years of his presidency. Instead, all they talk about is his narcism, his ego, his crudity, his various exaggerations.

Under Biden, jobs will be lost, taxes will go up, regulations will expand, the cost of living will sky rocket, freedom of speech will disappear, and our constitutional right to own guns will vanish. His energy policies will again make us dependent on foreign energy producers.

With Biden, school choice will be history, jobs will be for union members, police will be replaced by thugs from Black Lives Matter — whose leaders have publicly stated that white people are sub-human.

Joe Biden has teamed with Bernie Sanders and AOC, and other members of the squad, who have said they will never accept America’s values or America’s institutions. Given Biden’s far left lurch, does anyone really believe that when he talks about “redirecting” money away from police to other causes, he’s not actually saying he supports defunding the police?

You can be 100% sure whoever Biden picks as his running mate will be just as radical as he’s become — or worse.

Donald Trump has endured one of the most difficult presidencies in history. Nancy Pelosi, Chucky Schumer, and their entire band of idiotic puppets have made it their mission in life to stop Trump at every turn.

It’s no wonder President Trump is a bit edgy. Given the persecution, deceit, and often illegal maliciousness he’s faced every day of his presidency, it’s a wonder he’s as calm and productive as he is.

Democrats don’t care about releasing criminals, or better schools, or more non-union jobs because all they care about is gaining power. Donald Trump stands in their way. As a result, they hate Trump.

Talk to them. Democrat politicians almost never mention anything positive about Biden. They don’t talk about what’s in the best interests of the American people.  If Trump’s on one side, they’re on the other. If next week he changes sides, then they change sides.

Democrats hate Trump because he stands between them and the power they desperately crave. Their hatred has made them callous and stupid. And that’s a good reason not to elect them.

Greenfield: The Minority Victims of Whitnessphobia