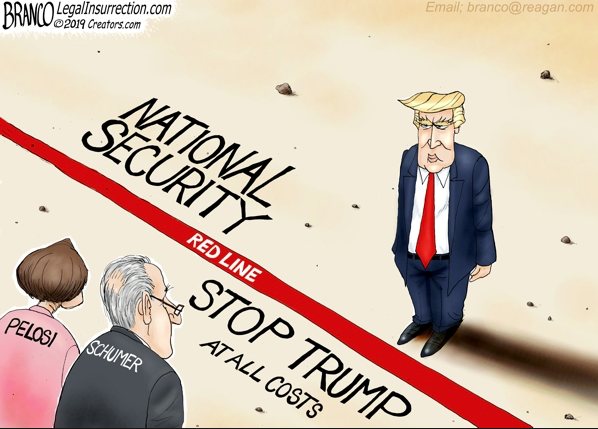 ‘Message discipline’ means politicians talk exclusively about what will achieve their goals. Message discipline itself becomes the all important imperative, whether it reflects reality or not.

The left, led mostly by the usual suspects; Nancy Pelosi, Chuck Schumer, Alexandria Ocasio-Cortez, Ilhan Omar, progressive media personalities, and a host of others have pretty much parroted the exact same message since the day Donald Trump was elected. Joe Biden is a little late to the party, but happy to reap the political benefits even if the message is terribly damaging to the country.

The message is this: Donald Trump is wrong. In every event and under every circumstance, progressives want us to believe Trump is an existential danger to America.  And progressives are ok with the message even if it ultimately destroys America – so long as they’re in charge when it all comes tumbling down.

It doesn’t matter that Trump achieved more for America’s working families than any president since Reagan.

No matter the facts, or the damage, President Trump is to be demonized.

They sucked in a huge host of accomplices: John Bolton, Trump’s niece, the Chinese Communists, the United Nations, the Russians, the Iranians, the Saudi’s, former Obama intelligence and military appointees, leftist academicians, and, of course, nearly every mainstream journalist in this country and every other.

Their tactics have varied. Their strategy never has.

Pelosi once said impeachment would hurt the nation more than Trump if it wasn’t a bi-partisan effort. A few months later, she launched a Democrat-only impeachment effort that did, indeed, hurt America more than the president. In fact, the entire impeachment fiasco distracted our leaders and media from preparing from the most dire threat in decades: a brewing global pandemic we were woefully prepared for when it hit.

Then, as Trump rallied America’s resources to fight the virus, Democrats accused him of doing everything wrong.

When he urged people to avoid large events and abide social distancing, Democrats publicly urged people to do the opposite. New York officials advocated for parades, Pelosi promoted street parties in San Francisco’s China town, progressives far and wide suggested the coronavirus was no big deal.

When Trump banned travel from China, the left reprised their favorite charge against Trump: blatant racism. Biden, who once accused Mitt Romney of wanting to put blacks “back in chains,” said the ban was clear proof of Trump’s racism.

When Trump stopped travel from Europe, he was accused of xenophobia.

Subsequently, when health care experts pointed out these travel bans saved hundreds of thousands of lives, the anti-Trumpers recruited dozens of health care “experts” to claim Trump was actually a science-denier.

When Trump held daily press briefings to update Americans about the pandemic, the left criticized him. When he stopped daily briefings, they criticized him again.

Then, just as we started to see Covid infections and deaths start to drop, George Floyd was murdered in Minneapolis. The left got a new injection of passion into their favorite anti-Trump trope. It was racism by Trump that caused Floyd’s death.

Off the left’s puppets went with new energy. ANTIFA, Black Lives Matter, the media, and every progressive politician in America erupted. Cities were burned.  800 cops were injured, 3 were killed. Thousands of small businesses were destroyed. And hundreds of innocent bystanders were assaulted.

When 6 blocks of Seattle fell under the control of radical protesters, Seattle’s Mayor suggested the occupied CHOP zone could represent a summer of love. Instead, it was weeks of destruction, rape, and assault. Only when the protesters painted graffiti on the mayor’s house did she finally order the CHOP zone cleared.

What does any of the destruction, looting, or rioting have to do with George Floyd’s death?  Very little. They have everything to do, however, with the counter-productive rage fomented by years of false Democrat allegations against Trump of racism.

You can be sure, the left will blame Trump for every American who is shot, raped, or beat up.

Still another potential consequence of the left’s false charges of racism is the backlash against the destruction and anger. That backlash runs the risk of setting back race relations by decades.

But none of the dire results of Democrat hysteria against Trump seems to matter to those who hope it will give them a political edge. Just days ago, Pelosi doubled down on her hyperbole by accusing Republicans of murder when they offered a police reform bill she thought competed against her own attempt to use police racism as a wedge issue in the November elections.

The reality is that it’s progressives – and their false narrative — who are guilty of murder. They’re killing America.

It doesn’t matter to them that the message itself is totally false. Or that it’s destroying the greatest nation in the history of the world.

They should be ashamed. The fact they’re not shows just how deeply flawed and evil they are.

Why Are Leftists in Hollywood the Only Ones Using Blackface?

The Taking Down Of America