When our U.S. president raised his Bible overhead at St. John’s Church across from the White House it was a sign -mostly an appeal to his evangelical base as our country protested and riots thundered across the United States. Christians, Faith leaders, and Conservatives remained silent, where was the Silent Majority, our Republican leaders that united around President Trump in 2016? Very few Christians answered the call.

On June 1st, “The day after the protesters set fire to St. John’s Church President Trump walked across the street to St. John’s Episcopal Church, known as the ‘Church of Presidents’, in nearby Lafayette Park. Protesters had turned the sanctified ground into a battlefield and the Church had been desecrated by those same anarchists that set fire to the church all while throwing bottles and rocks at local law enforcement that were protecting the White House. The next evening:

As President Trump walked across the street to Lafayette Park many of ‘Trump’s evangelical followers saw his movement that night as a victory in a world rife with evil. At that moment – we all thought ‘God give him strength! He’s doing a Jericho walk!’

A Jericho walk, in some evangelical circles, refers to the biblical book of Joshua, where God commanded the Israelites to walk seven times around the opposing city of Jericho, whose walls then came crashing down. As President Trump held the bible he looked as if he was wearing the armor of God.

For centuries, going all the way back to the Revolutionary War, this nation has had a strong cultural connection with religion from our Founding Fathers, in recent times religious faith has generated a culture war in the United States. Most recently, the focus of the protesters and extremists has shifted to historical monuments and religious statues, especially those representing the Confederacy – because one of the many issues they stood for was slavery. This is alarming. Never mind the fact that the Confederacy was not a gang of one-dimensional super-villains from a children’s television show – never mind that they also believed in states’ rights and a limited scope of the federal government, laudable principles quite aside from their repugnant support of slavery. Forget all that.

People calling for these historic monuments to be taken down from public spaces they want to whitewash the past; to remove any possible reminder than anything adverse ever happened, and why, because someone might be “offended” by it? This is beyond regret; this is censorship by political correctness. Of particular concern here is the identity of the ones calling for the censorship. These tend to be left-leaning liberal groups instigated by well-paid activists and politicians, these are the culprits and they are becoming very familiar, very organized, and very well-funded.

Antifa and the multimillion-dollar mega liberal Black Lives Matter – all of these which are so accustomed to using violence and intimidation that they are considered as homegrown terrorist organizations. And these are the people trying to tell us that we are not allowed to remember our history or even speak of it aloud. Our history is a tricky box to crack open and alter – the past cannot be changed or subsumed into an opaque abstraction and this is a truth universally acknowledged. You can learn from it and choose not to repeat parts of it that deserve to have not happened. But what happened in the past century or that before remains the same.

Decapitating, spraying, and destroying statues or religious figures of the past, of any sort, are not going to help anyone achieve any particular objective. Yet, this war is taking on a rather militant stand in the political turbulence of today, people are taking it to the streets, blindly consuming the unfounded rhetoric that pulling religious statues and monuments down is going to change the history, the present, and the ideals attached to society as a whole.

In the time spent systematically organizing themselves and attacking public and private property, it would have done well for all of these mobbish thugs ruminated on what can actually be done to support their cause (irrespective of how far they’ve digressed from the main point). The unfortunate aspect of this paradox lies in the absence of government involvement in controlling the situation. Politicians are looking away so as not to stand up for our past they fear the political ramifications to their loss of power. The liberal left praise these acts as monumental moments of ‘iconoclasm’ and applaud it for the underlying meanings of protest it contains is futile and wrong.

If bands of protesters and rioters, acting no less than a mob, can go on a spree of carefully singling out the public property, burning churches to the ground and segregating out the innocent for retribution as they are doing now, and pulling these historical and sacred figures down, they might as well venture into subjecting further religious niches to the same fate as they have reached this tipping point – for the ‘anti-establishment’ sentiments coursing through the assembled groups of people, this seems like the most obvious step to be followed next by these pack of thugs. If we allow these memorials and visual history of our nation to be destroyed by anarchists in a moment of anger, how will we ever learn from that history? Does removing and vandalizing a statue of Jesus Christ and the Virgin Mary, really serve our country and our collective memory? God serves as our source of strength and power within us.

In the early 2000s, the world watched as the Taliban destroyed the globally admired statue of the Buddhas of Bamiyan. All it took was a few minutes to blow the historic monument – any hopes of restoring the figure of faith too went with this destruction. ‘Idols’ – the statues were idols and therefore, against the beliefs of the self-proclaimed terror administrators of Afghanistan and the solution lied in getting rid of anything that stood in the way of their own faith. This intolerance is disgustful. If not of the same scale as the 2001 destruction, the current sequence of pulling down monuments and statues reflects a small fraction of this event. Along the way, the alternatives do not feature prominently in the minds of fanatics acting on their ‘instinct’ – for them, the only path ahead lies in destruction. Are we to not learn history as it happened? Should it be mandatorily restructured to suit each of our comforts and interests? Sadly, this is not how the order functions.

The memories that each statue lights in some can be painful, but in decapitating these figures, nobody’s getting the power of the last laugh. We are in desperate need to teach the historical and societal contexts that led up to its construction. Rather than destroy and break the age-old works of history and art fall, it’s advisable to preserve them as symbols of the past that needs to be remembered, for all its bad and good.

This year, we celebrate the 244th Independence Day of the United States of America. The Declaration 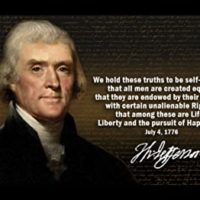 of Independence was adopted on July 4, 1776; Thomas Jefferson was a Founding Father of the United States who wrote the Declaration of Independence.  Jefferson drafted one of the most beautiful and powerful testaments to liberty and equality in world history, in Jefferson’s original draft, its immortal words remain essentially his own: “We hold these truths to be self-evident, that all men are created equal, that they are endowed by their Creator with certain unalienable Rights; that among these are Life, Liberty, and the pursuit of Happiness.”

We are the Republican Party of and for the ordinary people, “The Silent Majority”, our American dream is dying today. To every Conservative, Christian, and Faith leader: If you feel like you are losing our country, remember this is not a spectator sport. Get engaged, get involved, and stand for courage.

We in America are extraordinary – OUR FREEDOM IS WHAT WE ARE FIGHTING FOR!

This is the Left’s 'Message Discipline': Murder America

Greenfield: The Mobs are Coming for the Progressives