College leftist are embracing the “Cancel Culture.” Democrat student clubs at the University of North Dallas are petitioning to revoke the charter of a conservative student club and expel its members from campus.

The Young Conservatives of Texas (YCT) chapter at University of North Texas (UNT) has been very effective at defending conservative values and recruiting incoming college students. “Conservatism is growing at our university, even though we are surrounded by those who want to silence our voice,” says rising junior and Chairman of the YCT chapter at UNT, Ms. Kelly Neidert.

Unable to compete in the theater of ideas on campus, radical UNT College Democrats, in coordination with other radical left-wing groups on campus, want to silence YCT. They equate free speech with hate speech.

continue making your voice heard and use this template to send emails to UNT Administration about YCT! just create a unique subject line and add to the body so that the emails can’t be filtered out. ? https://t.co/Pm2l8QZoIL

University of North Texas GLAD club, “UNT’s umbrella queer organization,” is coordinating with the UNT College Democrats. One GLAD supporter tweeted “we can’t allow people like YCT UNT to exist on our campus.”  Revocation of the club charter would not be enough because the YCT “are a threat to all of us and all their members need to be expelled.”

We can't allow people like YCT UNT to exist on our campus. They are a threat to all of us and all their members need to be expelled.

When Neidert questioned such approval, the Office of Disability Access initially denied knowledge, only backing down when Neidert showed video capturing ODA’s “like.” The ODA later altering its Twitter history to cover up its political bias.

They’ve since unliked. Glad we had the recording. pic.twitter.com/rGcecR9x9F

Then UNT College Democrats and its supporters began to harass YCT. Neidert claims that a gang of 25 to 30 different people are behind the ongoing social media attack on YCT. YCT received threats of assault too numerous to track.  Although Neidert reported these threats to Twitter, Twitter has ignored her reports.

When YCT adapted an LGBTQ slogan to encourage students to “come out as a conservative” on National Coming Out Day, anonymous Twitter users got vulgar. 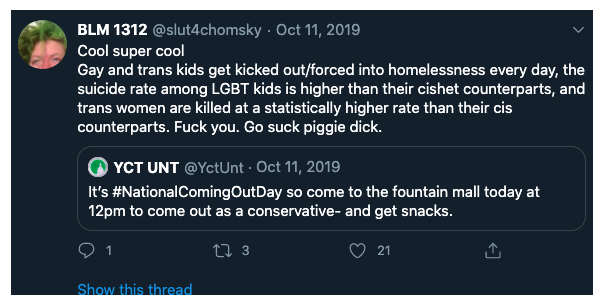 Unhinged leftists threatened assault and accused YCT of racism for posting facts about abortion rates among blacks and Latinos to illustrate leftist hypocrisy on issues relating to Black Lives Matter and illegal immigration. 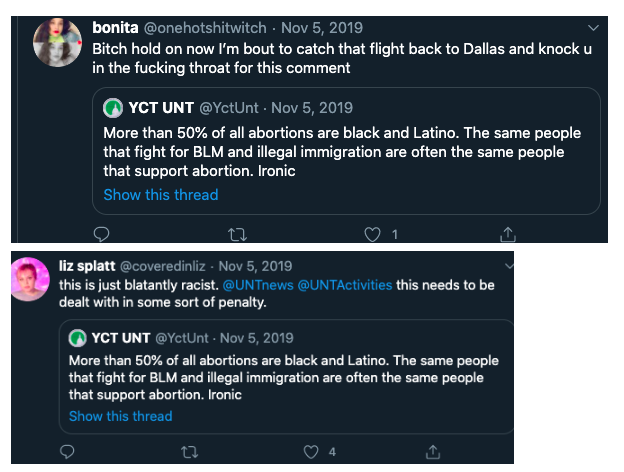 One UNT graduate and self-proclaimed “witch” invoked Satan to “hex” the group, as reported by the Free Beacon.

A former UNT student posted a picture of items for a “hex” with “intentions of misfortune” against YCT leader Kelly Neidert. Anna Katz, a recent graduate of UNT, tweeted a picture of a drawing of a goat captioned “the devil” and a cauldron. Katz, who later removed the Tweet, could not be reached for comment.

One anonymous Twitter user planned to “get into a fight with the UNT conservatives. I’m bored and filled to the brim with salt.”

you know what? I'm gonna get into a fight with the UNT conservatives. I'm bored and filled to the brim with salt.

Let me run into that kelly bitch bruh…..

Yet another Twitter user voiced her intent to hurt YCT members tweeting “if i see a UNT YCT member in real life it’s on sight and that’s a promise.”

Texas State Rep. Briscoe Cain recently replied to the UNT College Democrats in defense of YCT’s First Amendment liberties, cautioning that he and “other liberty minded attorneys would be happy to sue [the University of North Dallas] for any actions impairing any of the fundamental liberties of [YCT].”

The University of North Texas has not responded to the radicals’ petition to revoke YCT’s charter. Neidert maintains that YCT is exercising its First Amendment rights and has not violated any college policy. For now the Dean of Students supports YCT’s right to exist on campus.

Due to the ongoing COVID-19 precautions, this semester UNT will conduct classes online. Neidert confirms that YCT will be maintain a physical presence on campus campaigning for conservative ideas during this election year.

The 1619 Project Part 3: Capitalism and Banking in America