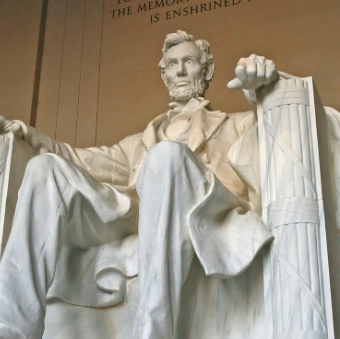 At the height of the war, Lincoln understood that he could not feed the troops without more money, so he issued a national currency, backed by the full faith and credit of the United States — but not by gold. Lincoln assured critics that the move would be temporary, but leaders who followed him eventually made it permanent — first Franklin Roosevelt during the Great Depression and then, formally, Richard Nixon in 1971.

Granted, Lincoln removed the gold standard from U.S. currency during the Civil War, but that decision was in no way connected directly to the perpetuation of slavery. It was a means of supporting the war effort for the many reasons the war was deemed necessary.

While Lincoln’s personal views at the time were contrary to the equal status enjoyed by black Americans today, for the time in question it was relatively moderate in that he did not support the perpetuation of slavery.  The issue of slavery was intricately woven into the alleged reasons for the Civil War, but it was just as much about the issue of the rights of states to leave the union than it was about the continuation of slavery.

There were also issues involving tariffs and other burdens placed on the southern states that were not shared by the northern states (a practice that is clearly forbidden by the constitution).  All of these, in total, resulted in issues that were not seen as easy to correct if the southern states remained under the thumb of the federal government.  The connection between Lincoln’s decision to issue currency not backed by gold and the decisions made by Roosevelt and Nixon is about as clear as mud. Each was dictated by dubious decisions brought about by circumstances at the time.

The production of cotton was a labor-and land-intensive process that was helped by the use of slave labor. That ability to produce high production rates made cotton one of the most lucrative crops and sources of revenue in the country at that time. Because it was land-intensive, banking became a major part of the economy and many of them sprang up to aid in the acquisition of land to be used to increase cotton production. There is no doubt that slaves suffered from this intensification of effort to push production to higher and higher levels. These efforts also enhanced the growth of the American economy.

However, cotton was not the only source of economic growth and to suggest that it was the singular reason America has prospered is to, again, push an agenda not entirely in alignment with the facts and truth.

The laws and contracts referred to are nebulous and have many variations. If some of these instruments, such as mortgages, land contracts, and such were creations of the banking industry as a means of aiding the expansion of America prior to industrialization (including the expansion of cotton-producing land), they can still not be tied directly as instruments that were developed specifically to perpetuate or expand slavery. They were nothing more than a variety of instruments needed to allow the extension of capital for a variety of purposes necessitated by an enlarging population and the exploration and development of lands as expansion moved west of the Appalachian Mountains. There is no definitive evidence that any of the financial and legal instruments of that era were exclusively developed as aids to perpetuation of slavery as an institution.

From the first decades of the 1800s, during the height of the trans-Atlantic cotton trade, the sheer size of the market and the escalating number of disputes between counterparties was such that courts and lawyers began to articulate and codify the common-law standards regarding contracts…Today law students still study some of these pivotal cases as they learn doctrines like foreseeability, mutual mistake and damages.

The excerpt above, again, take terms like “foreseeability, mutual mistake, and damages” and suggests because the common law that pre-existed slavery in America by a century or two was beginning to be codified during the early 1800s that those terms were of no other use than to clear up disagreements surrounding the slave trade.

Clearly, these legal terms/principles have been applied to many different issues and circumstances back then and in the decades since. They are not exclusively slavery-related but of general interest to any student of tort or equity law.

Because some case involving slavery resulted in a legal principle or precedent does not taint all such studies of law as less than valid because of slavery.  To suggest such is completely deceptive and agenda-promotion rather than rational thought.  Any time there is an expanding economy and a rapidly growing society, legal issues will arise that may not have presented themselves in the past. Trying to tie everything that happened in America to slavery is disingenuous and a distortion of reality.

While there is no argument that cotton had an enormous influence on the early economy of America and that slavery was the means to make it profitable, we are repeatedly going over the same ground with all of these arguments that suggest that because America allowed slavery at its beginnings everything that followed was so tainted and evil and that American should continue to do penance for what was a way of life at the time it was happening.

Attitudes have changed across the board in the ensuing 150+ years, and it is highly disingenuous to claim that were it not for slaves America would have failed. Or that because America allowed slavery it should be forever punished and condemned for the sins of people long dead.

Every legal document developed during the years when slavery was permitted are not necessarily related to slavery. But the common thread throughout The 1619 “Project” is to do just that–to read slavery into every little item or incident that took place over a period of 250 or more years.

To do so is to distort reality and read things into events and papers that simply co-existed with slavery but were not responsible for it or its effects on black Americans since slavery was abolished.

Bold-faced and quoted portions are excerpted from the 1619 Project documents available here.

Biden Tries to Use Leftists Who Are Using Him

The 1619 Project, Part 5 Conclusion: Everything Is Racist.