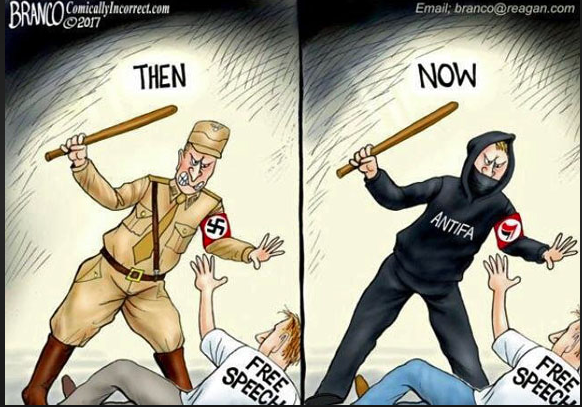 The lopsided manner in which the mainstream media reports news is something I find increasingly more disturbing. At this point does anyone believe that CNN, The New York Times, The Washington Post or the majority of most MSM outlets actually report the news in an unbiased fashion? The majority of MSM outlets lean left…very left. They treat President Trump as an enemy of the people. Everything he says or does is given a negative slant. If anything in this country goes amiss, they are all too eager to blame it on the President. If anything goes well, they make sure he gets none of the credit.

These outlets are also eager to lend credence to leftist ideology. They report violent protests as ‘peaceful’ and label the attempt to re-write our history as ‘acceptable’ if not downright ‘preferable’ and ‘essential.’ People who destroy private property and tear down and/or deface public property are depicted as ‘victims’ and their behavior is described as ‘justifiable.’ People who kneel instead of stand for the National Anthem are depicted as ‘brave’ or ‘heroic’ and even ‘patriotic.’ If you combine what is reported in the leftist media with the leftist propaganda now being pushed in our public schools and universities, we have a situation in which Americans (in the words of President Trump) “are being taught to hate their own country.”

I listened carefully to President Trump’s Independence Day speech at Mount Rushmore. I felt it was a wonderful speech that painted an accurate depiction of the way most Americans see their country. It stirred my feelings of patriotism and his words reminded me of our great American heroes. If this speech had been given by any other President in the last 5 decades it would have been hailed for what it was: A call to patriotism and a reaffirmation that this country isn’t going to abandon its own history and symbols. Instead, the MSM decried Trump’s speech as ‘divisive.’

Present day America is a baffling conundrum of vastly opposing viewpoints. More often than not, the leftist position gets more attention than other viewpoints. Anyone who publicly espouses a viewpoint not consistent with the left is immediately labeled ‘racist, bigoted, narrow-minded, insensitive, ignorant, etc…’ The left-wing media hides behind the first amendment even as they try to strip freedom of speech from others.

If one views the U.S. Constitution as something that can be adapted (through legislation and amendments) to serve different generations of Americans, each with their own societal norms and mores, then one has to re-evaluate from time to time some of the basic doctrines of the Constitution. Freedom of Speech has always been the cornerstone of our democracy and its viewed as our most sacred right. However, I think there needs to be open debate about the nature of free speech in our current environment.

Taken as a whole, could one make a valid argument that the leftist media is creating a dangerous situation in America? I think so. They aren’t reporting news. They are reporting opinions under the guise of news. It got me to thinking about prudent limitations on free speech as defined in the classic example that ‘you can’t yell fire in a crowded theatre’ when there is no fire. I’ve heard that rule many times but I didn’t know much about it’s origin. I learned a lot from researching it.

In 1919, the Supreme Court heard Schenck v. United States. The issue at hand was whether or not it was illegal to distribute pamphlets that urged eligible draftees to dodge the draft. These pamphlets were distributed in 1917 during World War I and violated the Espionage Act of 1917 which prohibited any interference with U.S. military activity. The Supreme Court arrived at a unanimous decision in this case and ruled that the distribution of literature encouraging people to resist the draft during a wartime situation did in fact violate the law. Justice Oliver Wendell Holmes, Jr. wrote the opinion and said that the pamphlets represented a clear and present danger.

Holmes, speaking for the Court, noted that there are limits to free speech. He said free speech doesn’t cover things such as “falsely shouting fire in a theater and causing a panic.” In subsequent cases, the Supreme Court replaced/clarified the ‘clear and present danger’ rule with the ‘imminent lawless action test’ which prohibits speech that advocates lawless action and is likely to incite such action.

Given that free speech is not an absolute right and subject to reasonable limitations, why isn’t anyone applying these principles to the manner in which news is currently being reported?

For example, take the Seattle Capital Hill Occupied Protest (CHOP). Since when is ok to overrun a police precinct and occupy it and the surrounding area? When did it become ok for individual citizens to occupy public and private property and erect their own barricades? What gave them the right to declare it a ‘police free’ zone? That kind of behavior is completely illegal and represents a complete and total lack of respect for civilized society. However, to hear the leftist media report it, CHOP was a peaceful utopian society in which intellectuals made speeches and exchanged ideas.

Ultimately, the Seattle mayor was forced to reimpose order, but this was weeks after the occupation began. To me, CHOP should never have been allowed to take place. Call me crazy but the government should act immediately to put down instances of lawlessness and anarchy.

Nevertheless, I question how the media reported it. Doesn’t their implicit support of such behavior violate the ‘imminent lawless action test?’ I’d argue that a reasonable (albeit misguided) person may read the news accounts of such an event, deem such behavior necessary (despite it being illegal), and be inspired to engage in similar behavior. I find the media’s behavior quite threatening. The way they depict racial issues is particularly disturbing. I’m no fool. I am totally aware that racial injustice exists. However, do the actions of 4 rogue cops in Minneapolis murdering a black man in custody mean that all progress made by African-Americans since the Civil Rights movement of the 1960’s were merely an allusion? Thanks to the media the death of George Floyd led to worldwide protests. The police are now being depicted as racist villains who should be opposed or eliminated instead of protectors of the public peace and welfare. Forget the fact that statistics do not match the narrative being pushed.

Organizations such as BLM have been empowered to stage protests with no clearly defined achievable objective. Who controls BLM? Does it’s agenda support American ideals? Does it even further the interests of African-Americans for that matter? Are well-intentioned leaders organizing and carrying out these protests? If so, what are they doing to ensure safety? Couldn’t BLM organizers easily switch the target from cops to Trump and couldn’t widespread riots be organized if and when Trump is re-elected?

If you think I’m endorsing the silencing of the press, consider this: Facebook is being boycotted by advertisers who want it to censor President Trump. So far Facebook hasn’t caved in, but it’s inevitable they will. The left wants to silence all opposing views. If a viewpoint doesn’t come from the left, it’s labeled ‘hate.’ If it’s one of their viewpoints, it’s fine, even if it promotes hate. Consider this: If someone tried to assassinate President Trump and the authorities found nothing but New York Times clippings in the assailant’s domicile, would it make sense?

Free speech needs to be re-evaluated and perhaps new laws should be passed. I would be totally opposed to censuring the press on a whim, but I’m totally in favor of the press being prosecuted for irresponsible hate mongering and language which could incite violence and lawlessness. I’m tired of them shouting ‘fire’ when no threat exists. Further, social media platforms should be prohibited from censuring individuals. If a person posts something that could incite violence or lawlessness, let them be proscecuted as well. Don’t deprive them of due process under the guise of a platform’s ‘policies’ and ‘standards.’

Greenfield: Jewish Federations are Promoting a Farrakhan Fan Who Told Jews to "Go F___ Themselves"