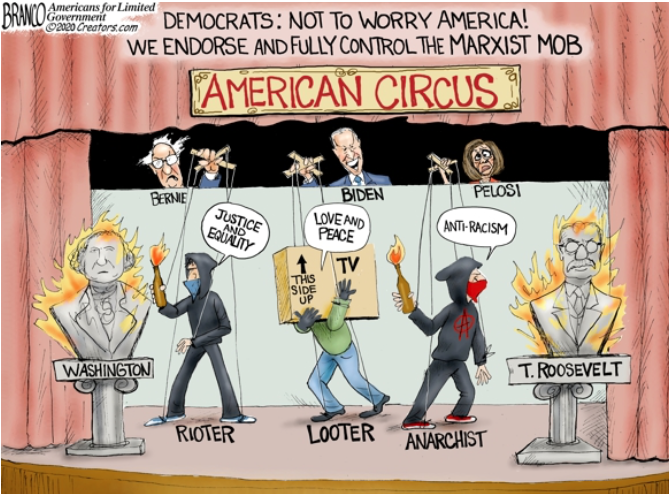 It’s getting dangerous out there. Most people in the recent past who have fallen victim to crime are themselves associated in some way with crime or criminals. Not always of course. And even those involved in crime, or in some casual way with others involved in crime, can be innocent victims. This is different.

It was rare enough, even a few months ago, that the national news failed to cover a victim not associated in any way with crime.

That’s changing. There’s a rage taking root in our country and it’s no respecter of persons, anyone can fall victim no matter their behaviors, history, race, or age. No matter who they are or where they live.

According to Seattle’s Mayor, the CHOP district was supposed to be the locus for a new “summer of love.” After 4 shootings, and a huge number of rapes, assaults, and robberies, the city seems to be reasserting control. Still, it seems more likely that’s the case because the Mayor’s home was vandalized than because a 16 year old black teen was murdered. From what we know now, the murdered teen wasn’t a gang member or associated with criminals or criminal behavior. He just happened to be in the wrong place at the wrong time.

Likewise a 92 year old woman 3,000 miles away. The woman was attacked by a 31 year old man she’d never met and with whom she had no association. He just randomly pushed this old woman into a fire hydrant as she was walking up 3rd Avenue. The assailant had been arrested more than 100 times, and released to further his mayhem. Most recently he was sent back into society thanks to Mayor de Blasio’s bail reform. Police worry he’ll be released again from this latest assault. And on it goes till someone is murdered.

Earlier, a few miles away, a 20-something black man with 18 prior arrests for crimes in the subway system, attacked a white woman waiting to get on a train. She too was a random victim. He too had been repeatedly released from jail without ever going to trial.

The new trend is due largely to a complex juxtaposition of a sordid variety of factors. Mostly though, it’s the result of progressive policies by Mayors and Councilmembers who encourage the violence. They simply don’t want to crack down for fear of appearing insensitive to the legitimate concerns of race, or standing against the illegitimate demands of radicals.

The media is complicit because they don’t cover events that counter their preferred narratives. We listen to them tell us, “CHOP is a new utopia of the woke that proves left-wing activists can create a new kind of just society.” “Blacks are the victims of institutions and culture that is racist to its core.” “Police are a bigoted, evil, and incompetent arm of an unjust establishment that seeks to keep minorities down.”

In Houston, a white man in a convenience store said to several black men who were cutting in line, “there’s a line for a reason.” They met him in the parking lot and beat him till be required hospitalization. There have been no arrests.

A lady in Los Angeles was attacked for no apparent reason by a Hispanic or black man wielding a skateboard. He slammed her in the head, knocked her out, dragged her into the bushes, then ran off. No arrest has been made.

The backlash was inevitable. In Iowa, a young black man who had just visited his girlfriend was accused of burglary by several white men. The whites brutally attacked the young black man, broke his arm and several bones in his face.

And as long as it’s protesters attacking, the color of the victim doesn’t matter, they get off scot free. In Wisconsin, white and black protesters attacked a black man who they claimed tried to ram a protester on a bicycle with his car. Turns out the protester threw his bicycle at the car and the man driving the car was then overwhelmed and beaten by the protesters. No one has been arrested.

These are drops in the sea of savagery that is now a daily occurrence across America.

The only things they share in common are brutality, unpredictability, and the seeming lack of any law enforcement follow-up. The there’s the fact they all happened in cities run by liberal Democrats.

Criminals, thugs, anarchists, and losers of all stripes believe they are immune from legal retribution. Unfortunately, they’re right. Turns out all the left’s harangues earlier this year that, “no one is above the law,” were meant only for President Trump. BLM, ANTIFA, and the rioters under their control clearly are above the law.

With police budgets being cut, and cops told to stand down, law-abiding citizens are taking matters into their own hands. Gun stores are running out of inventories of weapons and ammunition.

None of this will end well. One social casualty is that the cause of race relations will be set back by decades.

Blacks are permitted to hate whites. Most whites, who don’t believe they’re racists and truly want blacks to succeed, are confused. Many are becoming frightened by the aimless rage and violence.

It would help immensely if police were given the authority to meet their responsibility – protect and serve. But that’s unlikely to happen. Both the mob and the local politicians are Democrats. It would be impolitic for those in authority to hold accountable those in their own party.

The only solution left is for leaders in the black community to take a strong, uncompromising, stand against the mob. Every day they refuse to condemn the violence and rage surrounding this moment, they make themselves complicit in the hatred destroying our unity and our nation.