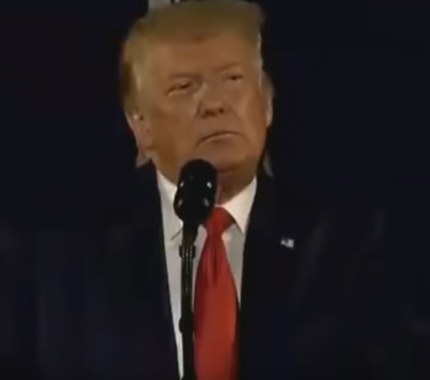 President Trump’s July 4th speech at Mount Rushmore was historic. It was one of soaring rhetoric that celebrated America but also one that laid out the clear and present dangers from within that must be engaged and defeated. Whether we want to admit it or not we are in a culture war for the future of this country.

Here are some highlights of the speech.

A celebration of America

Our Founders launched not only a revolution in government, but a revolution in the pursuit of justice, equality, liberty, and prosperity. No nation has done more to advance the human condition than the United States of America. And no people have done more to promote human progress than the citizens of our great nation.

We are the country of Andrew Jackson, Ulysses S. Grant, and Frederick Douglass. We are the land of Wild Bill Hickock and Buffalo Bill Cody. We are the nation that gave rise to the Wright Brothers, the Tuskegee Airmen, Harriet Tubman, Clara Barton, Jesse Owens, George Patton — General George Patton — the great Louie Armstrong, Alan Shepard, Elvis Presley, and Mohammad Ali. And only America could have produced them all. No other place.

We gave the world the poetry of Walt Whitman, the stories of Mark Twain, the songs of Irving Berlin, the voice of Ella Fitzgerald, the style of Frank Sinatra, the comedy of Bob Hope, the power of the Saturn V rocket, the toughness of the Ford F-150 and the awesome might of the American aircraft carriers.

I’m not sure I’ve ever heard Elvis and Sinatra mentioned in a speech before.

Assessment of the opposition

And yet, as we meet here tonight, there is a growing danger that threatens every blessing our ancestors fought so hard for, struggled, they bled to secure.

Our nation is witnessing a merciless campaign to wipe out our history, defame our heroes, erase our values, and indoctrinate our children.

Angry mobs are trying to tear down statues of our Founders, deface our most sacred memorials, and unleash a wave of violent crime in our cities. Many of these people have no idea why they are doing this, but some know exactly what they are doing.

This is SO important to understand and I was thrilled to hear President Trump articulate it. Most of these folks have no clue about history and are just pawns in an orchestrated effort to undermine the country. Those doing the orchestrating know EXACTLY what they are doing – causing anarchy.

I sure hope he is right about that. Witnessing how easily state governments have been able to put restrictions over the virus are disconcerting.

One of their political weapons is “Cancel Culture” — driving people from their jobs, shaming dissenters, and demanding total submission from anyone who disagrees. This is the very definition of totalitarianism, and it is completely alien to our culture and our values, and it has absolutely no place in the United States of America. This attack on our liberty, our magnificent liberty, must be stopped, and it will be stopped very quickly. We will expose this dangerous movement, protect our nation’s children, end this radical assault, and preserve our beloved American way of life.

In our schools, our newsrooms, even our corporate boardrooms, there is a new far-left fascism that demands absolute allegiance. If you do not speak its language, perform its rituals, recite its mantras, and follow its commandments, then you will be censored, banished, blacklisted, persecuted, and punished. It’s not going to happen to us.

This is so spot-on. It is so great to hear yet at the same time disappointing because it took Trump to come along and articulate it.

Make no mistake: this left-wing cultural revolution is designed to overthrow the American Revolution. In so doing, they would destroy the very civilization that rescued billions from poverty, disease, violence, and hunger, and that lifted humanity to new heights of achievement, discovery, and progress.

To make this possible, they are determined to tear down every statue, symbol, and memory of our national heritage.

AUDIENCE MEMBER: Not on my watch!

One of the best moments of the event!

The violent mayhem we have seen in the streets of cities that are run by liberal Democrats, in every case, is the predictable result of years of extreme indoctrination and bias in education, journalism, and other cultural institutions.

Against every law of society and nature, our children are taught in school to hate their own country, and to believe that the men and women who built it were not heroes, but that were villains. The radical view of American history is a web of lies — all perspective is removed, every virtue is obscured, every motive is twisted, every fact is distorted, and every flaw is magnified until the history is purged and the record is disfigured beyond all recognition.

Those who seek to erase our heritage want Americans to forget our pride and our great dignity, so that we can no longer understand ourselves or America’s destiny. In toppling the heroes of 1776, they seek to dissolve the bonds of love and loyalty that we feel for our country, and that we feel for each other. Their goal is not a better America, their goal is the end of America.

In its place, they want power for themselves. But just as patriots did in centuries past, the American people will stand in their way — and we will win, and win quickly and with great dignity.

The enduring values of our country

We will state the truth in full, without apology: We declare that the United States of America is the most just and exceptional nation ever to exist on Earth.

We are proud of the fact that our country was founded on Judeo-Christian principles, and we understand that these values have dramatically advanced the cause of peace and justice throughout the world.

We know that the American family is the bedrock of American life.

We recognize the solemn right and moral duty of every nation to secure its borders. And we are building the wall.

We remember that governments exist to protect the safety and happiness of their own people. A nation must care for its own citizens first. We must take care of America first. It’s time.

We believe in equal opportunity, equal justice, and equal treatment for citizens of every race, background, religion, and creed. Every child, of every color — born and unborn — is made in the holy image of God.

We want free and open debate, not speech codes and cancel culture.

We embrace tolerance, not prejudice.

We support the courageous men and women of law enforcement. We will never abolish our police or our great Second Amendment, which gives us the right to keep and bear arms.

We believe that our children should be taught to love their country, honor our history, and respect our great American flag.

We stand tall, we stand proud, and we only kneel to Almighty God.

This is who we are. This is what we believe. And these are the values that will guide us as we strive to build an even better and greater future.

Basically everything the left opposes – sanctity of life, police protection, borders, debate, and love of God. You know, terrible things!

A Call to Action

My fellow Americans, it is time to speak up loudly and strongly and powerfully and defend the integrity of our country.

It is time for our politicians to summon the bravery and determination of our American ancestors. It is time.

We’re looking at people like YOU Mitch McConnell and the majority of the Republicans in Congress who have been silent to this point.

We will proclaim the ideals of the Declaration of Independence, and we will never surrender the spirit and the courage and the cause of July 4th, 1776.

Upon this ground, we will stand firm and unwavering. In the face of lies meant to divide us, demoralize us, and diminish us, we will show that the story of America unites us, inspires us, includes us all, and makes everyone free.

We must demand that our children are taught once again to see America as did Reverend Martin Luther King, when he said that the Founders had signed “a promissory note” to every future generation. Dr. King saw that the mission of justice required us to fully embrace our founding ideals. Those ideals are so important to us — the founding ideals. He called on his fellow citizens not to rip down their heritage, but to live up to their heritage.

Above all, our children, from every community, must be taught that to be American is to inherit the spirit of the most adventurous and confident people ever to walk the face of the Earth.

This is most critical. If we don’t get control of education then nothing will change.

My fellow citizens: America’s destiny is in our sights. America’s heroes are embedded in our hearts. America’s future is in our hands. And ladies and gentlemen: the best is yet to come.

This was a brilliant speech that will resonate with the majority of the American people. President Trump has now fully engaged the forces that seek to destroy and re-make out country in their image. He is calling us to join him. I think the audience member that shouted out has given us our marching slogan: “Not on my watch”.

Greenfield: Hundreds of Streets and Schools are Named After a Black Nationalist Ally of the KKK

Greenfield: "Give Me Money Or We'll Break Windows"