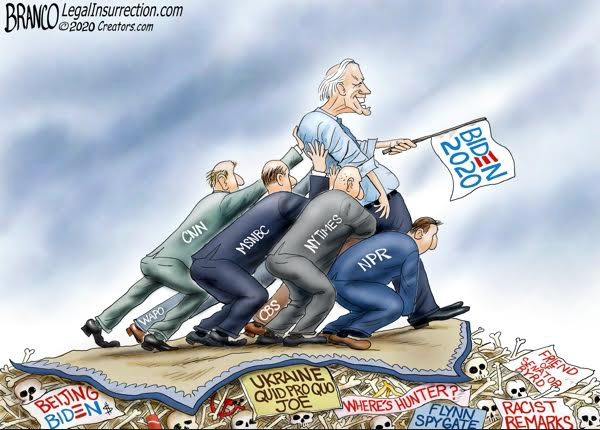 Donald Trump’s election was for a pretty sizable group of Americans a thumb in the eye of an establishment that took them and their values for granted.  As with societies’ elites pretty much throughout history, America’s social elites had become cynical, weak, and corrupt – more interested in protecting their wealth and power among a global network of peers than in promoting the interests of their fellow Americans.

In Donald Trump, much of America saw someone who would stand up to those corrupt leaders. And, for the most part, they got exactly what they thought they’d get.

Joe Biden’s election in November would be a solid vote to return control to that weak, pandering, and corrupt establishment.

With Biden and his associates, we’ll go back to the same trade arrangements of the Obama-Biden years when damn near every country on the globe took advantage of us. So what if it means fewer jobs for Americans? The Biden elites care more for their standing among fellow internationalists.

It’s the same reason Biden announced he would keep the United States in the dysfunctional and blatantly corrupt World Health Organization within minutes of President Trump announcing America would withdraw from the WHO.

For Biden’s people, it’s a good thing the US funds the UN, becomes entangled with China, is dependent on Middle Eastern energy, and cuts a deal with Iranian terrorists. Those things enhance their own egos and wallets as well as the egos and wallets of their friends in Europe, Russia, and Asia.

You can also be sure Biden will undo all the work Trump has done to prevent China’s stealing our military and corporate secrets. They see such inhibitions as impediments to their personal ambitions.

Look at two specific examples. While Biden was Vice President, he took his son on a trip to China in which his son gained a contract to manage $150 billion for the Chinese Communists.

On another occasion, Joe’s son accompanied him to Ukraine where he obtained appointment as a member of the board of a Ukrainian energy company that paid him $85,000 per month. Joe’s son had no experience in energy, no background in Ukraine, and no reason to be appointed except that he was the Vice President’s son.

For his part, Biden denied knowing anything about either deal. But how likely is it Biden’s son wouldn’t mention a $150 billion deal on one hand, and a million dollar a year job on the other, during all those hours traveling together around the world?

It’s a little like Hillary claiming she had nothing to do with Chelsea landing a million dollar job fresh out of college.

But the problem with corruption is that it doesn’t just enrich those infected by it, it impoverishes everyone else.

In Biden’s quest for power, he has to gather the far left of the Democrat Party behind him. Not being wedded to principle, that’s not a particularly difficult problem. He just rolls over and gives the left whatever they want.

That’s the only reason he appointed Alexandria Ocasio-Cortez, creator of the Green New Deal, his energy czar. He’s perfectly happy to go along with her plan to trash our coal and fossil fuel industries if it will get him the votes of her supporters. It doesn’t matter to him that it will force the U.S. back into dependence on countries like Saudi Arabia, Iraq, and Russia.

And, of course, Joe will go hat in hand – and cash in wheel barrel – to Iran and beg forgiveness for Trump’s pulling the U.S. out of the Iranian nuclear deal he and Obama cut. So what that experts say it was one of the worst deals in U.S. history; or that the $150 billion he and Obama turned over was used by terrorist groups to kill Israelis and American soldiers, or that Iran started violating it before the ink was dry on the signature line. No problem!

Biden, along with AOC the climate expert, will also re-engage the U.S. in the Paris Climate Accord; a deal in which the U.S. pays more than anyone else and takes the biggest economic hit. All this despite the fact we are far from the biggest polluters on the planet and we’ve cut our emissions in the last 5 years by more than 12% while the rest of the world increased carbon emissions by more than 24%. Ah, but at least, the United Nations will get to dictate climate policy to American companies and American families. We saw how well that worked out for the world’s ability to stop the Chinese virus under the leadership of the WHO.

Does anyone think putting the UN in charge of deciding how much water we use, what kind of car we drive, what our thermostat is set to, or how far we’re allowed to travel each year is a good idea? Well, as a matter of fact yes. Joe Biden, AOC, and their radical climate fan club apparently think it’s a great idea.

Anyone think the windmills you’re forced to build in your backyard, or the solar panels you’ll be required to install on your roof, will be made in the USA? If you do, I have a bridge in Hong Kong I’ll sell you cheap.

And here’s an idea for reformulating police departments across the country. Put U.N. peacekeepers in charge. Don’t think AOC and her socialist cadre haven’t already thought of it. There likely atwitter at the prospect of those baby blue uniforms.

It won’t surprise if Biden decides to turn much of our military hardware over to the U.N. They’ll finally have the military they’ve always wanted, and Biden will be able to redirect all the money we spend on those pesky national security issues to favored voting groups.

Joe and his friends, aren’t interested in national security, but in preserving the security of their place among global equals.

Those in other countries, on the other hand, are very interested in gaining control of America. Not only does that remove the only impediment to their global domination, they also realize a huge economic boon to their own economies – until that is they destroy the U.S. market with socialist government.

There’s increasing evidence the real string-puller manipulating Biden is Barack Obama. A recent report from the New York Times is headlined, “Obama Gets Back Into The Fray.”

The NYT report continues, “President Barack Obama wanted to keep a low political profile after he left office. In recent months, though, he has taken an increasingly active role. He speaks with Joe Biden frequently, offering suggestions on staffing and strategy. People close to Obama told The Times that he has been wary of overshadowing Biden. But one Biden associate joked: “By all means, overshadow us.”

We saw how the Obama-Biden foreign policy worked out over 8 long and painful years of American decline. A Biden-Obama-AOC approach will only be worse.

Yes, They ARE Coming For Your Guns.