Forget the Confederacy. The Socialist Taliban pulling down statues have gone after Confederate statues, but their real targets have been the civic monuments that symbolized unity and progressive politics.

Toppling Lady Forward, like banishing Theodore Roosevelt’s equestrian statue, accompanied by an Indian and a black man to symbolize the former president’s friendship for other races, from the American Museum of Natural History, another icon of progressive symbolism, is no accident. 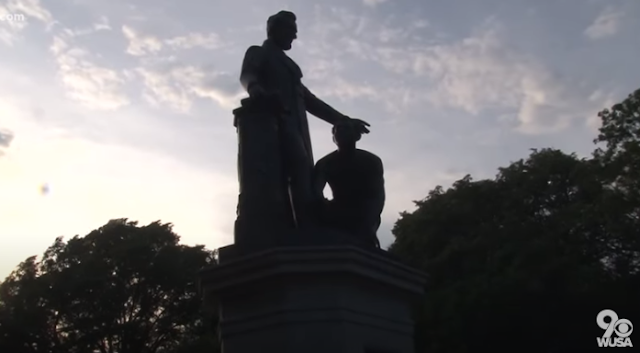 Confederate statues aren’t very threatening to the leftist cause, but the old progressivism, rooted in the conviction that America was a basically good country that would come to fully embody goodness, is still a competitor for the hearts and minds of the people that BLM and Antifa would like to see join them.

It’s also why the Emancipation Memorial, depicting Lincoln and a freed slave, is a threatening image. The previous assaults on Lincoln, Grant, Union commanders, and even the ‘Glory’ memorial to an African-American Civil War regiment, are not the work of ignorant people, but of radicals who are attacking the symbols of the progressive historical narrative that they hate because it undermines their agenda.

The Union iconography tells a story of the end of slavery. The Black Lives Matter narrative is that slavery never ended, not only in the South, not with the end of Segregation, and not even in the 21st century.

America was born in sin and never stopped being a racist society built on white supremacy.

Many critics of the 1619 Project have missed the most important point, which is that the revisionist history not only falsely accuses America of having been built around slavery, but is a component of a larger argument that slavery still exists today and operates using disguised modern institutions.

The movement to defund the police, like the rest of the criminal justice reform impetus, derives from the conspiracy theory that the justice system is modern slavery, with the police as the slave catchers. Police officers, prosecutors, and even people who call the police, white or black, are the slave catchers, sellers, and informants in a racist system that cannot be redeemed, but must be entirely destroyed.

To radicals who think this way, Lincoln being presented as the man who freed the slaves is a myth that prevents people from seeing the truth. And the entire progressive narrative of history is a racist lie covering up the truth that slavery and Jim Crow did not end and won’t end as long as ‘whiteness’ exists.

The significance of the kneeling black man in the Emancipation Memorial, now targeted for destruction, is not subservience to Lincoln. Instead, it reflects the moment when freed slaves in Richmond knelt before President Lincoln, only to be told to, “kneel only to God and thank Him for your freedom”.

Post-Civil War Republicans attached great significance to this mutual liberation and religious unity, but to the Marxists of Black Lives Matter and Antifa, the religious connotations are meaningless. Much like the biblical verse on the Liberty Bell, the theological convictions that fueled pre-war abolitionism and post-war integration are completely alien to their irreligious radical descendants.

The radicals tearing down statues see religion as enslaving, not liberating. That’s one possible reason so many churches and synagogues were vandalized during the Black Lives Matter riots across America.

Emancipation once meant that slaves were freed from slavery and that the nation was freed from the sin of slavery. That 19th century political theology has long since been discarded to argue that emancipation, for the former slaves or for the nation, is impossible. The conjunction of critical race theory and black nationalism contend that the original sin wasn’t really slavery, but whiteness.

America will be as racist and oppressive as it is white. The only way to advance is through destruction.

The progressives envisioned a modern America. The three Republican presidents so iconic to progressives, Lincoln, Grant, and Theodore Roosevelt, were the pivotal figures in the making of that modern America with a strong central government and an eye on the next century, until Woodrow Wilson and FDR flipped the script and the Republicans became the conservative political party.

The progressive memorials to them are being targeted for removal and demolition to bury that vision.

Destroying the work of the old progressives has more in common with the Taliban than just the demolition of old statues. Like Islamic theocrats, the leftist mobs are destroying symbols of heresy. The heresy embodied by everything from the Emancipation Memorial to the multiracial trio of Theodore Roosevelt and two minority men, is that racial progress is inevitable because of American values.

An idea that, until recently, was almost universally held by most Democrats and liberals, is being symbolically destroyed to make way for the new theology of Ta-Nehisi Coates and Ibram X. Kendi.

The larger symbolism is that the only way to redeem America is to destroy it as a nation.

There was a great deal that was wrong, foolish, and destructive in the old progressives, who burdened us with an endlessly expanding state, a conviction that science and technology can solve everything, and the delusion that the purpose of a nation is to progress to some unspecified social utopia, but they were, above all else, optimists who believed that things would get better if we wanted them to.

The new progressives occasionally mime optimism, but they are really savage pessimists.

One of the fundamental dividing lines between moderates and extremists is despair. Moderates are optimists, sometimes foolishly and wrongly so, while the extremists believe that the situation is irredeemable unless the most extreme measures are applied to tear apart and remake society.

While the media insists that its political allies are moderates, their destructiveness and despair mark them as extremists whose essential message is that we can only be saved by destroying everything.

From Jonestown to CHOP, despair is the inevitable outcome of utopian ambitions. The fanatics who are convinced that the world must be saved or damned, that there is no middle ground between racism and social justice, pursue apocalyptic revolutions while seeking to punish the public for the lack of progress.

The Emancipation Memorial and the Confederate statues both arose out of a conviction that we must forgive and love each other. The statue vandals are equally convinced that there cannot be forgiveness, only hate. The Americans who tried to knit the nation together after the Civil War believed that only God could judge and forgive the blood that had been shed on both sides. The Marxist mobs believe that there is no god, only the inescapable momentum of history bending its arc inevitably toward justice.

And that justice and vengeance is their birthright and their heritage.

It’s not the Confederacy, long defeated, they are out to kill, but the thing that all radicals hate the most, the moderate ideas on their own side that compete with them for the hearts and minds of their base.

The mobs are coming for the old progressives and the declining liberals, for anyone who still believes that unity is more important than division, and that we can find common ground through forgiveness.

It’s not the Confederacy they’re after: it’s any alternative to a violent revolution.

Liberals had excused the trends in the black community that replaced Martin Luther King with Malcolm X, and civil rights with black nationalism. They had defended the rise of white radicals on campuses, and then watched passively as those radicals took over government offices, academia, and corporations.

The chickens, as Malcolm X and Jeremiah Wright liked to say, are coming home to roost.

The mobs aren’t just here to smash up old Confederate officers. They’re out to destroy Lincoln and Grant, to tear down the Columbus statues erected by Italian immigrant groups who wanted to plant a civic flag to show they belonged, and the statues of assorted Union officers put up by other patriotic immigrant groups to show that they too had a place in the nation.

And what the mobs are out to destroy, most of all, is that old liberal vision of America. And, by the time they’re done, if there are any liberals still left, they will throw them in the same rivers and fires in which they’re casting those old symbols of progress, the explorer who defied the skeptics, the men who envisioned a representative republic, the emancipation of the slaves, and a modern America.

The mobs are coming for our history and our future. They’re coming for America and for progress. Americans used to believe that things will get better. The mobs are here to destroy that hope.

The Taking Down Of America

Why We Celebrate Independence Day