Mekhi James, a 3-year-old boy, cried, “It hurts”, after he was shot in Chicago.

Natalia Wallace, a 7-year-old girl described as “quiet and sweet” was shot and killed on the sidewalk.

“Where is the outrage? Our babies are being shot. These are our babies,” Chicago PD’s Chief of Operations Fred Waller, who is African-American, asked. 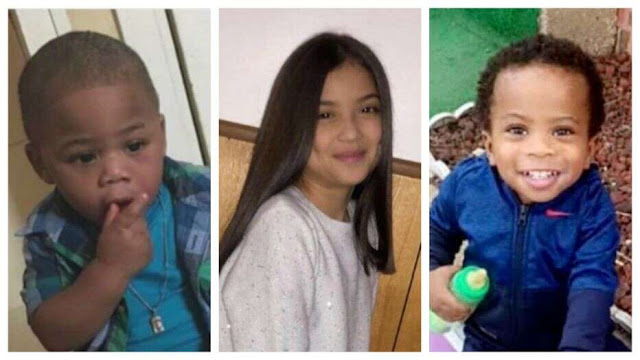 The question ought to be directed to Black Lives Matter as the BLM Effect fuels shootings and deaths around the country. And the most vulnerable of the BLM Effect’s victims are black children.

Eight children under the age of 10 have been shot in Chicago in the past few weeks. The cause of these shootings is an upsurge in crime from the Black Lives Matter riots that have devastated the country.

Chicago murders are up 83% in June, while arrests fell 55%, street stops 74%, and traffic stops 86%. If you want to see what defunding the police looks like, just stop by Chicago and bring a bulletproof vest.

Mayor Lightfoot argues that it’s due to the police being tied up by the Black Lives Matter protests.

And they’re both right. The BLM Effect has a dual function.

The protests are tying up large numbers of cops, leaving gang members free to fight their battles, and the dismantling of proactive policing and the scapegoating of cops makes the police less proactive.

Alderman Chris Taliaferro, the African-American chair of the Chicago City Council Committee on Public Safety, said, “Our police officers don’t want to be the next headline.”

Even as Democrats around the country endorsed Black Lives Matter and championed defunding the police, Chicago’s black political leaders rushed 1,200 cops to the streets for the July 4th weekend.

African-American Police Superintendent David Brown ordered sweeps of street corners for gang members and pleaded with the courts to keep them in jail for at least the weekend.

“Our endgame is arrests,” he said, vowing to break, “the pipeline for shootings and murders in Chicago.”

A white ACLU official warned that would, “drive a wedge between the CPD and communities of color.”

While Democrats, their leftist leaders, and the media insist that the real threat to black people comes from police officers and white ‘Karens’ who try to defend themselves, the truth is in the hospitals.

Not just black people, but black children are being shot across America because of the anti-police riots.

In Detroit, a 9-year-old boy and 10-year-old girl were shot while shooting off fireworks.

In Washington D.C., a world away from where Democrat and Republican politicos sell out children like him by conspiring on “police reform” and “criminal justice reform”, Davon McNeal, an 11-year-old boy, was shot and killed while grabbing a phone charger and earbuds before heading to a July 4th BBQ.

The boy’s mother was a community D.C. Violence Interrupter and his grandfather is a Guardian Angel. He was surrounded by alternatives to police, including a city initiative that spent $10 million on community activists that were supposed to somehow ‘interrupt’ violence, but don’t stop bullets.

“What about all the black-on-black crime that’s happening in the community?”

In St. Louis, a 4-year-old boy was shot in the head over the July 4th weekend. He was one of 4 children shot on the Fourth of July in the city and one of over 60 children that have been shot there this year.

St. Louis Children’s Hospital’s ER has seen more children with gunshot wounds in May than any previous month in its history.

An 8-year-old girl was shot and wounded on July 4th in Cleveland. A 15-year-old boy was among three people who were shot in Boston in 24 hours. In Delano, California, an 11-year-old and a 12-year-old girl were shot and killed at a party. The girls were Latino and their lives don’t matter at the moment.

But in New York City, TreShawn, an 11-year-old boy was wounded while playing outside his home.

There’s a 44% increase in shootings and a 23% rise in murders in New York City. Call it the BLM Effect.

“More people not in jail,” NYPD Chief of Department Terence Monahan said, explaining the rising violence. “Rikers Island in New York is empty. Between Covid, between bail reform, the protests caused animosity towards the police, which took us out of neighborhoods that needed us the most.”

In Rutherfordton, North Carolina, Aaliyah Norris, a 7-year-old girl, was shot and killed by Shaquille Francis. Her 9-year-old older sister won’t sleep and won’t eat after the murder.

Royta Giles Jr., an 8-year-old boy, was shot and killed in a Birmingham mall. Another girl was wounded. A 5-year-old boy was also shot and wounded in Birmingham while riding in a car.

Royta will receive a tiny fraction of the media attention and leftist outrage that Rayshard Brooks did. When a movement cares more about a violent thug than a little boy, that sums its moral compass.

A 6-year-old girl was shot and killed in Palm Bay, Florida. Two children were shot in a drive-by attack in Baton Rouge. A 5-year-old and a 12-year-old were shot during a gun battle in Kalamazoo, Michigan.

Clarity Coleman, the 5-year-old, was shot in the leg while being pulled on a wagon.

“I didn’t even know that I got shot until I started feeling the pain,” Chyesha Smith, the 12-year-old, said.

70 children were shot in Philadelphia this year. A 43% rise. 96% of the child victims of violence are black.

This is what Black Lives Matter looks like in the real world.

In Minneapolis, where the city council has voted to defund the police, 50 kids from a youth football team, some as young as 5 years old, ran for cover as shots were fired by rival thugs in a park. Elsewhere, a 7-year-old boy was shot in the foot. 116 people were shot in June. That’s a 400% increase.

Sasha Cotton, who heads the city’s office of violence prevention, blamed angst and trauma from Floyd’s death. Her office’s plan to prevent the violence is to urge the victims not to retaliate.

Coach Thompson, who is black, said, “It was crazy to have 50 to 60 rounds fired and no police presence.”

But he’s considering supporting the defunding of the police.

The BLM Effect is taking black lives across America. In Milwaukee, shootings are up 95%, in Hartford, they’ve risen 36%, and in New York City, shootings are up 142%. In just one week, an extra 37 people were shot. That excess capacity can be credited to Black Lives Matter and all of its supporters.

While Democrat leaders grappled with taking down statues of the great explorer and possibly even renaming the city, Columbus, Ohio is experiencing one of its deadliest years.

Cincinnati is headed toward its deadliest year in over two generations. Murders are up 65%. The average murder victim is black. Only 4 were white.

“Each of those lives matter and the majority of those who have lost their lives this year, last year and the year before that are African Americans. It’s unfortunate to say it is at the hands of other African Americans,” Christopher Smitherman, the black head of Cincinnati’s public safety committee, said.

Smitherman is the former president of Cincinnati’s NAACP.

Black Lives Matter falsely pretends that black people are mostly endangered by police, when in reality, in some of the most dangerous neighborhoods in the country, they’re protected by police officers.

And those police officers are increasingly black.

Black Lives Matter declared war on the police on behalf of criminals. The death toll in black lives is shocking. And the toll in the lives of black children is even more heartrending. When the police leave, the criminals take over, and the hospitals and morgues pile up with the black victims of gang violence.

Supporting Black Lives Matter means not only supporting criminals over the police, it means enabling the mass deaths of black people and black children that inevitably follow in the wake of the riots.

Some Possible Character-Building Benefits of "National Service" for All