After Black Lives Matter – Los Angeles, a hate group which has partnered with the Nation of Islam and whose lead organizer praised Farrakhan, led a protest that resulted in mass attacks on Jewish schools, stores and synagogues, the leaders of 22 left-wing Jewish organizations signed letters condemning not the attacks, but the Jewish leader who spoke out against the antisemitism of the racist hate group. They made no reference to the BLM attacks on Jews.

The letters singled out Mort Klein, the President of the Zionist Organization of America, for describing Black Lives Matter as, among other things, “antisemitic,” “Israel hating”, and “extremist”. They did not offer a rebuttal to this accurate description because none is possible.

Instead, a letter signed by 16 members of the Conference of Presidents of Major American Jewish Organizations, accused Klein of hate and divisiveness. The letter’s signatories, including HIAS and Americans for Peace Now, included groups notorious for their hostility toward Israel. 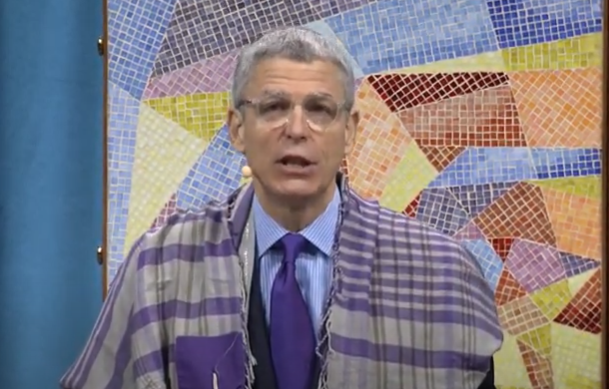 A separate letter by a slate of militantly anti-Israel groups, including J Street, The New Israel Fund, which sponsors BDS hate groups, and T’ruah, which has led a soft BDS campaign against Israel, demanded Klein’s expulsion from the Conference. That aligns with their previous calls for the expulsion of hundreds of thousands of Jews from historic parts of Israel.

The signatories to the letters by Conference members included the Women’s League for Conservative Judaism, National Council of Jewish Women, whose previous CEO had signed a letter in defense of Linda Sarsour and agreed to work with antisemitic and anti-Israel groups, the Central Conference of American Rabbis, the Rabbinical Assembly, the Women of Reform Judaism, and Rick Jacobs, the anti-Israel head of the Union of Reform Judaism.

Jacobs had previously welcomed Ayman Odeh who heads Hadash, a merger of the local Communist Party, and whose current Joint List coalition includes a faction of the Muslim Brotherhood, and praised his, “inspiring vision”. But Jacobs doesn’t think that Klein has an inspiring vision, protesting that, “Black Lives Matter is at the center of one of the most critical fights for justice in our country”, while accusing Klein of “Islamophobia” and “racism”.

The Union of Reform Judaism has been a reliably anti-Israel voice in the Jacobs era.

Jacobs opposed moving the US Embassy to Jerusalem and whined that, “Israel’s decision to bar U.S. Representatives Rashida Tlaib and Ilhan Omar from entering the country is wrong”.

Last year, Jacobs attacked Secretary of State Mike Pompeo for stating that Israeli towns in Judea and Samaria were “not inconsistent with international law”. These rants, like so many others by Jacobs, were all issued in the name of the Union of Reform Judaism.

While the Union of Reform Judaism found time to issue multiple press releases in support of Black Lives Matter, against the Jewish State, on the vital Jewish issue of withdrawing US troops from the Turkish-Syrian border, and in defense of Rep. Ilhan Omar, Jacobs and the URJ failed to acknowledge or offer solidarity to the victims of black nationalist terrorist attacks against a synagogue in New York and a Kosher grocery in New Jersey.

The URJ and Jacobs did manage to issue a press release over the shooting in a Texas Walmart and will respond to bomb threats and synagogue shootings, as long as they’re carried out by white nationalists. If your synagogue is attacked by a Neo-Nazi gunman, Jacobs and the URJ will acknowledge it, but if a Black Hebrew Israelite swinging a machete attacks your synagogue on Chanukah, Rick and the URJ will rush out a press release blasting Israel over something.

That’s the fundamental problem that Mort Klein was getting at. Jewish lives don’t matter to the URJ. Not in Israel and not in America. The only thing that matters is its left-wing politics.

While the Jewish community of Los Angeles witnessed its synagogues and schools vandalized and stores looted over Shavuot, Jonah Dov Pesner, the director of the Religious Action Center of Reform Judaism, was praising the “national rage” which saw bigots chanting “F____ Jews” and defacing the statue commemorating the Holocaust heroism of Raoul Wallenberg.

A URJ statement declaring that Black Lives Matter is a “Jewish value”, falsely accuses “white Jews” of perpetuating “the systemic racial injustices on which the nation was founded.”

That’s a line that could have come from Farrakhan.

Even as Jacobs complains about divisiveness, the URJ is dividing Reform Jews by race.

The URJ’s embrace of Black Lives Matter includes the worst elements of its philosophy, including mandated intersectionality for Reform congregations, dismissal of colorblindness, and black supremacist resource texts that include Ta-Nehisi Coates and Ibram X. Kendi, as well as James Baldwin’s 70s essay, Negroes are Anti-Semitic Because They’re Anti-White.

There’s even a White-Ashkenazi Awareness Checklist.

The racist movement here isn’t the ZOA. It’s the signatories to the anti-Klein letter.

Mort Klein and the Zionist Organization of America are willing to address the everyday antisemitism that Jews in places like New York and Los Angeles have been experiencing. And they’re willing to do it even when the bigots aren’t members of a safely discredited ideology.

There’s no great courage in taking on Third Reich supporters in 2020. The time to do it was during the Holocaust while the FDR administration and Joseph Kennedy were warning American Jewish leaders to keep quiet about the mass murder of millions of Jews. Where were URJ’s marches, protests, and sit-ins while Jews were being shot and gassed?

Reform Jewish leaders had gone to Herbert Hoover and Roosevelt, asking them to issue a joint statement condemning the persecution of Jews in Nazi Germany.

The Republican agreed and the Democrat didn’t.

Or take it from Morris Waldman, the former rabbinic leader of the prominent Temple Anshe Emeth, and the long deceased executive vice-president of the American Jewish Committee.

“Some Jewish groups have some too many times protested against Hitlerism,” Waldman complained.

Waldman is fondly remembered, within liberal Jewish organizational circles, as the “the first proponent of putting the human rights provisions in the United Nations Charter.”

There can hardly be a better summary of the utter moral bankruptcy of the same folks now accusing Jews of racism and white supremacy for fighting against antisemitism.

The Zionist Organization of America is part of the proud tradition of Jewish groups that refused to kneel to political correctness when Jews were being attacked by politically correct mobs.

Black Lives Matter is antisemitic. Its leaders declare that they’re Marxists. Portions of the movement are openly aligned with Farrakhan and the Nation of Islam. Synagogues and schools have been defaced and a Holocaust memorial was vandalized. But the organized kneelers are trying to silence any members of the Jewish community who speak out against antisemitism.

As the main targets of antisemitic violence, by either black or white nationalists, Jews and their synagogues need the police. By endorsing Black Lives Matter, the Union for Reform Judaism is undermining the safety and security of synagogues and worshipers across the country.

It’s time for URJ members to speak up and ask Rick Jacobs some hard questions.

Jewish history tells us that the real threat doesn’t come from those who speak too loudly about popular antisemitism, but those who remain too silent. There are far too many memorials and attacks on targets that carry no risk within their political cohort, and too little real resistance.

By speaking out, Morton Klein and the ZOA have offered real resistance to antisemitism.

Meanwhile, the Women’s League for Conservative Judaism, National Council of Jewish Women, the Central Conference of American Rabbis, Jewish Women International, the Rabbinical Assembly, the Women of Reform Judaism, and the Union of Reform Judaism are complicit in covering up antisemitism and silencing those Jews who dare stand up to the vandalism of synagogues, schools, and Holocaust memorials by smearing them as racists.

Organizations that claim to speak for the Jewish community have sold it out instead.

The Jewish community does not need leaders who will accuse it of racism to score points at their Manhattan cocktail parties for the Public Art Fund, but real leaders who will stand up for it.

In an article accusing the Jewish community of racism, Rick Jacobs claimed that, “fighting racism and fighting antisemitism go hand in hand”.

We’ve seen a whole lot of the former and very little of the latter.

Fighting racism and antisemitism doesn’t go hand in hand when synagogues and schools are attacked, and Jews are shot, slashed and beaten.

The ugly truth is that Jacobs and other leaders of leftist groups would much rather fight Jews, whether in Israel or in America, than get up off his knees and fight for them. Fighting Jews is safe. Rehashing the rantings of Ibram X. Kendi and other fashionable black nationalists won’t get leftist leaders in trouble. Standing up to them over black nationalist antisemitism will.

Like their counterparts in the FDR era, they’re cowards and traitors, and they know it.

That’s why they’re going after the ZOA. There’s nothing that cowards hate more than brave men who stand up for the truth. The only thing more humiliating than selling out is knowing that there was another way. Rick Jacobs and the organizations targeting the ZOA want everyone in the Jewish community to kneel before the pogromists, the bigots, and the supremacist racists.

Their message is that if you don’t kneel, they will destroy you.

Over 2,300 years ago, there was a Jewish leader named Mordechai who would not kneel. For thousands of years, on the holiday of Purim, Jewish children have sung the name of a man who would not kneel to an antisemite. Kneeling is not extraordinary, refusing to do so is.

Many other Jewish leaders no doubt knelt. Their names have been lost to history.

Those Jewish leaders with weak knees today might ponder how they will be remembered.