“It was powerful for me the way he spelled it out,” Chelsea Handler said of Louis Farrakhan. “So whatever, you know, everybody can go f___ themselves.”

Handler, a comedian pushing a new book, was responding to the backlash over her praise for the racist black supremacist leader on Instagram. The people complaining about her praise for the bigot were Jews. And the celebrity was telling critics, including Holocaust survivors, to go “f___ themselves.”

Farrakhan had called Hitler a “great man”, ranted about “Satanic Jews”, and, more recently, claimed that Florida was suffering from the coronavirus because he had asked Allah to punish Cuban Jews.

In that same speech, he thanked Chelsea Handler for posting a clip of him on Instagram. 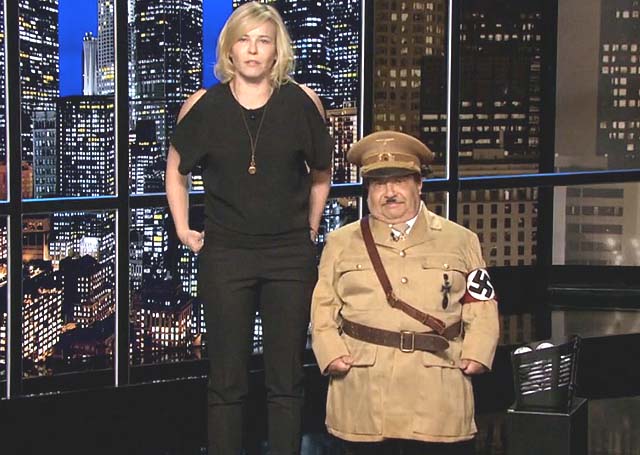 Handler decided to promote the antisemitic hate group leader to her 4 million followers as part of her newly woke brand which included a Netflix special, Hello, Privilege. It’s Me, Chelsea, and her book, Life Will Be the Death of Me, from Penguin Random House. The theme of both the special and the book was Handler’s journey from self-absorption to wokeness by ranting about how horrible white people are.

Farrakhan had been ranting about how horrible white people are since Chelsea was in kindergarten.

“I learned a lot from watching this powerful video,” Handler had told her followers

The obnoxious celebrity was well aware of Farrakhan’s antisemitism, and defended him, arguing that, “perhaps Farrakhan’s anti-Semitic views took form during his own oppression.”

While some celebrities have been cancelled for the smallest of missteps, there was no apparent sign that Penguin Random House or HBO Max, which will be airing a new standup special by Handler, were ending their relationship with the hateful celebrity. But perhaps something was happening behind the scenes because after telling Jews to “go f__ themselves”, she finally apologized and deleted the video.

The apology was stiff and unconvincing, but it was enough for her book tour to go forward, not just at Penguin Random House, owned by Bertelsmann, the massive German media giant whose owner had donated to the SS, put out exciting fare such as, “The Christmas Book of the Hitler Youth”, and benefited from Jewish slave labor during the Holocaust, but at Jewish federations around America.

After Handler touted an antisemitic bigot and told Jews who didn’t like it to “go f___ themselves”, the Miami Jewish Federation is touting a Zoom evening with Chelsea Handler to sell her new book.

The 39th Annual Berrin Family Jewish Book Festival features Chelsea and her book, courtesy of the Alper JCC in Miami, and the JCCs of Atlanta, Boulder, Dallas, Ft. Lauderdale, Indianapolis, Nashville, Memphis, and St. Louis, who have all taken Chelsea’s advice and are “f____” themselves and their communities.

No word on whether they’re also willing to help sell “The Christmas Book of the Hitler Youth”.

Why exactly does Handler, who is descended from a German mother and Jewish father, whose grandfather was a Nazi soldier, and who once had her sidekick dress up as Hitler to celebrate Germany’s World Cup victory, and then touted a bigot who admires Hitler, belong at a family Jewish book festival?

The answer is that the Jewish federations of nine major cities are telling Jews to “f___” themselves.

It’s not just that politically correct antisemitism leads to very little in the way of a response from mainstream society, or even from the organizations that claim to represent local Jewish communities, but those same organizations actually help mainstream and reward the promoters of antisemitism.

Chelsea Handler knows perfectly well that she can promote Farrakhan or mock the Holocaust, and local Jewish federations will still eagerly line up to help her sell her books and make her even richer.

The Alper JCC claims that its mission is “providing programs and services that are rooted in and promote Jewish values, ethics and traditions”. The Aaron Family JCC in Dallas claims that it wants an “environment defined by Jewish values and culture”. The Marcus JCC in Atlanta claims that it’s dedicated to “strengthening Jewish life” and creating “Jewish moments”.

Which Jewish values does Chelsea Handler represent besides a suicidal embrace of leftist politics?

The only references to Jewishness in Life Will Be the Death of Me are negative or derogatory, and revolve around her Jewish father’s response to the death of her brother. Even without the Farrakhan, Hitler, and Holocaust stuff, Handler would be the last person to be associated with Jewish values.

But so are the Jewish federations and JCCs that made the hateful decision to help her sell books.

The unwillingness of organizations with lots of J’s and little Jewishness in them to take even the most basic of stands by cancelling an event with the granddaughter of a Nazi soldier who defended antisemitism and told Jews to “go f___ themselves” isn’t cowardice: it’s disinterest and contempt.

They didn’t care during the Holocaust when millions of Jews were being killed. They didn’t care when Islamic armies and terrorists spent generations trying to wipe out the Jews of Israel. They don’t care about the big stuff, let alone the little stuff, like their celeb promoting a bigot who called Jews termites.

The vast infrastructure of the Jewish federations and the JCCs, the campus Hillels and the alphabet soup of national organizations, is a rotted mass of deadwood built long ago by people who at least had some distant sense that being Jewish mattered in some way. Built by German Jews, funded by deceased Jewish philanthropists, many of whom survived the Holocaust, they’re now just a sinecure for full-time professional non-profit fundraisers with their “inspiring” clergy and their incubators for leftist activists.

They exist to cadge money from elderly Jews who think that funding a building or a book festival with their name on it at the local JCC will be a meaningful legacy, instead of a forum for a Farrakhan supporter, by filling their fundraising letters with mentions of Jewish values, ethics, meaning, and other things they can’t define and don’t believe in. What do they believe in? As little as Chelsea Handler does.

They believe that Black Lives Matter, that the planet is in danger, that whatever Israel did last week was wrong, and whatever else their intellectual cohort of social media lefties happens to believe this week.

They’re as ignorant of what the Torah says as of the contours of the Martian mountains, but like the bigot they’re eagerly hosting, they know how to jump on the bandwagon of the cultural moment. The problem with actual Jewish values is that they are as eternal as their Creator and don’t fit into trends.

The cultural moment and its politics are momentary, filled with obvious contradictions when you try to apply them beyond the hashtags and the memes of the now. Jewish ethics and values might ask why antisemitism is acceptable, when racism isn’t, but the cultural moment has no use for consistency.

To be eternally in the moment is to have neither values nor ethics, Jewish or otherwise, and no future.

The vast billion-dollar infrastructure of organizations that are Jewish in name only are as happy to put their membership lists at the disposal of Chelsea Handler and Bertelsmann, as of Black Lives Matter. They stand for nothing, except for whatever members of their cohort are standing for now, and they make no impact on the Jewish community, and have no future once the donors and the money run out.

Chelsea Handler, like many of the celebs these organizations promote, represents them all too well.

There are no children, no values, and no future, but right now the drinks are flowing and the money is coming in as long as you spew whatever garbage is in the cultural moment without thinking about it.

Chelsea Handler’s book is titled, Life Will Be the Death of Me. The Jewish view of life is that of a gateway to eternity. That’s why the Talmud comments on Ecclesiastes 9:5 by saying that good people are considered living even when dead, while evil people are deemed dead even while they’re still alive.

Life and death don’t exist in the present moment. It’s not the now that matters, but the future eternity.

There are a great many organizations with the ‘J’ in them that are already dead because they chose to exist in the political moment without caring about the Jewish past or the Jewish future.

Featuring Chelsea Handler is their way of telling their donors and members to, “go f___ themselves”.

Pushing the Boundaries of Free Speech

Should Christians Be Engaged In Politics?