“Johnny’s in the basement
Mixing up the medicine
I’m on the pavement
Thinking about the government”
-Bob Dylan, Subterranean Homesick Blues

There are people in our lives and public figures that warrant our attention. Former Vice-President/ Senator Joe Biden is not one of those people. If Joe was not running for the highest office in the land he would not warrant anything but our ridicule and our scorn. What follows here is a satire based on Joe’s time in the basement:

I am walking in Wilmington, Delaware in a well attended neighborhood. As I pass a large mansion, I hear the distant voice of the late Etta James. I go to the backyard, no one is immediately present. I tentatively approach an open basement door. It is attached in the middle of the back of the house and looks like an old tornado storm cellar.  The music grows louder as I approach. The early cicadas are making an odd metallic counterpoint to the voice of Etta James. 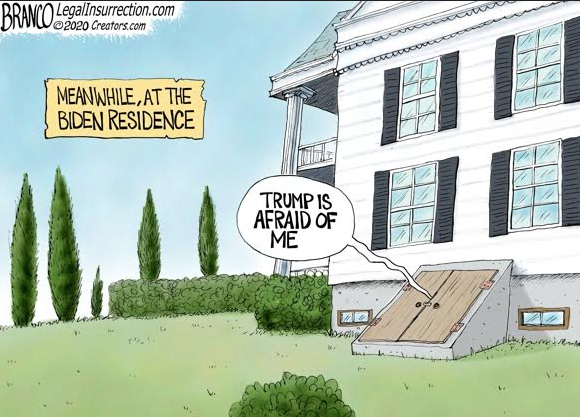 I creep down the six stairs through the open basement door. There, getting on the good foot, is Former Vice President Joe Biden. He is dancing to the Etta James/Sugar Pie DeSanto Classic, “In the Basement.” He is wearing a royal blue kimono with a frayed Chinese New Year’s Eve dragon appliqué on the back. The kimono is slightly open, revealing part of an “Obama/Biden ’08” t-shirt. A black face mask frames his chin like some bizarre attempt to resemble a dancing Abraham Lincoln.

Wow, Joe can move, if somewhat spastically. Here I thought the Democrat Party was the Party of old white men. I did not know they could dance too. Joe is oblivious to my presence as he dances like a chihuahua on a triple espresso to Etta James and Sugar Pie. He appears to be wearing only the kimono, the t-shirt and speedo underwear as the kimono opens slightly with Joe’s dancing. A brutal vision.

The song fades and Joe says in a booming stentorian voice, “Welcome to my rally!”

A couple of Secret Service Agents burst into the room, looking like they were late for dinner.

The agents, doing their job, give me a perfunctory frisk and they go back to guarding Dancing Joe.

Biden’s basement is huge, there appears to be about three hundred, folding chair seats set up.  So far, I am the only audience member for the Joe’s rally.

“I need to go get dressed for the rally,” says Joe. “Guys, take this gentleman to the hospitality room.”

The guys take me to a side hospitality room where a broad buffet table is laid out. There are the standard finger food sandwiches, dips, various punch bowls, and some bizarre side items like Cheese Whiz and crackers. There are also some dishes containing what appear to be brown only M&M’s. I get a glass of punch, take a couple of egg salad sandwiches and scoop up some of the brown M&M’s.

I go back to the main room and start noticing some of the pictures hanging on one of the far walls. I notice immediately the pictures of Biden with Barack, Biden with Hillary, family shots.  I also notice a picture of Biden with the unrepentant racist, Senator Robert Byrd. In the Picture, Byrd is in a wheelchair and Biden is holding up one of Senator Byrd’s arms up in triumph. Is that a portrait of Bill in a blue dress next to Bush sitting on the floor playing with paper airplanes and building blocks? Are these facsimiles of the portraits that were found in Epstein’s brownstone?

In addition, there is also what appears to be a newer picture of a masked Joe kneeling symbolically before members of Black Lives Matter. I hear some movement behind me. Coming down the stairs are some people, looking  to be part of Joe’s Basement Rally, I guess. They are a colorful bunch.  They almost seem like a casting call for a reformation of the 1970’s group, The Village people. Men in construction worker garb that appears to be more like a costume than a uniform. Masked Antifa-like characters who may be there just for the grub as they ask upon entering, “Where’s the food?”  There are also folks from the neighborhood, well dressed and curious.

Is that North Carolina Governor Roy Cooper wearing a standard pin stripped black business suit   escorting Senator Elizabeth Warren? Senator Warren is dressed in full American Indian Chief garb, complete with the full headdress. If she can’t be President, I guess she has opted to being a Chief.

The crowd grows larger. One the members of the crowd stands out among the colorful.  It is a young woman with long brown hair, barracuda smile attractive. She wears what appears to be a red and white cheerleaders’ outfit that has “Bronx” in raised white letters on the front.  She looks just like Congresswoman Alexandria Ocasio-Cortez.

It is AOC!  She skips over wearing a mask on top of her head and introduces herself, “Hi! I’m Alexandria!”  I reply, “Nice outfit.”  She beams at me, while adjusting the mask.  “You like it? I tried to get the Squad down here dressed the same, to cheer for Joe, but I couldn’t convince them.” AOC was referring to the four women known as “The Squad” in Congress. That includes IIhan Omar, Ayana Pressley and Rashida Tlaib. Together they are the Four Horsewomen of the Clownpocalypse.

There is some moment in the back room. AOC says, “I need to go introduce Joe.” There are now about 50 attendees for Joe’s rally. AOC bounds up to the podium, with a pom-pon in hand. She cheers the following:

“Gimme a B, Gimme an I, Gimme a D, Gimme a D…”  A Secret Service Agent hurries over and whispers into AOC’s ear. She continues, “I mean, Gimme an E, Gimme a N. What’s that spell?”

The crowd gives a perfunctory response,” Biden.”  Joe bursts through the curtains that were separating the back from the front room.

Biden is wearing a navy blazer, pin strip Pendleton shirt, dress slacks, loafers with tassels and a mask framing his face like an Abe Lincoln beard. Masks are worn by everyone in the crowd. Some are crocheted so they don’t restrict oxygen intake.

Joe booms into the microphone: “Listen up all you lying dog faced pony soldiers it’s no malarkey I’m going to make America moral again, but first let’s call President Trump a racist and than do a jig!”

The Etta James/ Sugar Pie DeSanto song is played over the P.A. loudly.

AOC starts doing a version of the 1970’s dance, “The Bump,” with Joe and she almost knocks him down. Joe has no hips despite his attempt at being hip. This is a little too bizarre, even for me. I inch my way out, slowly going out the open basement door. One can only take so much bad dancing…

I wake up in my bed from this feverish dream. This strange nocturnal satire is over. The ghostly voice of The Band’s Richard Manuel is singing through my sweaty headphones.

“We can talk about it now
It’s that same old riddle,
only starts from the middle…”

Thinking about it, Joe Biden and President Trump need to talk about it now. Joe is creeping out of the basement, but America needs a debate Joe. We need something besides hostile bully tactics when someone questions your questionable behavior and even more questionable record. Are you concerned about Ukrainian collusion questions, questions about your coke laden son’s criminal deals? Grow a set, Joe.

To President Trump, glad that you are placing law and order on the streets and taking it out of the tweets. Time for you guys to go head to head, online, or on top of Mount Rushmore, I don’t care.  Time to lose the cowardice, time to lose the arrogance, time to tell us what your plans are for the next four years, gentlemen.

Time for all us to leave the basement of our current reality and vote in November.

Mob Mentality: Thanks to Leftists, It's Getting (More) Dangerous Out There