A recent announcement regarding a decision by the City of St. Petersburg, Florida, to completely restructure the manner in which the city provides response to calls for assistance through the 911system is inviting all sorts of trouble.

Included in that plan is the intention to eliminate having a police officer respond to as many as eleven categories of calls routinely received through the 911 system. Instead, a new “division”, known as the Community Assistance Liaison, will be sent to deal with the following call categories:

Having been a police officer in the early 1970s (a time of similar animus being aimed at police officers but without the specific accusations of racism), I consider myself qualified to at least make some general observations about just how stupid, ill-advised, dangerous, and insane this decision will prove to be…just wait.

In my experience, having responded to nearly every one of the above-listed call categories during the time I spend in uniform, I can attest to the fact that they all have a strong potential to start off peacefully and deteriorate rapidly to often life-threatening situations. Given that the entire approach to “police reform” is admittedly being conducted in hysterical response to George Floyd’s death, it is a near certainty that these CAL representatives will not be armed with anything that could remotely be called lethal.  So, what happens when things go to “hell in a handbasket” and there is nobody there to assist the unarmed CAL person?  Bad things will happen.

If a person is intoxicated and disorderly enough to have someone call the cops on them, there is a serious potential for violence. The same can be said for any intoxicated person given the fact that there are only a few things that a CAL person could do that would not involve detaining someone to prevent them from driving or hurting themselves or someone nearby. Nearly every call I responded to that involved a fight or physical confrontation of any consequence was with either drunks or mentally ill individuals.

Mental health calls would be among the most dangerous given the potential for irrational behavior or resistance to being detained. A suicide call puts the CAL person in the position of being expected to do what a doctor or trained police negotiator can only do in certain cases. A suicidal person can instantly decide that rather than face confinement or embarrassment they could just as well take someone else with them. Keep in mind, also, that mental illness is quite prevalent within the homeless community. Don’t think bad things don’t happen.

Any one of the remaining listed categories also has the potential to escalate with nobody available to aid the CAL in subduing and detaining the subject/suspect. Even with the Elementary school kid, If the teachers and administrators have to call 911, there has already been violence involved. Otherwise, they could simply call a parent to come pick the kid up, right?

The result of this action can be easily predicted to create a whole plethora of workers’ compensation problems for the city when CALs are injured as they surely will be. 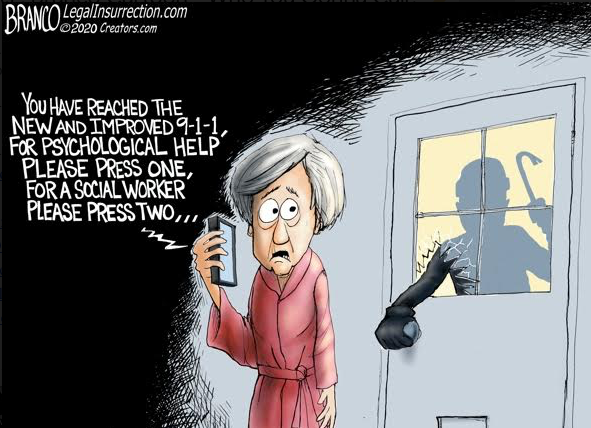 Then there are the questions of where these individuals will be recruited from. What sort of pay scale they will receive, what type of training will be involved? How many times will these people receive calls and wind up pulling in a police officer to assist? This could result in an already understaffed department having fewer officers on the street to respond to calls for service that can also be just as life-threatening, if not more so. Will one of those officers distracted from service by a CAL request for assistance be absent when needed by a fellow officer or a member of the public that is in dire need of help?

Only time will tell, but St. Petersburg officials will very likely need to enlarge their contingency fund to cover the lawsuits that are coming, or they will end this utterly ridiculous virtue-signaling effort before the end of the one-year test period. Meanwhile, the police force will be attempting to fight crime with one hand tied behind their back…probably the one that they would typically use to draw a firearm in the line of duty.  Good luck, citizens of St. Pete! Y’all will need a lot of it in the coming year.

Perhaps it is time for people to find some new city officials to vote into office. The ones St. Petersburg’s citizens have now do not have their best interests at heart.

Bevelyn Beatty: Why I Painted Over the BLM Mural in NYC