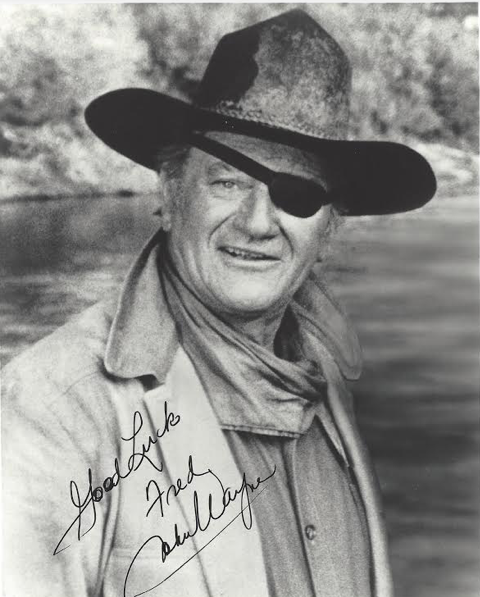 These ridiculous rewriters of history and destroyers of what is America have been going after every target they can find from George Washington to Frederick Douglass. Now after successfully going after several classic books and films they are concentrating on an American film icon, John Wayne. First they went after the airport named after him in California and now the John Wayne exhibit in the main hall of USC’s School of Cinematic Arts will be removed. Why? Based on something obscure he said in the 1970s. The real reason of course is because he is highly respected by conservatives for supporting the America Way and what our forefathers fought for.

John Wayne during his lifetime has represented for a number of people honesty, integrity, and patriotism. His film career began in the 1930’s and Stage Coach gained him the classification of a class A Western star. This is not to take anything away from what they called class B as to this writer Roy Rogers. Hopalong Cassidy, Gene Autry and others were always at the top. Wayne himself never cared for such classifications and felt the same way about race and ethnic groups.

Actually John Wayne was not racist and those who knew him personally could vouch for this. His marriages were to Hispanic ladies and he not only had many African American friends, he also helped some get major roles in films Wayne was also a Christian though he did not believe in organized religion. He did affiliate with a church before his death. The first film he got to select as a producer and star was The Angel and The Bad Man. A film with a heavy Christian story and Steve Skelton used it in his Bible Study Film series which this writer has used in Bible Study classes. This is available on Amazon. Another Christian related film Wayne starred in was Three Godfathers. A close relationship to Christmas and the Nativity.

Certainly he was not a sexist and at a time when women screen writers were seldom encouraged to be involved with Westerns his favorite was Leigh Brackett. My wife and I had the privilege of having Leigh as a guest in our home during a local media event in 1977 and she had interesting stories to tell. She had just written “The Big Sleep” for Humphrey Bogart when she was encouraged to switch to Westerns. What she liked about The Duke, who recruited her, was his relationship with all cast and crew members. They were his equals no matter what their position, race or ethnic background. What he liked about Leigh was that she stayed on the set, wore jeans, and was willing to play cards with the boys. She and Wayne were also chess competitors.

John Wayne had great respect for Leigh’s work and especially for Rio Bravo, in which his costars were Dean Martin, Ricky Nelson, and Walter Brennan. He liked it so much that a few films later she was invited to meet with him to plan his next film. He started the meeting by saying to Leigh, “I would like to be in a film where I come into a town and find a sheriff friend of mine has become the town drunk. I make it a point to help. I have to lock up a cowboy for killing someone. This fellow has a family that controls a big ranch and much of the town and they threaten to get the boy released. All I have to help me is the sheriff I’m trying to sober up, a young gunslinger, and an old guy who is the guard for the jail.”

“Why, Duke,” Leigh exclaimed. “That is basically the plot I wrote for Rio Bravo.”
“Well,” Wayne smiled. “It worked great before and it’ll work again.”

It did work again, though the film was titled El Dorado and costarred Robert Mitchum and James Caan. It too was successful, and we have heard fans debate about which was the better film. She also wrote Rio Lobo and Hatari! for Wayne, and though uncredited, was involved in what some critics have called his best film, The Searchers.

During his lifetime John Wayne made more films than any other living star and continued doing so when other big names like Jimmy Stewart and Henry Fonda had a hard time getting film roles and were switching to television. The Wayne films are still being shown over and over on television and though he died in 1979 this past year in a vote of top stars he came in third.

The Duke had a very direct way of talking, one that could offend liberals who certainly knew as far back as 1968 his political leanings when he spoke at the Republican National Convention and supported Richard Nixon. Though he died before the 1980 election he was a friend and strong supporter for Ronald Reagan. Wayne also was a big supporter of our troops his film The Green Berets made liberals very upset as he obviously endorsed our being in Vietnam.

So why would the haters be after John Wayne today? Because of what he represented, an American we could look up to and who today is still a patriotic icon who has the admiration and love of Conservatives and true Americans.

It's Not What You Think: "2020 The Movie" Starring a Bunch of Leftists