Deanna Lund growing up was not a star struck little girl with a yen for Hollywood. That was the farthest thing from her mind as a child. 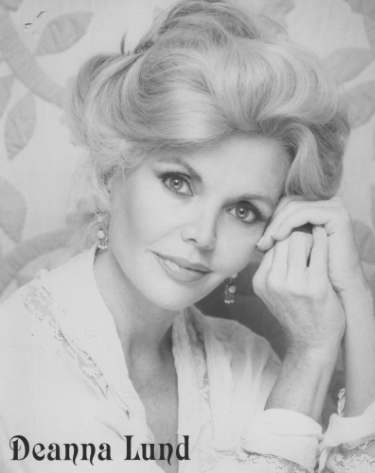 As a child in Florida, her only screen idol was Roy Rogers. That was primarily because she was riding in rodeos at the age of ten. She was interested in Country-Western music and wrote her own songs which would make her more a candidate for Nashville than the film capital. Her popularity in rodeos and horse shows was such, that her first modeling was done on her horse “Dynamite,” for covers on programs. Dynamite was named for her dad whose editorial column in Chicago when they lived there was titled Dynamite Lund.

Later Deanna would ask “How did a clean cut kid like me wind up on the wicked stage”? Some journalists have assumed that because of Deanna’s athletic ability, looks and sunny disposition, the road to stardom was strewn with roses. It wasn’t and she admits, “I had to pay my dues.”

In high school, Deanna first went on stage because her father thought it would help her get over her shyness. She became hooked, though acting as a career didn’t seem to be in the cards. He father was opposed to the idea, especially the idea of motion pictures. However, after school she entered into a marriage that didn’t work and found herself forced into a wide range of occupations. With two babies to support, Kim and Randy, she moved to Miami where she had a variety of jobs including a car rental agency, running a modeling school, TV weather, news and sports casting, and appearing in commercials.

Her first films were learning experiences. Deanna took any bit role she could find. “I went bicycling from studio-to-studio to work as an extra. or to take a small part. This generally wasn’t approved by the studios, however many of us did this to make a living.” Some of her small roles were well reviewed such as Our of Sight and she had the opportunity of working twice with Elvis Presley. The Presley films, Hawaiian Paradise and Spinout, gave her an opportunity to meet “the king”. “Elvis didn’t seem interested in me as I had my babies on the set and he probably felt, ‘Mama, you need to be home washing diapers.’ If only I could have afforded to do just that.” Her children were always first with her. She also had to work in time for drama classes. This was far from the image Hollywood had with instant stardom awaiting the newcomer. Deanna was beset with every problem faced by a single mother from inept baby-sitters to life threatening illness.  It was her religious faith that sustained her.

She was so anxious to get back home to Florida, she had her agent get her a role in Frank Sinatra’s Tony Rome being shot in Miami. This looked like an easy ticket to end her film career.

Deanna Lund was already known on TV due to appearances on Batman, Bob Hope Chrysler Theatre and numerous other TV shows. In the works for 20th Century Fox was Irwin Allen’s Land of the Giants. Tony Rome was a Fox film and Allen saw the dailies which made her a cinch for a part without even an audition. Deanna had a hard time believing it was true when her agent called her and nearly hung up on him. She was still skeptical when she arrived in Hollywood to meet Allen for the first time. Thus Deanna Lund became red headed Valerie Ames Scott in Giants.

Land of the Giants had the task of making viewers suspend their disbelief long enough to watch seven castaways survive on a world of hostile giants. Deanna’s task was to flesh out and give substance to the role of a shallow rich girl. During the two years the show was on air, her character was viewed by many as the most evolved And interesting. “I was kind of a bad girl turned good girl and this was not deliberately done on my part or the writers. It was just something inside me that came out. I felt it was a God thing.” Despite week after week of enduring such perils as hanging by a rope over flames, several times having an ape carry her off, being taped to a table and dropped into a specimen jar, she managed to pull it off. By the end of the series, Deanna Lund was one of the most popular actresses on television and she was more than just a screaming victim. She was now an accomplished and recognized performer. After the Giants series was cancelled, she married co-star Don Matheson. Their daughter Michele Matheson is an accomplished actress and author herself today.

With Giants behind her, Deanna made a number of appearances in shows such as The Waltons and The Incredible Hulkas well as movies made for television. Her greatest impact for the next few years was starring in the soap operas,General Hospital and One Life to Live. For many actresses, that would be more than enough. For Deanna, it was to be evidence that nothing could be taken for granted.

There were problems ahead, not the least of which was a terrible mugging that nearly took her life. The attack nearly destroyed her emotionally and it was only her strong faith in God that helped her survive. “God put people in my life that got me through it” she explains. She could have been mentally scarred for life and the fight to restore herself was an event that truly would be considered an inspiration. “I was even told by one well known actor/director that I was through in Hollywood as I couldn’t do a scene with a man who was a mirror image of the one who mugged me.”

Deanna’s film career took off again in the eighties with a most notable female lead in the Jerry Lewis classic Hardly Working. She also made films with independent producers. In the nineties, this led to more films on TV with the most noted being her role as a police woman in Red Wind.

Another change for her came in the mid eighties when she was a guest at her first science fiction and fantasy convention, RoVaCon (Roanoke Valley fan Convention). Deanna was amazed at what a fan following she had and soon there was a support group formed. Titled  Friends of Deanna Lund, it had the largest membership of any non studio or agent-run fan club in America. She resisted calling it a “fan club” and its chief charity was Victims of Violence No More. The membership ran from Germany to Australia and from Canada to Brazil. Within RoVaCon she helped establish a new Drama Scholarship and introduced the idea of conventions holding Drama Workshops. Later she became a co-founder of a strictly designed media convention she herself named, Rising Star. Both the latter and RoVaCon were head quartered in the Roanoke Valley of Virginia..

In addition to her workshops she was also active in chapel programs conducting music presentations. The latter led her back to song writing and she later performed in several churches in Florida.

Deanna loved the idea of our Christian media program Point North † Outreach and helped convert the media show programming into a series of Christian Media Conventions. She became one of the first directors of our organization, a position she held until her death due to cancer two years ago.

During her last years Deanna continued her own “outreach” work until she was called to be with the Lord, never once backing down from helping with a charity which even included encouraging abused animal adoption.  As she so often told us “Just when I think I can’t do something, that I don’t have the strength for, God says ‘You go gal!’. It’s an offer I can’t refuse.”

Before her death Deanna had the pleasure of seeing her book Valerie in Giantland published. Sold on Amazon, all proceeds go to cancer research. The book takes place years after the time setting of the TV show and has spiritual insights.

Conservative Momma Asks: What Lives Did Jesus NOT Die For?

Greenfield: Hundreds of Streets and Schools are Named After a Black Nationalist Ally of the KKK