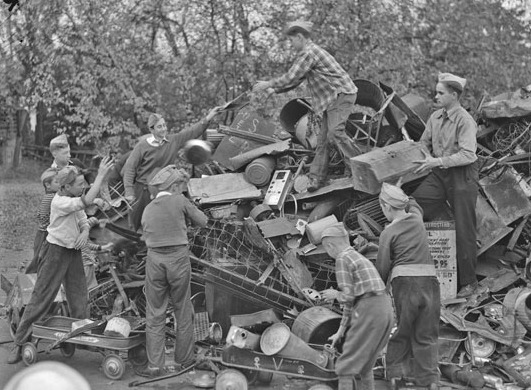 A comparison comes to mind when we look at the division we have in this nation. There is real hate shown between groups coupled with mob violence by anarchists pretending to be fighting against racism. You have to also think of the children who are either quarantined in their home due to Covid 19 or out in areas where this destruction is taking place, many being killed in our major cities. What are these children thinking as they watch the news on TV and hear adults in their families talk about current events?

There was a time when it would seem that we were in greater peril than any time in our history, when families were divided not due to political differences but because of family members serving in the military. This was from 1941 to 1945 during the greatest and more horrific war the world had ever known. Newsreels showed us the images of war torn cities and towns in Europe and Asia and we were given the feeling it could happen here. In addition to family members putting their lives in jeopardy overseas we had air raid drills and rationing as daily reminders of possible danger to our own lives. On the face of it more frightening than a virus that has taken the lives of only one percent of those who have caught it. It would seem like the safest and best time to close the schools, keep children at home to know they would be safe.

On the contrary, kids were very much involved in what was going on and as one myself during those years I felt I had a duty just as any adult would, to do my part. The very grade schools I attended became like munition plants to fight the Nazis and minions of Tojo. We were filled in by our teachers about the events of the day and even the popular Weekly Readers detailed what children in England, France and China were going through. This was a fight that involved every American and never in my memory has our nation been more united.

I may have been of primary school age, but none the less I joined neighborhood kids in pulling wagons normally used for play from door to door. Every boy and every girl of every race was involved. There were paper drives, and scrap drives that we knew would be used for the war effort. Our classrooms competed to see which could collect the most and there were signs we put up everywhere to promote the cause. I remember years later when in a doctoral class I shocked a couple liberal classmates when I told them about one sign I made, “Every piece of scrap will kill a Jap.” They were upset that I felt no remorse having that sentiment. “No” I assured them, “not when I had a foster brother in the marines who was taken prisoner by the Japanese, tortured, escaped and lived to continue fighting for not just his life, but ours as well.” I felt like I was fighting side by side with him. We also went out to the county side to collect a plant called Milkweed that was used for life jackets. We continually sold what were called “War Bonds” to raise money to keep our defense machine going.

Yes, that was a long time ago and today we naturally do not expect to see school children out working the neighborhoods collecting needed items to help us get through this chaotic time. I am not saying we were any better than today’s kids, if anything today’s children should be superior to any past generation and the true hope of the world. Sadly they will not be unless we can repair a damaged education system and not permit the erasing of our history.

There is a tint of liberalism in both our public schools and in our colleges and universities that is polluting the minds of our children and has been going on for decades with the results being seen today. Our youth are being taught that we are a racist nation, that capitalism is bad and that socialism is good. We hear every day about conservative students being discriminated against and conservative teachers being fired because of their views. As one who has taught for forty years I know that today I would not last one semester in a public school classroom for speaking the truth. Books I might encourage being read are being banned and people I would have lessons about are having their statues torn down and destroyed. Apparently educators who would fight the good fight and keep the faith have their hands tied.

Are there solutions, I would pray so. There are multitudes of people out there who are sick of this, a silent majority, a great many of whom are Christians, who need to get involved. There is a need for people to speak out, make their voices heard and to get to the polls in person and vote. I have a new motto to fit the age.  “Every word of Truth will bear Fruit.”
Share
Facebook Twitter Pinterest Reddit Share via Email Print

"Hate" Isn't the Way to Unrig the System

Greenfield: Every Sports Team Must Change Its Name